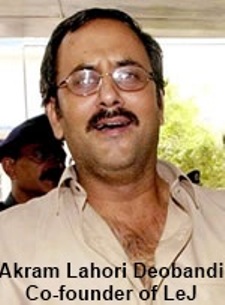 Muhammad Ajmal (Deobandi) alias Akram Lahori is reportedly the present Saalar-i-Aala (‘Commander-in-Chief’) of the banned terrorist group Lashkar-e-Jhangvi LeJ, and is directing LeJ’s terrorist activities from a prison where he is enjoying access to mobile phone, TV, newspapers and other elements of hospitality facilitated by the Saudi government and its servants in Pakistani State.

Akram Lahori along with Riaz Basra and Malik Ishaq formed the LeJ (an offshoot of Sipah Sahaba Pakistan SSP) in 1996, Pakistan’s most dangerous Takfiri Deobandi militant group, affiliated with the Al Qaeda and Taliban. The newly formed group took its name from Haq Nawaz Jhangvi, one of the co-founders of the SSP.

Akram Lahori and Riaz Basra gained notoriety when they orchestrated the assassination of Iranian diplomat Sadiq Ganji in Lahore. They killed hundreds of Shia Muslims in Pakistan particularly in Lahore, Bahawalpur, Multan and other areas. They were also involved in the killing of Iranian Air Force cadets visiting Pakistan in the early 1990s, when sectarian attacks on Shias in Pakistan were at their peak. After Basra’s death in May 2002, Akram Lahori succeeded him as leader of LeJ.

Lahori (who originated from a Deobandi family in Bahawalpur, Punjab) was originally with the Sipah-e-Sahaba Pakistan (SSP), which he had joined in 1990. Subsequently, in 1996, he along with Malik Ishaque and Riaz Basra founded the LeJ and launched terrorist activities in Punjab. He also reportedly established a training camp in Sarobi, Afghanistan after securing support from the erstwhile Taliban regime there.

Lahori succeeded Riaz Basra, who was killed in Mailsi, Multan on May 14, 2002.

Lahori is himself in police custody following his arrest in Orangi Town, Karachi, on June 17, 2002 based on information provided by Shabbir Ahmed––an LeJ cadre who arrested by Karachi police in Gulzar-i-Hijri on the same day. Police also recovered two Kalashnikovs and two TT pistols from the possession of Lahori, who was carrying head money of Rs five million announced by the Sindh government and another Rs five million announced by the Punjab government. Five accomplices of Lahori were also arrested on the same day. At his arrest, a senior member of the LeJ, Qari Ataur Rahman alias Naeem Bukhari, issued a press statement expressing the apprehension that Lahori might be killed in a “fake” encounter. Rahman was himself later arrested from his hideout in Gulistan-i-Jauhar, Karachi. Rahman is allegedly involved in the abduction-cum-murder of US journalist Daniel Pearl. It is, however, not clear if Lahori has passed on the mantle to any one else, or continues to head the outfit while being in detention.

Lahori, according to reports of July 2, 2002 quoting senior police officials, was involved in 38 cases of sectarian killings in Sindh. These included the killing of Ehtishamuddin Haider, brother of Federal Interior Minister Moinuddin Haider, Pakistan State Oil Managing Director Shoukat Raza Mirza. Besides, he was also involved in the massacre at Imambargah Mehmoodabad and in the murder of Iranian cadets in Rawalpindi. Lahori reportedly confessed during interrogation that he was involved in 30 cases of sectarian killings in Punjab, including those of 24 persons who were attending a Majlis in Mominpura. Also he revealed that his group had planned to kill Interior Minister Moinuddin Hiader, but due to tight security measures, murdered his brother instead. Consequent to the death of Riaz Basra, Lahori was acting as LeJ chief and he himself reportedly monitored and perpetrated sectarian killings in Karachi where he was residing for the last one and a half years.

Official sources hold that LeJ terrorists frequently cross over into Pakistan from Afghanistan using unfrequented routes, commit bank robberies and sectarian-related killings. In October 1997, a Pakistani news report quoted Malik Ishaq, a top LeJ terrorist currently under detention, as saying, “I have been instrumental in the killing of 102 human beings.” Malik Ishaq was later released due to relentless efforts by Sahbaz Sharif and Tahir Ashrafi both of whom are eulogized by a Lahori Liberal who currently directs a pro-establishment think tank.

The LeJ was responsible for the Lahore Mominpura Cemetery massacre on January 11, 1998, in which 25 Shia Muslims were killed and 50 others injured. Most of the victims were women and children who had gathered for Qur’an-Khwani (Quranic recital) at the cemetery. Aziz Gujar, Haroon Mansoor, Riaz Basra and Akram Lahori were the main accused in this massacre. While the first two were arrested, Basra and Lahori evaded arrest.

Acting upon information secured from LeJ chief Lahori and Rahman, police recovered 134 Kalashnikov rifles, rockets, landmines, explosives, chemicals, and poison-filled capsules. Karachi Police also arrested the wife and a son of Lahori who were later released. Lahori was also taken to Punjab and, based on his information, police and agents of US Federal Bureau of Investigation (FBI) raided various places and arrested several suspected terrorists.

In 2002, the police has released a list of some 33 cases registered against Mohammad Ajmal alias Akram Lahori in different police stations of the city. Details have also come to light about the terrorist activities of Akram Lahori in Punjab where the government had announced a cash reward of Rs2.5 million for his arrest.

The list issued from the Central Police Office in Karachi accuses Akram Lahori of killing and injuring many people belonging to the Shia community.

Meanwhile, as per his own statement, Akram confessed to investigators in Karachi that he was involved in 30 cases in Punjab.

Most of the 30 cases were committed by him in Jhang, Lahore, Rawalpindi, Sheikhupura, Qila Deedar Singh, Qila Gujjar Singh, etc.

In Punjab, he started terrorist activities from Jhang on Oct 14, 1991.

He killed six Iranian cadets at Westridge, Rawalpindi, on Sept 17, 1992, only two years after the founding of Lashkar-i-Jhangvi in 1990.

Another major terrorist action was carried out by Akram Lahori in Mominpura, Lahore, which left 24 persons killed and 28 injured in 1998.

Akram Lahori was also involved in the Dera Ghazi Khan jail break on Dec 26, 1997, in which they tried to get their arrested activists released.

The killing of DSP Tariq Kamboh along with his guard in Hunjarwal, Lahore, on Dec 16, 2001, and attack on Imambargah Najaf, Pir Wadhai, Rawalpindi, on Feb 26, 2002, in which 11 persons were killed and 14 injured were two other terrorist cases against Akram Lahori.

In April 2003,an anti-terrorist court gave the death sentence to Mohammad Ajmal, popular as Akram Lahori, and two other men last year’s sectarian killing of a doctor.

The court also sentenced them to death for a double murder of two Shia leaders, Anwar Tirmizi and Zulfiqar Haider, who were killed on March 11, 2002.

In the latter case, the prosecution examined 13 witnesses including three eyewitnesses. One of the eyewitnesses, Tirmizi’s brother, had identified the three killers in the trial court during the depositions on the last hearing on April 19.

The convicts are also facing trial in another court on the charges of killing Shaukat Raza Mirza, managing director of Pakistan State Oil, in 2001. Judge Khan Pervez Chang has reserved the decision in this case until Wednesday. The prosecution had presented 19 witnesses in this case including three eyewitnesses. The 62-year-old managing director was murdered on July 26 while he was going to office in his car. Police had arrested the three last June.

Akram Lahori was 2nd-in-command after Riaz Basra, who was killed in a police encounter in Punjab.

It is alleged that some influential Deobandi clerics and fake liberals are currently using their influence to get Akram Lahori acquitted, not unlike the acquittal of Malik Ishaq due to tireless efforts by Shahbaz Sharif and Tahir Ashrafi.

Akram Lahori is an uncle of a known female NGO-activist based in Islamabad. https://lubpak.com/archives/242737

In 2010, Additional District and Sessions Judge (East) Obaid Ahmed Khan acquitted Akram Lahori in a murder case of Mumtaz Haider for want of evidence. Mohammed Amjad alias Akram Lahori was booked in the murder case of Syed Mumtaz Haider on July 20, 2001 by Brigade police station. He was arrested on July 4, 2002 and was lodged in jail then since. The informed sources said that the family of Shaheed Mumtaz Haider due to the threat of Lashkar-e-Jhangvi terrorist group was avoid to give the statement in the court and the session court acquitted the terrorist Akram Lahori, involved in the killing of hundreds of Shia Muslims in Pakistan was released in another case due to the lack of evidences.

Facing trial in Multan, Akram Lahori, responsible for the killing of such well-known Karachi figures as businessman Shaukat Mirza and dozens of prominent Shia doctors, was indicted in 2010 after living comfortably in jail for seven years. Witnesses against him in Multan continue to die or disappear.

In the meanwhile, the Akram Lahori Group (of LeJ footsoldiers and their fake liberal patrons) has been able to successfully expand the wave of Shia genocide from Karachi and Quetta to Peshawar and other areas of Pakistan. Shia, Sunni Barelvi, moderate Deobandi and Salafi, Ahmadi, Christian, Hindu etc continue to die while pro-establishment right-wingers and fake liberals continue to obfuscate terrorism by Takfiri Deobandi terrorists.