I was alerted to Junaid Jamshed’s nonsense on Nida Yasir’s Good Morning Pakistan show by this timely written piece by Ayesha Mir. She writes:

I knew this could not be all and JJ must have added a lot more nonsense as he has been over the year after his reincarnation as Tablighi Junaid Jamshed Kurtay Wali Sarkar. Few years back he was found giving fatwas in favor of Lays chips declaring them Halal which ended up in a Mullah-fight (read cat-fight) and earlier last year he was cashing in on Halal vaccines; YES! you heard it right – now medicines need a certificate of Halalnees from Raiwind.

Nida Yasir’s show Good Morning Pakistan is not more ridiculous and meaningless than any other morning show – its the usual time waster but stands out for overt display of expensive fancy clothing, seems like advert for makeup brands and is filled with new Bollywood dance moves. It is a presentation of luxury, lifestyle modernity and lifestyle liberalism. She has done series of shows on Wedding, Mehndi and Love theme and a Valentines week is lined up.

Having said that, she invites Junaid Jamshed and he puts the condition that she has to cover herself and put a Hijab on her head – guess what? She does it. Why? TRPs matter my friend. Money matters. Mullah JJ starts the show telling her to ask her audience how does she look now. Now some readers might object saying this is her personal choice, well I don’t believe so. The reason for a personal choice is triggered from within you. Here, we have a Mullah forcing a host to dress up in a certain way and the host bows down because she wants more viewers.

I have several objections on the show, which can be watched here, but would like to summarize a few statements which Maulana Lays made on the show:

The more a mother covers her body, the more her daughter will respect and obey her. – Narrating a personal story he tells the audience that once a mother complained that her daughter doesn’t obey her and the response was that she needs to cover herself better.

A wife should be quiet  and the husband shouldn’t joke with the wife when the husband’s mother is present in the same room. – Unsolicited marriage advice by Maulana Lays which makes no sense at all.

A husband only involves himself in extra marital affair because his wife isn’t doing enough. She is to be blamed. – As one would expect, misogyny of the worst order but the host continues to giggle.

If you want a happy life, do not teach your wives how to drive a car, do not let her go outside. She might leave you. – Narrating his personal experience Mullah Halal says that his wife was a beautiful woman and he would not trust her and didn’t teach her how to drive. He was insecure someone might flirt with her and so always kept her indoors and advises the same to all male audience.

No woman would ever need to drive a car or go out. This is a hypotethical scenario and all Muslims should avoid hypothetical scenarios and be real. – The only time on the show when Nida Yasir countered Junaid Jamshed was when he said that women should not be taught to drive cars. She responded saying what if a woman has no male member in the family and has to go out to for necessary day to day tasks? Maulana Lays completed rejected this calling it hypotethical, basically, all women have a male family member to do stuff for them. 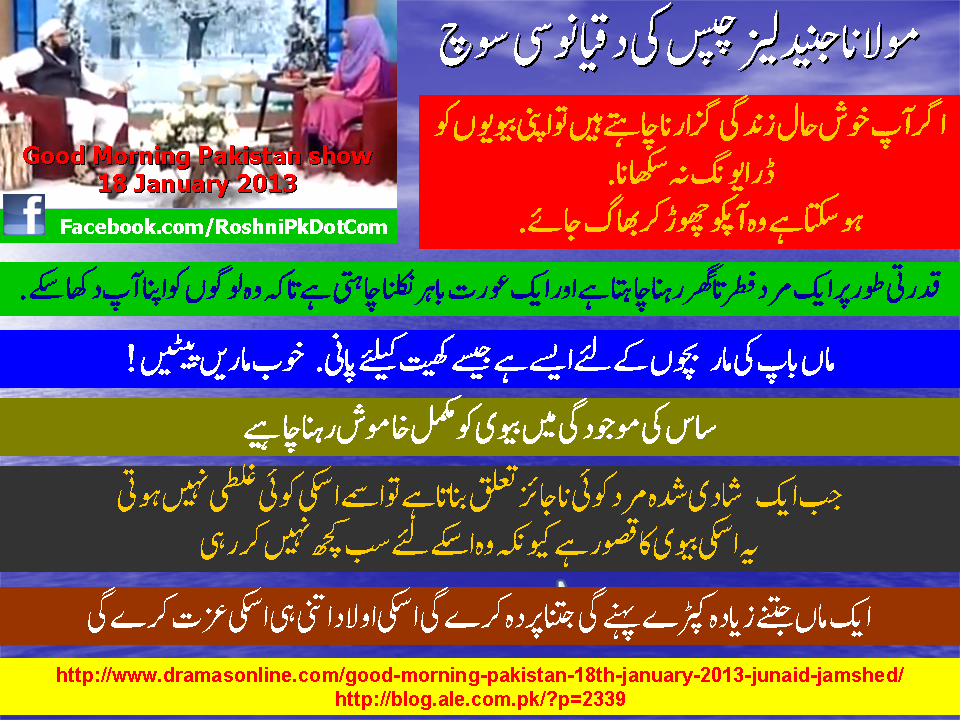 I am writing this to put the blame on Nida Yasir, ARY Digital’s management and Pakistani media in general for allowing such content to go on air. I do not blame Maulana sahab much because he sincerely believes in this nonsense. What better platform will be get to publicize his nonsense than national TV accessible to millions of people? Maulana Sahab has overtime sold off religion for money, he has spill misogyny time and again, he has overtime shown no empathy or sense. Not long ago, when 19 poor women were killed in a stampede trying to get free food, the Maulana who enjoys a luxurious lifestyle by selling Islam blamed the women demanding “Ghareeb ka Iman” should be strong. He added the poor should not ask anyone for help, wait for three days and food will be sent by Allah. I wonder if Maulana Sahab can do the same; instead of cashing in on Halal chips and vaccines, see if God send Man-o-Salwa for him. A demonstration always help, doesn’t it?

First, Nida Yasir, hungry for TRPs; bowed down to the demands of Maulana Sahab to dress up in a particular way, and then throughout the show she silently took all the misogyny and nonsense unchallenged. Not just that, she seemed to agree with all that, continued to respond in affirmative and adding giggles here and there. In short, she glamorized misogyny, child beating and utter nonsense – all in the name of Islam. What tortures me is the fact that is this is a woman with a long career spanning more than 15 years in showbiz. She has worked as a fulltime professional media person in capacities including but not limited to producer, host, actor and model.

I would like to ask Nida if Maulana sahab will approve of her career as a media personality?

Apologies for saying this but I would also like to know if Yasir Nawaz is someday found having an extra-martial affair; should we all put the blame on Nida for “not doing enough”?

Would Nida tell us what methods she employs to beat up her lovely kids Silah and Farid?

Does Nida also like to be on the roads all the time to attract men, as Maulana sahab claimed on show and she apparently liked it with her giggles?

Would Nida respond by covering herself in head-to-toe black Niqaab and Burqah to ensure her daughter Silah does not disobey her, taking the advice of Maulana sahab?

Will Nida cancel her Valentines shows planned for the upcoming week now that she is a born-again Muslim thanks to Maulana Lays sahab? And what about those Wedding and Mehndi shows with latest bollywood dance moves? Will those be replaced by Maulana sahab’s Naats?

Dont teach your wives how to drive – Junaid Jamshed

Dr. Shazia Nawaz’s piece on this issue can be read here. She has also uploaded a video which I have reuploaded to DailyMotion to avoid the Halal ban on YouTube:

Junaid Jamshaid gave us a life changing advice. by alexpressed

While the statements made by Junaid Jamshed are so absurd that they do not deserve a reasoned response, I would like to recommend him to go see a psychiatrist. The memories of his dad beating him up to ensure proper growth and his insecurities about his young wife driving away from him (all in his own words) are haunting him now in his middle age. He needs a good psychiatrist to ensure a good life ahead.

But on the more serious side of the issue, such irresponsible programmes being on aired have a very high cost. Nida Yasir and ARY Digital might have been able to have raised their TRPs and viewership for a very short period of time but they are not realizing what the are promoting. This is very anti-thesis to the lifestyle Nida Yasir and people in ARY’s management most likely have subscribed to – the modern urban luxurious lifestyle. Giving free license on air to such dangerous mullahs to spill their hatred against women will come down to haunt these women who are promoting them now for money. In Junaid Jamshed’s Pakistan, instead of modelling, acting or hosting Valentines shows, Nida Yasir will be restricted to the boundaries of her house by Yasir Nawaz while he will have the luxury to have extra martial affairs while blaming Nida for “not doing enough.” Her kids will be regularly beaten up for proper upbringing and all women will be looked down upon as suspicious and “fitna“. Seriously Nida Yasir, is this what you want for yourself and other people of Pakistan?

WHAT TO DO ABOUT IT?

Please send your complaints or feedback about the programme, including a link to this blog, using following: