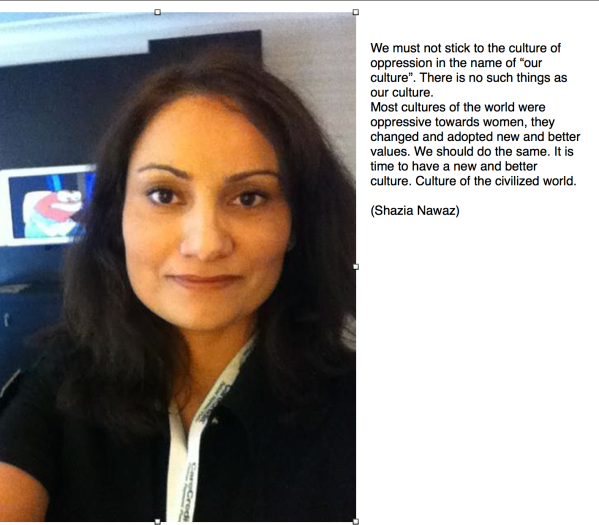 I did not find it inspiring and I did not find it offensive; I just found JJ’s interview very sad. How can an adult human have such an inability to think clearly?  And  JJ actually answered that question for us. It’s his friends. Somehow, he became a part of a crowd that does not allow him to think. They tell him things in the name of religion and he just follows, and uses his fame to “spread” that message.

Pakistan is not Saudi Arabia; Pakistan is a country where women get out of their houses and go to offices. Pakistan is a country where women drive. When JJ said on national Tv that he does not let his wife get out of the house and doesn’t let her drive because he doesn’t trust her due to his own insecurities, that gave us a look in to a very sick mind. Did he know that the woman sitting and interviewing him was also actually talking to a Na-Mehram?  And he was insulting that very woman with his statements?

I just feel sad for his wife who married a rock star and ended up spending her life with a very insecure and almost an ill man. JJ also admitted that he is Kam-Aqal, means stupid. And this is exactly what he is.  Then he looked in the eye of the Camera and advised rest of the Pakistani men-in a firm voice- to not let their wives drive or go out of their houses freely, so that they won’t be tempted.

And interestingly, when the interviewer asked questions about “those women fans”, he requested for privacy in that matter. Seems like JJ bhai has done Toba.

Idea of caging another human and controlling another human physically just so that human would not cheat on you is insane JJ bhai. But only if that insane idea worked, it would be worth it for some.  Just like men, women too only stay faithful if they are in happy marriages. If they love their husbands. If they are satisfied with their lives. Otherwise, just like men, they too find a way to look for happiness.

Watching JJ’s interview was nothing but very sad.  Also, in the civilized world, we don’t beat our children with hangers. It is not a “western idea” to not beat your children. It is just humane.  Children are physically weaker and can’t defend themselves, and beating them creates mental problems for them, and does not increase their IQ even one point.  Abused kids also become insecure and angry and they learn to lie. Probably JJ should see a psychologist to find a connection between his current insecurities and childhood beatings.