In the last few days Pakistan’s urban elites, many of whom remain aligned (due to sectarian, economic, political reasons) with the Saudi-sponsored Deobandi-Wahhabi hegemony in Pakistani establishment, have been a part of a sustained propaganda campaign against Dr. Tahir ul Qadri, the moderate Sunni Barelvi (Sufi) cleric who has challenged the pro-Taliban Deobandi-Wahhabi hegemony (the status quo) in Pakistan.

For details about why the guardians of the status quo, the urban elites and plutocrats of Pakistan, are upset with Dr. Qadri, refer to Ayaz Amir’s column: https://lubpak.com/archives/239295

According to media reports, Nawaz Sharif (the Saudi-sponsored pro-Taliban, pro-SipahSahaba, pro-Deobandi-Wahhabi politician, head of PML-N) has dedicated millions of rupees to spread false propaganda against Dr. Qadri. Such propaganda is not only being published by right wing newspapers and magazines (e.g., Nawaiwaqt, Jang, Zarbe Momin, Sipah Sahaba, Deobandi-Wahhabi websites etc) but also in English-language liberal-seeming media.

One English-language newspaper which is widely known to be under PML-N’s influence is the Express Tribune. Express Tribune’s owners remain aligned with Sharif brothers (Punjab government) of PML-N due to economic and political reasons.

Express Tribune is the same newspaper that published and then removed a news report about Nawaz Sharif’s PMLN’s alliance with Takfiri Deobandi terrorists of ASWJ-LeJ. https://lubpak.com/archives/229257

In the last two days, Express Tribune published two news reports comprising blatant lies about Dr. Qadri’s real name, asylum application to Canada, return flight and the date and grounds on which he was granted the nationality. At the same time, ET published a blatantly pro-army propaganda piece, an anti-politicians, anti-democracy column by the daughter of a serving military general without much concern and of course without making transparent her military family background and agenda. http://tribune.com.pk/story/495348/the-military-the-ppp-and-pakistan/

Such attitude by the ET speaks of its selective morality, double standards and unprofessional approach to journalism.

Canadian authorities on Friday summoned Minhajul Quran International (MQI) chief Dr Tahirul Qadri on February 5, and sought explanation from him for violating the oath he took while seeking asylum, Express News reported.
The authorities said that Qadri violated the oath stating that he was not allowed to enter the country he had sought asylum from.
According to Express News correspondent Shakeel Anjum, Abdul Shakoor Qadri, otherwise known as Tahir Qadri, had sought asylum from Canada in 2008, fearing threats to his life after he met with the Danish cartoonist responsible for making blasphemous caricatures of Prophet Muhammad (pbuh).
Qadri, through his lawyer Mendel Green, had requested that he was receiving death threats from Tehreek-e-Taliban Pakistan, Lashkar-e-Jhangvi (LeJ) and Sipah-e-Sahaba.
On October 17, 2009, his asylum application was accepted, while he was issued the Canadian passport about six months back.
The MQI chief has also been receiving welfare funds from the Canadian government, citing health issues.
Qadri, who led a 5-day long march in Islamabad which concluded Thursday evening, is currently present in Pakistan.
He is scheduled to fly back to Canada on January 27 along with his family.
Correction: An earlier version of this article had incorrectly stated Royal Canadian Monitoring Police instead of Royal Canadian Mounted Police. The error is regretted. http://tribune.com.pk/story/495741/qadri-summoned-by-royal-canadian-monitoring-police-for-violating-oath/ 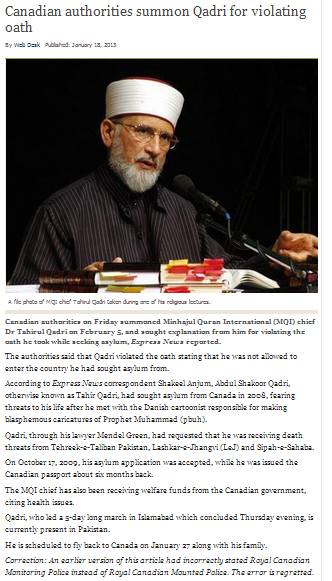 Minhajul Quran International (MQI) chief Dr Tahirul Qadri has decided to file an appeal in the Canadian federal court after Canadian authorities summoned him for violating his asylum oath, reported Express News on Saturday.
Qadri has hired four lawyers who will appear in the federal court on his behalf and will maintain that Qadri received complete security in Pakistan, said sources.
Meanwhile, Qadri’s lawyer Mendel Green who had requested for Qadri’s asylum in Canada refused to contest the summon order issued by authorities.
Canadian authorities had summoned Qadri on February 5, and sought explanation from him for violating the oath he took while seeking asylum.
The authorities said that Qadri violated the oath stating that he was not allowed to enter the country he had sought asylum from.
Qadri is scheduled to fly back to Canada on January 27 along with his family. http://tribune.com.pk/story/496174/oath-violation-qadri-to-file-appeal-in-canadian-federal-court/ 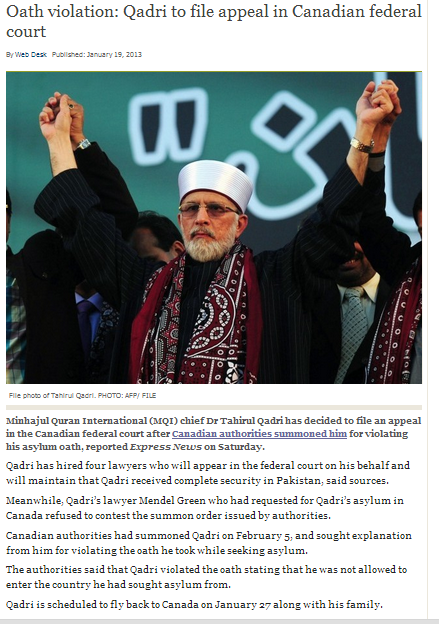 Here is Dr. Tahir ul Qadri’s response to rumours and lies spread via Express Tribune and subsequently picked up and further propagated by other right-wing (Lashkar-e-HamidMir) and pseudo-liberal elites (Lashkar-e-NajamSethi) in the media and believed by naive educated masses. As commented by a someone on facebook: “When some one lies left and right it’s hard to differentiate between right and wrong. Not every one has tendency to look matters in depth. Most people read headlines and believe it.”

The ET reports and subsequent propaganda has been rejected as false and malicious by Dr. Tahir ul Qadri and his education trust Minhaj ul Quran International MQI.

In a press conference on 19 January 2013, Dr. Qadri revealed that PML-N chief Nawaz Sharif and his brother Shahbaz Sharif, who had once “carried him on their shoulders” to show their love and respect for him, had now started the “worst propaganda” against him. Qadri, who heads the Tehrik Minhaj-ul-Quran, said the incident had occurred some years ago when the Sharif brothers were living in self-exile in Saudi Arabia. “Both brothers once carried me on their shoulders up to the Ghar-e-Hira (Holy Mountain) in Mecca just to express their love and devotion to my ideology. Now they have started the worst propaganda against me,” said Qadri, who led a four-day sit-in by tends of thousands of his supporters outside the Parliament here recently. The protest ended after Qadri and the government signed an agreement in which Qadri was acknowledged as a stakeholder in the setting up of a neutral interim government.

Qadri alleged in the news conference that the Sharif brothers had allocated Rs three billion from the PML-N government fund in Punjab to launch a “character assassination” campaign against him in the media. “Both brothers are notorious for this,” he added. Referring to his Canadian nationality and media reports about a summons issued to him by Canadian authorities for violating an oath made at the time of seeking asylum, Qadri said: “I got Canadian nationality after I resigned from (Pakistan’s) National Assembly in 2005.

“My name, as mentioned in my Pakistani and Canadian passports, is Tahir-ul-Qadri and not Abdul Shakoor Qadri. I had not sought refugee status in Canada on the pretext of receiving threats from the Lashkar-e-Jhangvi or Sipah-e-Sahaba Pakistan. I got the Canadian passport for being a religious leader in accordance with rules and regulations,” he stated. (Source: The Hindu; Economic Times)