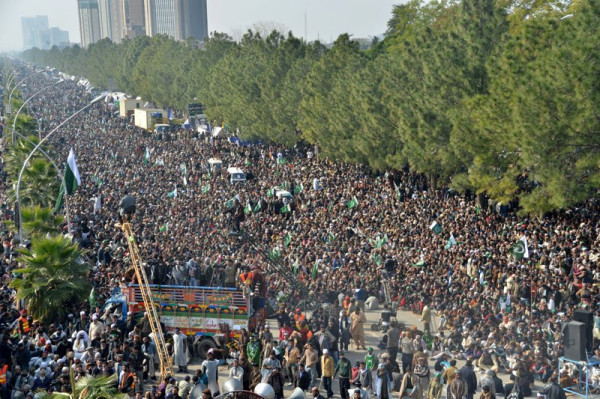 Over the past 5 days during the long march of Tahir-ul-Qadri or “Chabi wala baba” as his known amongst his critics, I have come across comments and analysis from many of my twitter and social network friends which forced me to pen this article.

I am surprised at myself that in one sense I am going to support a molvi, which is sort of unbelieveable thing for myself. Therefore I must remind myself that a molvi is a molvi whether he is chabi wala (Tahir-ul-Qadri) or Rangeela (Javed Ahmed Ghamdi) or even worse creatures like Moodoodi etc. A molvi is a creature who epitomises all the evil on the universe. Although following the laws of quantum mechanics as a part this universe a molvi can sometimes randomly do good things, however on a macro level a molvi is incapable of committing anything good.

After this reminder to myself, let me add a disclaimer for my readers, everything I write below is just to a logical reasoning to highlight some fallacies my social network friends have committed, in noway I feel compelled to support the clown that staged a the most comical and happy ending show in Islamabad in the past few days. So we here go:

There were two things that came out glaringly in the comments of many people against the chabi wala baba.

Even the misplaced comparison was in two categories, the first, which actually forced me to write this article, was the comparison with extremists (like lal masjid & taliban). One thing I learnt in Logic , is that you don’t compare apples with oranges, particularly when it could lead to disaster.  Not only that even in criminal procedure, there is a degree associated with every crime, a first degree murderer can not be equated with a shop lifter. Chabi wala baba is a molvi, telling lies is his profession but he has no comparison with the most heinous criminals i.e. taliban. We can not compare his dharna with lal masjid thugs forcefully closing a business (btw as told by Um Hassan, the Chinese brothel used to supply girls to Sheeda Tully, she did not mention which girls- probably the girls from Jamia-Hafsa – so in a way it was a business case). A good comparison of this dharna could be with the Lawyers movement long march dharna led by Aitzaz Ahsan. (It was so amusing to read the comments of Athar Minallah on Twitter when he was foaming against Chabi wala baba.), I must however say that I was fully supportive of Lawyers Movement Long March, in fact I started writing during that movement. And I don’t consider Chabi Wala Baba dharna as noble in cause as the former.

The misplaced comparison was not only comparing the peaceful march with the criminal blackmailing, it was also about how a group of people (read thugs) can attack Islamabad and black mail the sitting government, Esteemed analysts like Nusrat Javed were foaming in mouth how can we allow this. By the way I know the reason why Nusrat Javed was so intensely against Chabi wala baba. Once Chabi Wala Baba has sent his “goones” to protest against Bolta Pakistan. I know the act of Chabi wala baba is highly condemnable but again I always use the correct parameters for comparison, it is different to kill a journalist (as extremists keep doing all the time that is why NJ is always cautious and I agree with him), and sending a group of students to threaten a journalist. Both are crimes but one criminal is a killer and other is shop lifter.

2. Over Reaction
A lot of people on social network, were over reacting on the performance of Chabi Wala Baba (BTW Chabi Wala Baba till the end made it hard for these people to keep their over reaction focused on one thing). For example one of commentator Dr. Shazia Nawaz will be angry that how can the liar can keep telling the lies on the television. She would compare it with the guy who admitted raping a girl on the tv. I believe she was talking about his lie about “Blasphemy law” which the poor molvi has been taking pains to explain all around.

Another example of over reaction was about the “sympathy” for participants of the long march, one “ghaleez” molvi (I call him “ghaleez” because he carries the biggest gutter (tummy)  with him in all the molvis I have seen in Pakistan),  kept moaning about the people being hostage by “Chabi Wala Baba”, Mushtaq Minhas will be crying for the children and women bearing the winter of Islamabad. Well again I consider it over reaction (I agree that some well-meaning people may disagree with me on this count). It was wrong of “Chabi Wala Baba” to bring women & children on the venue, I have spoken to many of my friends in Islamabad, but they did not see any situation like people being hostage (my impression from talking to a lot of people in Islamabad was that people were having fun and a lot of people came on ideological ground). But the most important thing is that it did not last long and ended in a happy note.

3. Cursing the people of Pakistan
One thing that raised my blood pressure was from the guy “Mohsin Syed” , he was not the only one though. It was about cursing the people of Pakistan, I personally can not tolerate any one who curses and uses the bad words against the common men/women of Pakistan particularly the people of Pakistan who come from less developed areas and are not literate. Those “apparent” liberals who condemn people of Pakistan as “jahil” (جاھل) and an-parh (ان پڑھ), to me are the most disgusting and I always put them in the group of extremists. I firmly believe that every adult in Pakistan has fully grown up mind and is as equal as any one else to make the his choice for the future of Pakistan and his/her generations. Education does not at all give any edge to any human to consider himself better than the other un-educated person in exercising his/her right of adult franchise. I firmly believe that it is Taliban thinking that people are corrupt and “they deserve such leaders” and so on and so on. You can condemn one political leader or the other, you can ridicule Altaf Hussain, Zardari, Chabi Wala baba, Nawaz Sharif or any other political leader, but you can not condemn the people who “vote” for them. I know that many people will say that those “voters” are forced, well then liberate them not condemn.

Hence any one who actually foul mouthed about the people  participating in that Dharna, I blocked him/her immediately.

4. Happy Ending
I was rolling on floor laughing when the things ended so happily and the people against “Chabi Wala Baba” where unable to control their anger and cursing him for every possible reason without realising that how funny their remarks were. A lot of people were disappointed that why there was no showdown, how come “Chabi Wala Baba” is negotiating with a “Yazeedi Force” although likes of Nusrat Javed and Mushtaq Minhas were earlier so upset about “Chabi Wala Baba” calling the sitting government as “ex-government”. There were many who were upset why Dharna is ending so soon, why “Chabi Wala Baba” did not insist on his demands, although earlier they were screaming that “Chabi Wala Baba” is keeping people as hostage. Similarly a lot of people were disappointed that why people are leaving so peacefully, a lot of reporters wanted to find the people who are angry against “Chabi wala baba” .

It was indeed funniest part of the whole show.

Finally I must confess that for the five days I kept praying that no “explodable deobandi” explodes in the Dharna. That was keeping me sleepless. And I am glad that it all ended without any such thing. I will write some other day about how the “low IQ generals” of military of Pakistan used to be afraid of such Dharna’s in Islamabad, I had witnessed all three of the Dharna’s in 90’s. I am glad that during Zardari’s era, peaceful Dharnas in Islamabad are becoming a tradition. I hope that future governments also realize that allowing people to peacefully protest is not necessarily a danger to their rule.