Loose translation of Malik Ishaq Deobandi’s speech to Sipah Sahaba (ASWJ)’s public rally in Karachi on 11 January 2013 (a day after more than 85 Shia Muslims were slaughtered by Sipah Sahaba militants in Quetta):

“I am not a speaker, speech is not my speciality. You know what’s my speciality (reference to murder of more than 100 Shia Muslims and Sunni Barelvis by Malik Ishaq Deobandi). I have temporarily locked that department (i.e., a metaphorical reference to the department of murder of Shias by Lashkiar-e-Jhangvi) but the key to unlock that department is in my pocket. If I unlocked that department again (i.e. if I once again became an open leader of Lashkar-e-Jhangvi), that day will be the last day of Shias in Pakistan. I know exactly where do the cursed Shias live and sleep. The will find no refuge in any part of Pakistan. We will force them to run to Iran. We will enforce a law that no Single Shia will be allowed to be appointed on an important position in government. Now for entire three minutes chant the slogan Shias are Infidels (Kafir Kafir Shia Kafir)”

Abdul Nishapuri ‏@AbdulNishapuri
Someone should ask PPP & MQM thugs: Is it Shahbaz Sharif’s fault that Malik Ishaq Deobandi is addressing a rally in Karachi?

Marvi Sirmed ‏@marvisirmed
What? Malik Ishaq killer is addressing rally in Khi? Shame on you Sindh govt. What a shame for both PPP & MQM. nab him before he comes 4 you

syed jawad hamza ‏@syedjawadhamza
PPP’s Sindh gov allowed Bloody malik ishaq to attend jalsa at karachi.Wake up everybody those defend PPP for all the years #RIPKhudiali

mohammedhanif ‏@mohammedhanif
haven’t had the heart to turn on TV all day but if they are not showing the Quetta protests/funerals, we finally live in Jhangvi’s Pakistan 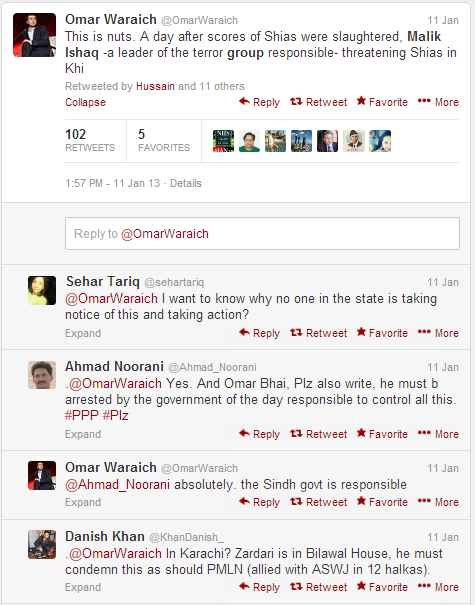 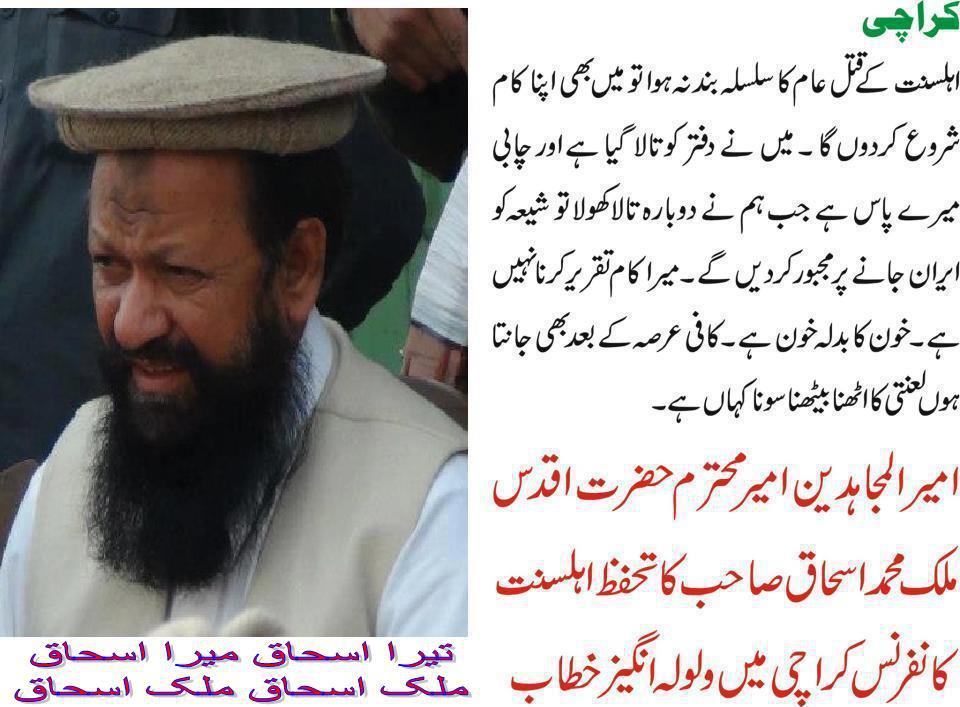 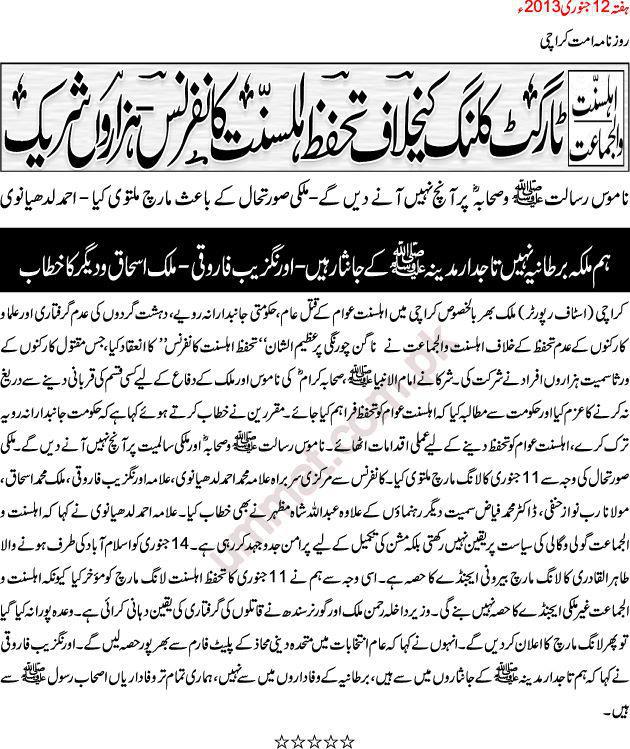 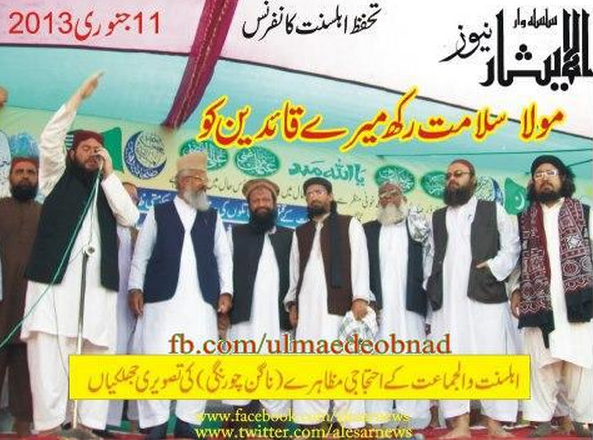 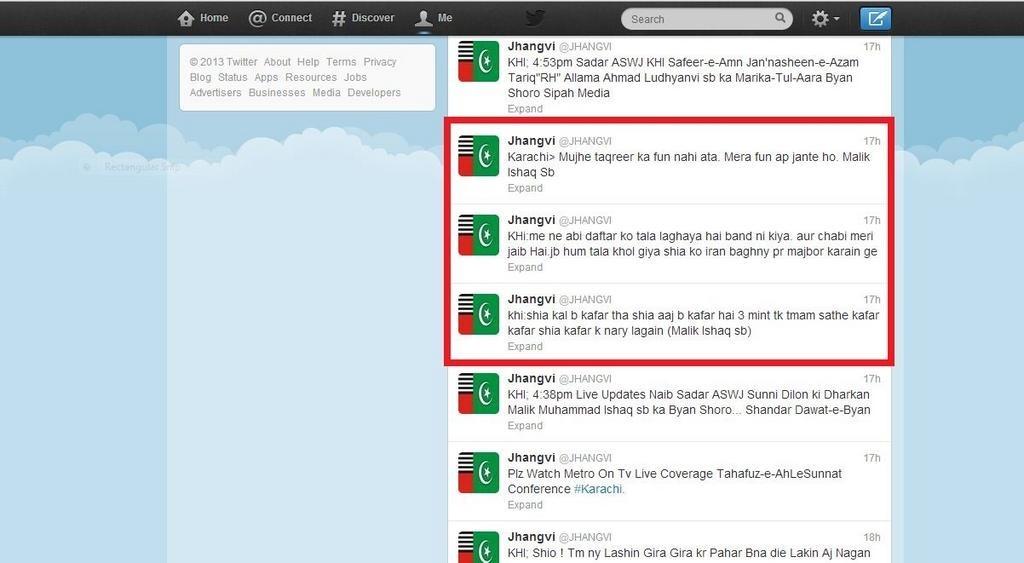 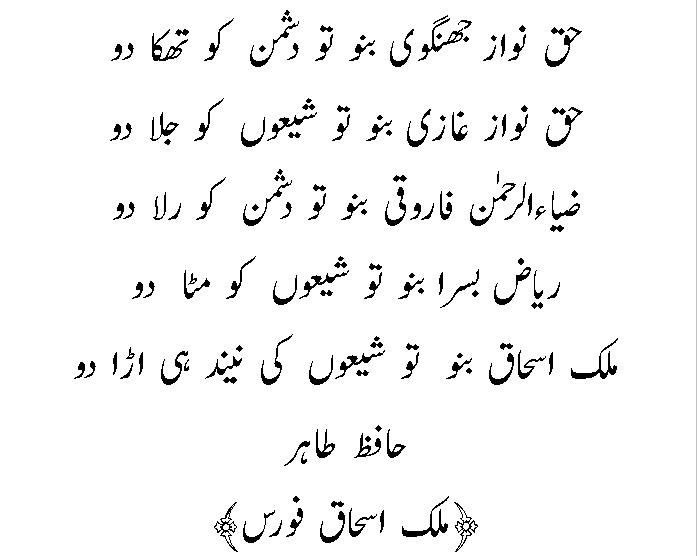