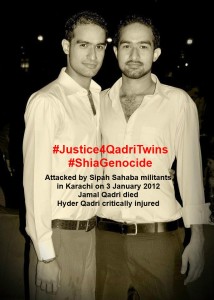 C1 :- Attack on twins [victims of #ShiaGenocide] reported in ET but without using word Shia or even Sectarian violence, Shame journalism!

http://tribune.com.pk/story/490193/murder-mystery-attack-on-twins-stumps-their-family/#comment-1223404
C2 :- C1, you’ve got to be kidding. You are seeking justice for two young Shia boys from Lyari. Come on, these folks from Lyari, Landhi, Orangi etc deserve only sympathy not justice. And if they are Shia, even sympathy is not in order. Shias matter as a count and not as names, let alone individuals. So this has been registered and will be accounted for among the number of Shias Pakistan is cleansed of during 2013. We all know the numbers for the previous years.

However comparing the murder of an Ahmedi or a Shia with any other murder in Pakistan does not make a plausible analogy. These Ahmedis and Shias are lesser humans, my dear.

(No witness, no complainant – so the case was closed; It was the blood of lowly folks, down the drain it flowed)

To be clear, I like all of you absolutely condemn the gruesome murder of Shahzeb Khan. But the reason his murder has led to such furore are simple:

1. Quite understandably in Shahzeb’s case the murder was of a young boy from the urban burgher elite. So, no wonder, the urban burghers, including some of us here, are standing for him. The so-called liberal upper middle class.
Were it a poor boy from Sind killed by the same feudal, no one would care.

2. The narrative of ‘Behan ki izzat’, resonating with all ghairatmand Pakistanis, was very helpful in spicing up and perhaps in getting attention from the Great Qazi of the Land, whose acts and justice always readily lend themselves to his ‘priorities’. Besides, he called young Shahzeb a ‘Gharib ka Bacha’. I wish he was better connected with the fabric of the society to know what Gharib ka Bacha connotes in Pakistan. (From eye witnesses’ account, ‘Behan ki izzat’ was not even the real reason, but that is beside the point for this discussion.)

3. This affords an opportunity to the urban elite –who despite their great ‘skills’ feel eclipsed by the feudals- to vent their anger and frustration against the feudals.

C3:-  Unlike Malala, Shahzeb was not an icon of any sort till a few days after his death … so singling this case out hundreds of similar murders every day and then making him out to be an angel are two points that many have not been able to digest. Suo moto only for Shahzeb? What about hundreds of others killed every day in personal feuds? What about Shia Muslims martyred only for being Shia?
Interesting that only “ghareeb ka bachcha” in this country is DSP’s son Shahzeb Khan … not thousands of poor killed every day around the country …. not Mehzar who is lying in a hospital, not the scores killed in Lolosar, Chilas and Mastung after being taken off buses and identified as Shia.

Long live such Justice! And long live the Chief Justice!

C4:- Shahzeb got the attention not because of the crime itself, but because of his political connection. DSP living in that posh area with more than one cars in the family also warrant thinking. The consolation is that Waderas are in trouble.

C3:- Shahzeb’s MNA uncle is practically a wadera ….; And we are buying the tickets sold by social and electronic media for this show refereed by Justice Ch, forgetting the Shia Genocide circus taking place all around us …