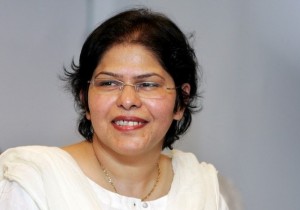 Note: The following piece is cross-posted from Express Tribune with some edits to take care of some minor omissions in the original piece.

A closer look at Tahirul Qadri’s thesis
– by Ayesha Siddiqa

Almost everyone seems to want a piece of Tahirul Qadri — [at least some pro-Deobandi-Salafist elements in the military] establishment to use him to derail the democratic process and most political parties that are partnering with him for a mix of political and strategic reasons. The [military] establishment-produced parties like the PML-Q want Qadri to fulfil the objective of countering the PML-N in Punjab. But then there are others like the MQM who want him for a host of reasons such as tapping into the imagined [or real] Sunni Barelvi support base of the MQM to gain advantage in elections but also to subvert the [Sipah Sahaba] Taliban influence, particularly in Karachi where it is a problem for the MQM.

Tahirul Qadri’s capacity is both imagined and [real]. The Sunni Barelvi vote [the largest sect in Pakistan with 50% Sunni Barelvi, 20% Deobandis, 20% Shias and 10% Ahle Hadith] has not always followed closed-group dynamics, which means that it not all Sunni Barelvis may support Qadri. Furthermore, its financial capacity is also exaggerated. This is borne by the fact that thus far, one of the biggest gripes of Sunni Barelvi mullahs was that their madrassas and mosques were being forcibly occupied by Deobandis (more than Ahle Hadith and Salafis) as they had greater money to spend. So far, Maulana Fazl Kareem, a Faisalabad-based Barelvi cleric, represented some form of consolidated Barelvi ideological interests but he could not make a huge dent because he never got truly handpicked by any external or internal establishment nor did he have the benefit of financial resources. Therefore, it is kind of sudden and strange to see Barelvis come into money.

Anyone asking for Qadri’s accountability is not wrong, though it is equally important to have accountability across the board. It makes for good advertisement when Qadri claims that he received funding from followers from around the world but that in itself means nothing. As for huge public support, [while agencies can easily put processions together, the Qadri show was much bigger than agencies capacity]:

According to Ayaz Amir, writing in The News:

Mockery on target can be devastating. Mockery out of place sounds hollow, rebounding on the perpetrator. It is easy to parody a self-styled Sheikh-ul-Islam in long dress and well-rounded cap. It is less easy to parody a disciplined gathering stretching from the Data Darbar to that side of the River Ravi. Armchair samurais may think mobilising a vast crowd like this is easy. It isn’t. And money alone, even tons of it, can’t ensure the desired outcome. People in the mass can be stupid, the collective wisdom of the masses a piece of fiction politicians and media gurus love to play with. But about one thing, and this is strange, people are not stupid. They walk to an event — could be any event, political gathering or pop concert — only when their hearts lead them.

Of course one event — as was proven by Imran Khan’s public show last year –does not a summer, or an upheaval, make. Bubbles form easily and as easily burst. How tall Imran Khan stood on the evening of Oct 30, 2011. Compared to those proportions he looks diminished today. Lasting power…without it politics, or indeed anything, is nothing.

So it is foolish to draw any final conclusions from Allama Professor Dr Tahirul Qadri’s massive public show — and for once the word massive is not out of place — on Dec 23. Will it lead to anything or was it just a freakish flash of lightning across the winter skies? The jury has to be out on this.

However, the Islam he preaches, this being not a small point, is of the kind with which most Pakistanis, and even westerners, can relate, above sectarianism and the right antidote to the stuff made famous by the Taliban. Ours is a stunted tree. No amount of water or fertiliser can make it straight. Preaching secularism, as I often do, won’t get anyone very far because on this soil this doctrine will never take root. Does anything sound gloomier than the echo of this word ‘never’? An incurable destiny, what can be gloomier than that? At any rate, only something like the moderate version of the faith that the professor preaches has any hope of succeeding. But I am running ahead. (Source:The News)

Referring to why different political parties are suddenly following Qadri, the MQM has other reasons as well such as neutralising the Deobandi militants i.e., Sipah Sahaba Taliban (SST) in urban Sindh. In Karachi, the party, for instance, has a severe problem of the growing influence of the Deobandi militants of the Sipah-e-Sahaba/the Lashkar-e-Jhangvi (LeJ) and the Jaish-e-Mohammad. According to a Police Special Branch report, some of the ‘under watch’ Deobandi seminaries are concentrated in Mohajir areas as well, such as Baldia, Nazimabad, Gulshan-e-Iqbal, Jamshed Town, Orangi, Gadap, and others. The Rohingya and Bengali populations in Mohajir-dominated areas are quite inclined towards jihadism and Deobandi ideology. This means that while the MQM may still hope for election victory, it is not as strong as it may hope to be when it comes to social and strategic-political issues. It has little influence on stopping the killing of Shias. The party can also not take the risk of taking on the Deobandi/Ahle-Hadith ideological groups head on. On the other hand, it hopes to minimise the ideological influence through partnering with Tahirul Qadri. The anti-corruption drive may be nothing else but a ploy to use politics to counter the popular jihad narrative.

This, however, raises an important question about whether Qadri can influence the jihadi discourse especially through his 600-page Fatwa on Terrorism and Suicide bombing. https://lubpak.com/archives/2334 Comprising 18 chapters, the fatwa tends to offer a new theory of rebellion and state response to this phenomenon in a Muslim state and society. Even though Tahirul Qadri stated in the Lahore jalsa that he would support people in their agitation against the drones, the fact is that he has condemned all terrorists to death in his fatwa. He considers modern-day terrorists as Kharijis, a group of people that, according to Qadri, existed since the time of the Holy Prophet (pbuh) and created fitna (chaos) in society and thus should be eliminated at all costs. There is no forgiveness for the Kharijis or modern-day terrorists in Qadri’s work, which may make his partnership with Imran Khan rather questionable as the PTI wants to talk to, not kill, the Taliban.

The legal-theological opinion by Qadri shows that there is a consensus in Islam on the Khariji which did not exist in Prophet Muhammad’s (pbuh) time but came about during the reign of the Fourth Caliph Hazrat Ali (RA) and challenged his authority. The fatwa indeed is historical and presents the opinion of many earlier jurists to establish its thesis regarding the legality of the use of force by non-state actors in an Islamic state. However, the author has used Ibn Taymiyyah, one of the most prominent Islamic scholars of the Hanbali school of thought (revered by most Deobandi and Salafist militants) who has driven the thinking of the Taliban, at least five times without any reference to the scholar’s core argument. Indeed, this is to create an impression of a consensus which is not the case. The problem with this approach is that a strong counterargument cannot be constructed without engaging with the argument first.

There is immense propaganda campaign against Tahirul Qadri not only due to sectarian reasons (by Deobandi and Salafist lobby) but also due to political reasons (e.g., by PML-N which previously used its influence on judiciary to malign Dr. Qadri). Dr. Qadri’s arguments are clearly not convincing hard core Takfiris or even Deobandis who are fed on an equally manipulative work by others such as Masood Azhar Deobandis’s three-volume justification of jihad, which, in turn, is styled on a research thesis of a modern Saudi Wahhabi scholar.

What Qadri Barelvi condemns as terrorism and Azhar Deobandi applauds as jihad is actually an undecided debate in Islam, between Sunni Sufis and Shias on side and Deobandi and Salafists on the other, on the legality of violence and rebellion. Historically, the entire debate revolves around efforts by jurists to make history and politics consistent with theology, thus creating a highly technical and symbolic discourse on the subject. The debate anchors on two particular verses from the Holy Quran on rebellion. The complexity arose because of the involvement of many of the Holy Prophet’s (pbuh) close associates in rebellion on its discourse – although they never indulged in violence against innocent civilians and government officials in their rebellion. Resorting to indiscriminate violence and breach of moral conduct has been a characteristic of Kharijis and Takfiris. Contrary to Ibn Taymiyyah’s support of rebellion against an illegitimate Islamic state, Qadri does not allow any form of rebellion to an extent. Considering the very thin line in the fatwa between licit and illicit rebellion, it is easy to understand that Qadri does not believe in violent rebellion against the political system. While one may disagree with Dr. Qadri’s political approach, a peaceful long march cannot be compared to violent insurrection against the State by Deobandi militants of Sipah Sahaba Taliban.