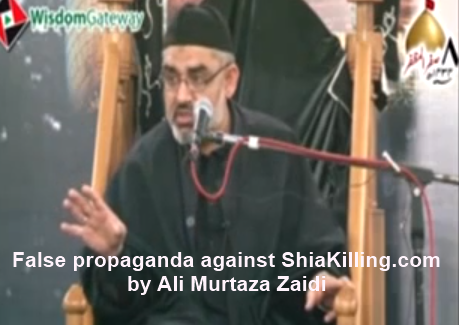 Pakistan’s military establishment and its media proxies have created a most disengenuous classification to protect their Taliban assets – a fake classification of “Good Taliban” for all those killers who they consider as assets.  This confusion is reinforced not just by the right-wing Urdu media press (Hamid Mir, Ansar Abbasi etc), the pseudo-liberals aka “Good Liberals” (Najam Sethi, Ejaz Haider, Ali Chishti etc) also create a similar confusion – albeit in a more sophisticated manner. After all, they have to continue milking foreign and donor funded NGOs on the pretence of being the last bastion of liberalism in Pakistan.

A similar category has emerged amongst the embattled Shia Muslim communities in Pakistan. It is the “Good” Shia Mullahs who thinks he knows what is best but whose analysis of the ongoing Shia Genocide in Pakistan is sometimes based on outright lies, conspiracy theories and xenophobia.  To be fair, not all Shia Mullahs or even all those Shia Mullahs who are part of the Iran-paid Majlis-e-Wahdade-Muslimeen (MWM of Raja Nasir Abbas etc) and Iran-paid Shia Ulma Council (SUC of Sajid Naqvi etc) are to blame. However, there are some clear instances of deliberately misleading statements by some of them that only harm the Shia communities of Pakistan.

This recent clip of Maulana Ali Murtaza Zaidi is most disappointing.  During his straw manning tirade,  he shifts the blame of Shia Genocide by Saudi-ISI backed Takfiri Deobandi terrorists of Sipah Sahaba (ASWJ-LeJ) onto an alleged vague nexus of India-Israel-America.  He then proceeds to berate the Shia Killing Media – the one group of young Shia activists that has kept this very issue alive for tens of thousands of Shias and which has taken great risks and even a temporary ban by Pakistan government/army to bring this issue to the fore. It is reassuring that campaign to highlight Shia genocide that was started by LUBP in June 2008 was ably carried forward by websites such as Pakistan Blogzine in 2010, World Shia Forum in 2012 and Shia Killing.com in 2011. In fact, LUBP and other activists are etc are indebted to Shia Killing Media for providing, free of cost, media materials that have highlight Shia Genocide to the rest of the World. By misrepresenting the work of Shia Killing Media, Ali Murtaza Zaidi was doing a great disservice to his audience.

Shia Killing Media (ShiaKilling.com) does not have any political bias and it is thanks to their tireless efforts that we can properly critique political parties and make the issue of Shia Genocide relevant. However, for some sellout, foreign-centric, hardline mullahs, Shia Killing’s honest and unbiased reporting has caused a major headache and Shia Killing have been labelled the “Bad” Shia activists in comparison to these sell-out, ISI-influenced “Good” Shia Mullahs.

The core reason for this is very simple.  Like LUBP, ShiaKilling.com believes in calling a spade a spade and has been open in its condemnation of the banned Takfiri Deobandi terrorists group (Sipah Sahaba Taliban) who proudly own up to Shia Genocide. They have not spared any political party or institute from criticism, which is consistent with the principled position of the LUBP and other young Shia activists.

On the other hand, “Good” Shia Mullahs who position themselves as the sole gate keepers of the faith, have even sat in coalition with known Shia killers and Shia haters in ISI-sponsored alliances such as MMA and DPC.  Can anyone of us forget Sajid Naqvi’s uncritical alliance with publicly declared Shia hater, Sami ul Haq! In the recent mob riots to protest the controversial dubbed youtube video, some Shia mullahs even joined hands with Sipah-e-Sahaba mobs to destroy property in Pakistan. On another occasion, when Taliban apologist General Hamid Gul was being duly taken to task by a Shia activist in pointed questioning, it was Shia Mullahs of MWM who were flanking to support him and prevent his complete exposure. It seems that for these “Good” Shia Mullahs, their hatred for India, Israel and America exceeds their regard for Shias – it also exceeds their hatred for those Takfiri Deobandi terrorists killing Shia on a daily basis!

These “Good” Shia Mullahs constantly harp on about the America-India-Israel axis and continue to deflect and obfuscate the role of the ISI-Saudi backed groups. We ask them if they are aware that some of the largest rallies protesting Shia Genocide took place in India and America!

While we disagree with elements of US foreign policy (especially in Syria and Bahrain), and we have written and published more posts on this topic than many Iran-centric Shia web sites, we must also acknowledge the positive contributions of our beloved team member, Rusty Walker, an American who has devoted several widely read articles on this topic and whose honesty and devotion to embattled Shias serves as an example.  Similarly, it is Americans like Prof. Christine Fair, Sadanath Dhume and Jonathan Landey who have spoken about Shia Genocide while our sellout pseudo- liberals continue to confuse and dilute this issue.

In principle, we at LUBP oppose the growing role of the Saudi-Ikhwan Lobby and hold this lobby directly responsible for the disastrous US foreign policy in Bahrain and Syria. However, the incoherent, anti-Semitic and conspiracy theory policy of the hardliners in Iran and their mullah proxies in Pakistan has only made things worse.  The world needs the US and Iran to make peace and for Iran to accept Israel and vice versa. Egypt, Jordan and Turkey have all accepted Israel while Iran continues its illogical romance with Hamas.  Hamas, Egypt, Jordan and Turkey meanwhile continue to promote anti-Shia sentiment in line with the Sheikhs of Qatar, KSA and UAE.

“Good” Shia Mullahs continue to mislead Shias on the central question of who is killing them.  However, the significance  for these brainwashed and politicized clerics is running out. We do not want to generalize on all of them as there are some who have also been killed. We realize that all of them are not sellouts or brainwashed  and that some of them have genuine security concerns. However, it is also clear that some of them are deliberately misguiding Shias.

Let us also remind our readers that when “Good/European” liberals like Ejaz Haider paint a target on all Shias by misrepresenting them as Iranian fifth columnists, it is these “Good” Shia Mullah, who are often anti Azadari, who oblige with their dishonesty and reinforce this stereotype.  Both these “Good Liberals” and Good” Shia Mullahs are Uncle Toms for the ISI and two sides of the same coin.

Fake progressives talk of everything under the same but can only spare crude Takfiri anti-Shia jokes when it comes to the topic of Shia Genocide.  Once again, it is these Uncle Tom “Good” Shia Mullahs who compliment the dishonest analogies of fake progressives by reinforcing stereotypes.  However, their hold on the community is loosening.

With their free of cost and tireless work for the Shia community, Shia Killing has shown the way forward. They have proved that the Azadars of Imam Hussain will always stand upto oppression. Even in the face of death, the Shias will not leave the Alam of Maula Abbas.  Azadari, the commemoration of Karbala, is the legacy of Bibi Zainab.  The Azadars of the Holy Prophet’s family do not need to guilt their fellow Muslims out of Zakat and Khums like the “Good” Shia Mullahs do.  We have our conscience to worry about while these Mullah are only concerned with the bottomline of their unethical accumulation of  Khums and Zakat monies. While we shed our blood in symbolic remembrance of Imam Hussain, these blood sucking Uncle Toms want to make their political career by bargaining our conscience and creating mass confusion on who is killing Shias.

However, with the emergence of ShiaKilling.com, they are not succeeding. The Shia street has been revived via various Azadari anjumans. These are the average Pakistanis, who unlike Pakistan’s sellout psuedo “Good” liberal elites, defy the Taliban on a daily basis.  They are all with Shia Killing and have had enough of sellout “Good” Mullahs.

Shias of Pakistan will no longer allow the Uncle Tom Mullahs and Uncle Tom Liberals of ISI to make their money on the victims of Shia Genocide.  In 1973, a few stray Shia mullahs supported the apostasization of our Ahmadi brothers and we all are paying the cost of this today.

Postscript: In contrast to Ali Murtaza Zaidi’s dubious, obufscating discourse on Shia genocide in Pakistan, watch this recent video by ShiaKilling.com which clearly describes and identifies the killers of Shia Muslims: