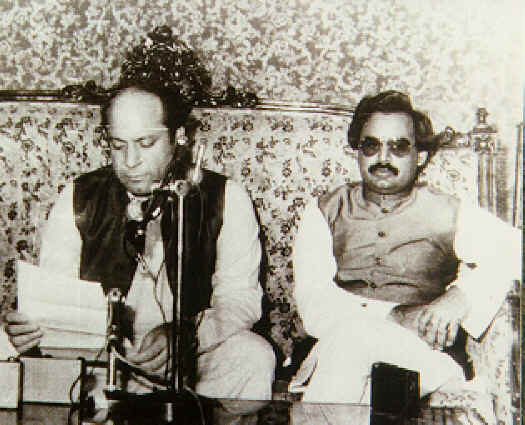 The Islami Jamhoori Ittehad [IJI] alliance was a conglomerate formed of nine mainly rightist parties by the ISI under Lt General Hameed Gul to ensure the defeat of Bhutto’s Pakistan People’s Party (PPP) in the polls.  DG ISI General Hameed Gul accepts that he made IJI.  Shaheed Mohtarma Benazir Bhutto had written in her book, “Daughter of the East”; how Osama Bin Laden paid a $1 Million to IJI during the election campaign to help Nawaz Sharif win the election during the late 80’s election campaign.

Nawaz Sharif had emerged as a political leader after formation of IJI- and subsequent gang up of all the right –wing parties under the banner of major opposition party in the national assembly, Pakistan Muslim League (Nawaz) against Pakistan People’s Party (PPP)’s federal government reminisces the repeat scene of those black days, when ISI had clandestinely doled out Mehran Bank’s fund to a set of journalists besides the rightist political outfits including molvies and maulanas for holding back PPP from the corridors of power.
Former Inter-Services Intelligence (ISI) chief Hamid Gul has clearly admits that he played a role in forming the Islami Jamhoori Ittehad (IJI) and any accountability of the issue should be started from him, a private TV channel quoted him as saying. Talking to the channel, Gul said former prime minister Nawaz Sharif was against any accountability, adding that the Saifur Rehman Accountability Cell was one sided. He said people had hoped that the then president Farooq Laghari would do justice through accountability, but he gave protection to journalists, generals and judges. Gul said when he would be probed about the IJI formation, he would reveal the names of those politicians who requested the military leadership not to hold elections
Mian Nawaz Sharif became Prime Minister for the first time after a nasty anti-Bhutto and anti-western campaign. Here is what the National Democratic Institute for International Affairs (NDI), which sent observers for that election, had to say about that campaign:

“Few substantive political, economic or social issues were debated during the campaign. Even the issuance of manifestos by the competing parties was a proforma affair. The campaign was quickly reduced to a single issue: whether the people supported or opposed the Bhutto family.
“The IJI attacked Benazir Bhutto’s record in office and emphasized the corruption of her ministers and of her husband, Asif Zardari. Members of the IJI criticized not only Bhutto’s abilities, but also her right, as a woman, to rule a Muslim state. The PDA appeared disorganized and portrayed itself as a victim of the ‘establishment.’ It felt harassed by the changes lodged against PDA leaders in the accountability tribunals.
“The most contentious element of the election campaign, and perhaps the most successful from an IJI perspective, was the IJI’s strategy of tying Benazir and Nasrat Bhutto to the United States and to the so-called “Indo-Zionist lobby” in the U.S. The lobby was portrayed as having close ties to India and Israel, and opposing Pakistan’s development of a nuclear capability. In particular, the Bhuttos were accused of “selling-out” Pakistan’s nuclear program. (See Appendix XII)
From the National Democratic Institute for International Affairs report titled “The October 1990 Elections in Pakistan: Report of the International Delegation”, on page 38.

MQM chief Altaf Hussain was the first to test these waters by articulating the suspicion of Pakistanis when he accused feudal landlords and said “A revolution is coming soon and it will be unstoppable,” . According to MQM chief Altaf Hussain martial law-like steps need to be taken to ‘save’ Pakistan. He has also called for accountability against corruption and feudalism-and than Chief Minister Punjab Shah-baz Sharif  second his views by saying that that a bloody revolution was approaching just around the corner. Amid talk of mid-term polls in the context of change, and in view of widening gulf between the PPP and the PML-N, a new political alliance is in the making. In a significant development, PML-Q, PML-F[pro establishment parties]merged under nomenclature of All Pakistan Muttahida Muslim League. This newly born alliance would soon turn out to be a “greater alliance” as more PML factions including some smaller political parties join it. A core committee has been constituted to contact leaguers in other factions of the league and some[Martial Law lover]politicians of national stature to shape up a greater alliance.
In the past, meeting between mian Nawaz Sharif and Chaudry Pervez Elahi was fixed by a common friend who had business interests with both Sharif(s) & Chaudry(s) in this regard. Chaudry Pervez Elahi & Nawaz Sharif discussed unification of PML-Q & PML-N but the negotiations came to a halt when Chaudry Pervez Elahi “demanded” a bigger chunk in the provincial government which was unacceptable to Nawaz Sharif; the meeting concluded with a follow up meeting; a promise to “tolerate each other” and presumably “to conduct joint Iftar parties in Liberty & Raiwind on alternate days” during the next Ramazan. There are still 80 cases pending again PML-N chief.
The ruling establishment has finalised a ‘comprehensive strategy’ viz-a-viz general election-and an ‘IJI-type’ alliance would be formed before the polls. The next local or general elections could see another religio-political alliance in the field as efforts are underway to bring PML and right wing  parties onto one political platform before the elections. The newly design All Pakistan Muslim League, other rightwing parties and Muttahida can form an alliance in the future.
Mian Nawaz Sharif and his party could also be part of this political alliance at a later stage, while it seems MNS is already preparing for the next elections sooner then later. PML-N’s central leader Siddiqul Farooq said one of the pre-requisite for PML-N’s joining the alliance of factions was that all factions should, after consensus with their central executive committees, unconditionally approve and accept the status of Nawaz Sharif as the supreme head of the newly-formed unity of factions. The PML boss[still living in 90’s] has conditioned revival of the alliance to mid term poll, he is not favouring in house change. But he kept assuring alliance members that he would join them.
The Ziaist style of PML-N politics plus undemocratic approach and conservative mindset of it’s chief boss continuously threatening democratic process. Nawaz Sharif once again exposed his desire to derail the democratic reform in Pakistan; previously he used to use Army to get to the power now totally relaying on judiciary, he is really trying hard to get “premiership” through undemocratic means.
The ever unpredictable nature of Pakistani Politics and recent Political of Change in National Assembly[campaign]-and possible Nawaz plus all Muslim League, MQM Alliance Against PPP? will inject an element of chaos & uncertainty into the already-fragile political system of the world’s most isolated country.