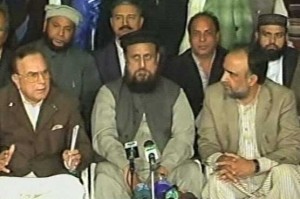 When election time nears, all things virtuous and principled seem to evaporate into thin air.  It is when it becomes more difficult to decipher the very creed the political party shows to adhere itself with, but with many wrongs and with many strategic alliances it makes for its own gains, it does not warrant any respect for that party  if it really has  to be seen critically and neutrally.  This has been the case with all political parties, that has worked their way  to pampering and wooing the public  by propelling their hard sentiments, and there is hardly any serious effort to be seen that can remove people’s misconceptions and misleading news reports that have moulded  their mindsets into puritanical orthodoxy, (commonly  known as “moderate” ).

Blood has been split. We can’t forget the reasons why Slaman Taseer and Shahbaz Bhatti were assassinated.   One  brutal  murderer has  already been praised and garlanded.  Why is there no condemnation over forming political  alliances with garlanding stalwarts of Mumtaz Qadri?

is there any justification for this?

In case, it has still not erased from the memory of my honorable LUBP members, why is there silence on this?

Is it not justified to label fellow bloggers not condemning this act to be Mumtaz Qadri supporters and sympathizers?