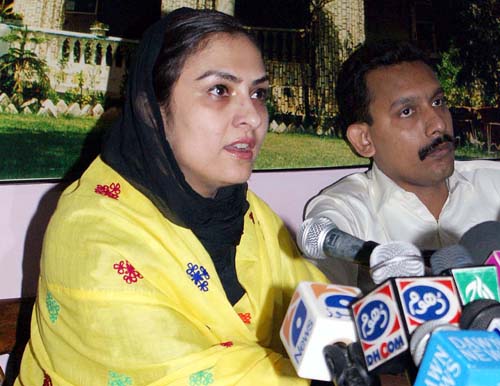 Racism is often talked about. Often condemned. Often deplored and largely abhored by any sane and educated person in today’s world. However there are still amongst us, a few, who thrive on hatred and racism. Surprisingly, these people are not only literate but have been educated at one of the best institutions in the world. They do not depict their racism or hatred explicitly but it is not difficult to comprehend their true feelings. One such person is our very own, Ms. Marvi Memon.

Ms. Memon, notorious for her political flings with different ideologies and political parties has lost many fans and admirers with her recent actions. She has often been seen with nationalists like Mumtaz Bhutto infamous for their anti Pakistan sentiments and ethnic riots in Sindh. While seeing this tilt in marvi’s politics, one is compelled to question her claims of changing Pakistan while she befriends people whose loyalty to pakistan is questionable to say the least.

Personally, the last nail in the coffen for me was Marvi’s book, titled “My Diaries”. On page 123 of the book, while talking about the Afghan refugees, Marvi writes and i quote, “The MQM eruption was significant how edgy/racist they are about migrants considering they themselves were migrants 60 years back”.

While few would disgree that those who migrated from India at the time of partition were indeed migrants, to compare them with the Afgahn refugees is either a result of shear naivity or extreme hatred. Those who migrated to Pakistan from India 60 years back were the ones who struggled for an independent home land, paved the way for the making of Pakistan, rendering over two million lives in the process. Their sacrifices were not limited to their lives, property or honour but included abandoning their cities, towns and even the graves of their ancestors for ever. I would like to mention, however, that when i refer to migrants, I include all migrants, irrespective of what language they spoke or what part of Pakistan they later settled in. Some notable migrants include, Quaid-e-Azam Mohommad Ali Jinnah, Liaqat Ali khan, Sadat Hassan Minto, Anwer Maqsood, Moin Akhtar, and also Marvi’s political mentor and God father, former President General Musharraf. Not only did those migrants do all within their means to make Iqbal’s dream a reality but continued to contribute to this nation’s prosperity in every possible way after its inception.

Now lets have a look at the role of our Afghan refugees. Neither did they struggle for Pakistan nor have they contributed to Pakitsan. They were mere refugees who were given shelter in our home land to protect them from the situation prevelant in their own country. The only area where there contribution has been significant is drug trade and weapons. The kind of culture that they have promoted is commonly known as the “klashinkove culture”.

I think to compare the sacrifices and struggle of our founding fathers with refugees of war is very impertinent and derogatory. It is time that our people identify these people and ostracize them to pave the way for a society that is free from hatred, intolerance and any ethnic riots. If we continue to put our trust in such leadership, it is only us who will be to blame for the divisions between us.