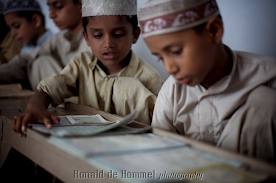 This morning after taking my breakfast I just opened a BBC Urdu site and  while holding a cup of tea in my hands I became so sad and couldn’t resist with some tears in my eyes. There was a news of a private school in Lahore whose infrastructure was hit and burned by a group of rigid and extremist Muslims and the school which was giving the teaching of new hopes now became a dark place with its demise. I saw the mourning pics of the school staff and the female students holding placards in their hands with this line in Urdu language,( AGAR TAUHEEN MAZHAB KISI MASJID MAIN HOTI TO KIA AAP US MASJID KO BHEE JALA DETE).

According to latest news the bail is rejected from the lower court but on discriminatory basis as they are unable to provide any proof of the charge and bail is rejected just to satisfy the false status quo in our country. I am of this firm believe that if you look at the near past stories its very easy to learn that in Pakistan the major discrimination, hatred and the division is made by these mosques and maddressahs. You will hear all the mongering and hatred speeches in Jummah’s sacred sermons by our religious scholars. So much so even in the month of Ramadan they will burst with their hatred towards the other sects with their so called Islamic beliefs. Recently in past we had been the witness of the Shi genocide and the attack on the mosques of our Ahmadis brothers by these draconian and rigid people.

The sect of Ahle Sunnat Wal Jammat compromising of (Deobandi sects with SSP and  LEJ and with Hafiz Saeed)they just teach you to hate with all other sects even with Barelvi and Ahle Sunnat sects.They don’t consider them as true Muslims and I always say that Deobandi sect is the Wahabism in Pakistan whose ultimately cause is to make this country a barbaric nation with their draconian thoughts and beliefs. What  a pity on us when Malala was targeted by this sect and when Late Governor the Martyr Mr.Salman Taseer was brutally murdered by a draconian mullah in uniform.

Now seeing all things its very much clear that the divisions is sharply made by our Deobandi sect with all his forms starting from their Evil Vatican Deoband in Karachi and spreading in all over Pakistan but all other sects are also equally responsible in this division.I think that our state should follow the Uzbekistan or Turkmenistan where religious education is banned till the age of 18 years and state should ban all these maddressahs as time has come to stand against this draconian evil force who is destroying us and our generations.

I firmly believe that we must act together to stop this draconian brutality or else stop saying that Islam is a religion of peace when its true followers are just spreading the brutality against the innocent people. All mosques and maddressahs should be either monitored or be banned.