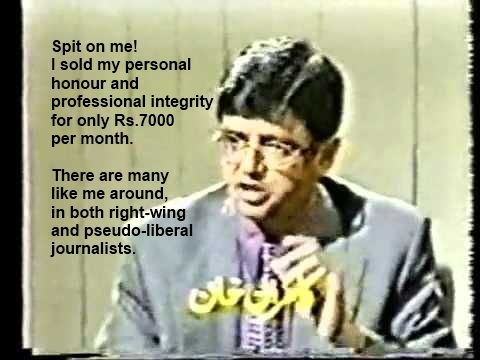 Brigadier Hamid disclosed this secret this in a Waqt TV program of “Apna Apna Gareban” by journalist Matiullah Jan.

“Anchor Kamran Khan was on payroll of Military Intelligence @ Rs 7000/month in 1991″ claims Ex MI Brig Hamid Saeed, in Apna Apna Gareban. Brigadier Hamid Saeed is important character of ISI-IJI funding case, who recently admitted before the Supreme Court that he personally distributed cash among politicians in 1990 election to prevent Benazir Bhutto from coming into power.”

While Pakistan Army chiefs routinely use ISI to buy politicians and journalists, General Aslam Beg used MI for this purpose because Benazir Bhutto had appointed an honest (retired) General Kallu as ISI’s head. Thus, seeing that door was closed, General Beg activated MI for political tasks. During that time, ISPR was being used to plant stories against Asif Zardari, e.g., Mr. 10 per cent story was released by Nusrat Javed and Kamran Khan – both of whom jointly gave Mr 10% title to Zardari.

Jang and Nawai waqt were, at least to some extent, reluctant to post false stories in order to safeguard their superficial credibility. So a system was devised where stories were printed in regional papers and Islamist periodicals (Takbeer, Zarb-e-Momin, Ummat, other Deobandi-Salafist magazines), and two major newspaper groups would then publish the stories quoting the paper.

Critical readers of Pakistani media are aware that a large number of right-wing and seemingly liberal (pseudo-liberal) journalists and anchors, most of them from Lahore, Karachi and Islamabad, are paid propagandists of Pakistan’s military establishment.

On Twitter, Kamran Khan released an unconvincing statement in an effort to prove his innocence. He wrote:

Kamran Khan ‏@AajKamranKhan
Without any desire to know why it took Mr. Hamid Saeed some 23 years to say something on me, this is rubbish…I’m honoured to inform AKKKS viewers that it was my no less than 20 stories in ‘The News’ that led to the exposure of Yunus Habib case. On the basis of my stories Air Marshal Ashgar Khan moved the Supreme Court and after 16 years earned a historic judgment for the nation.Obviously the culprits are fuming and may have thought of doing something nasty against me. Do remember that those stories of mine, till those days, were the only documented news stories that exposed. a filthy role of Pakistan’s military intelligence in manipulation of Pakistani politics with sound evidence. It’s all a matter of record not just hearsay! 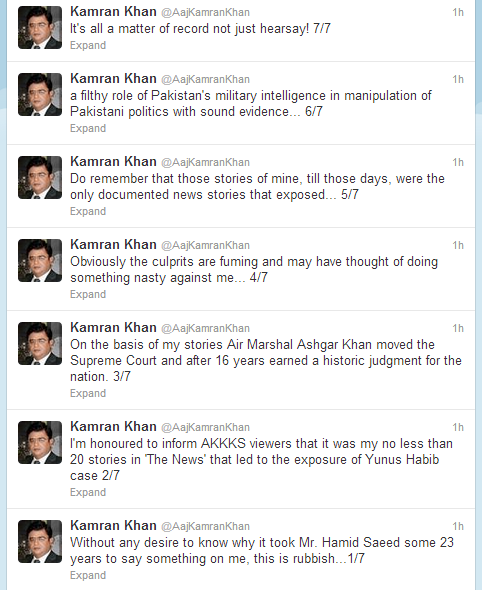 Luscious ‏@znt2002
So Kamran Khan is exposed. No surprise there. Down the years, we will also read about certain journalists being on #Taliban payroll too.

Yousuf Nazar ‏@YousufNazar
Deafening silence among journos over Brig. Hamid’s revelation Kamran Khan was on intelligence payroll. Which side they are on? Freedom? Nope. If Brig. Hamid’s statement is false, Kamran/others shud sue him in court & take lie detector tests.Time for empty denials is up