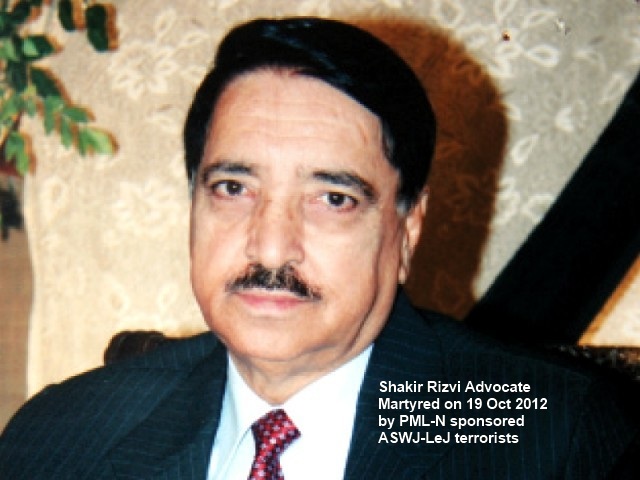 A few months ago, in January 2012, at least 34 Shia Muslims were killed in Khanpur (Rahimyar Khan).

In May this year, ASWJ Deobandi terrorists killed an eminent author and poet of the country Dr. Shabih-ul-Hasan in a similar assault in Lahore Cantonment area. The police have failed to nab the killers of Dr Hasan.

Dozens of Shia Muslims, moderate Sunni Barelvi Muslims, Ahmadis and Christians have been killed by ASWJ-LeJ terrorists supported by PML-N.

In the most recent incident, on 19 October 2012, armed motorcyclists (ASWJ-LeJ terrorists) killed a senior advocate near Jain Mandir crossing in broad daylight in what appeared to be yet another incident of Shia genocide here in the provincial metropolis early Friday.

Syed Shakir Ali Rizvi, 55, was on his way to Lahore High Court (LHC) on his daily routine when four unidentified gunmen riding two motorcycles intercepted his car at the crossing. Resident of Ghaziabad in Islampura area, Rizvi, was a recognised lawyer, leader of Shia Muslims, proponent of Shia-Sunni unity, and also an important social activist, his close friends stated.

The assailants pumped bullets into his body and fled away without facing any resistance. “The attackers did not open fire on the driver and the assistant of the lawyer. The modus operandi of the attackers suggests that it was targeted killing,” a police officer said.

A senior lawyer told reporters at the crime scene that Syed Shakir had been appearing in the courts in connection with several terrorism-related cases to help bring some terrorists to justice.

Sources further revealed that the attackers stopped the vehicle, carefully identified the lawyer, and then pumped four bullets into his body. Rizvi sustained one bullet in the chest and three in the belly and died on the spot. However, he was rushed to a hospital immediately, where doctors pronounced him dead. The assailants were chasing the lawyer since he left his residence on his car (LE-5914) alongwith an assistant and the driver to reach the court. There was no policeman on guard in the entire area, where they gunmen stopped the car and fled away after killing the lawyer.

The early morning attack created worst panic and fear in the entire locality and many people, who were either on their way to offices or to drop their children at schools, were seen racing towards safe places. The attack also created traffic mess at the busy crossing. Heavy police contingents including senior police officers and several lawyers from the courts reached the crime scene soon after the happening. The Old Anarkali police have registered the case against unidentified terrorists under Section (302 PPC and 7/ATA) on the complaint of Naeem Ali, nephew of the deceased man. The police are investigating with no arrest made so far.

Meanwhile, the funeral prayers of Rizvi was held on Friday evening amid tight security and he was buried at a local graveyard. A great number of religious leaders, lawyers, and political activists attended the funeral prayers. (Source: The Nation) 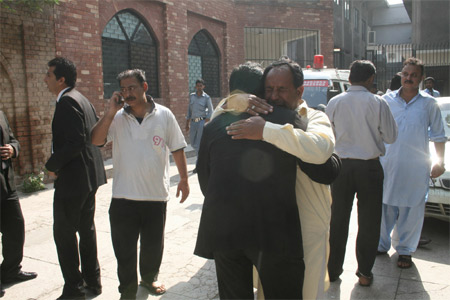 Family of the deceased said he had been receiving life threats for his role for the Shia community members and pursuing their cases. Late Riziv was also defending Ghulam Raza Naqvi, a leader of banned outfit Sipah-i-Muhammad, in different cases. Presently, Naqvi is behind the bars. Advocate Rizvi was survived by his wife, nine daughters and a son. His funeral will be held on Saturday (today).

The murder of Advocate Rizvi sparked anger among the legal fraternity as local lawyers abandoned their work and went on a strike immediately after the news of his killing spread. They boycotted court’s proceedings and strongly condemned the gruesome murder of a senior lawyer.

The Lahore High Court Bar Association convened an emergency meeting to lodge protest against the gory incident and demanded the government should ensure immediate arrest of Rizvi’s killers.

The bar also constituted a committee comprising its senior members to monitor the investigation and to cooperate with police in arresting the culprits. The bar appealed to religious scholars of all sects to play their role for curbing sectarian violence.

Lahore High Court Chief Justice Umar Ata Bandial also took a suo motu notice of the lawyer’s murder and directed the Punjab police inspector general to submit a report within 24 hours. The chief justice expressed anger over the law and order situation in the province and observed the murder was a result of serious negligence on part of the police department. (Source: Dawn) 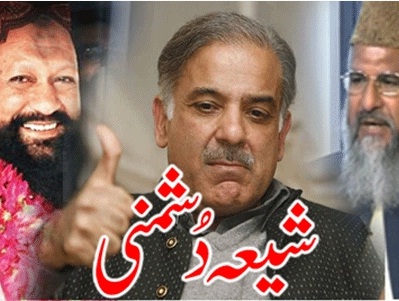