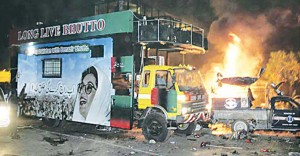 When she came, she saw and she wept with joy. When the state stood still, stunned and staggered before the Panorama of ‘Khalq e Khuda’. When streets of Karachi saw the zeal personified in ‘Ahl e Safa’ and ‘Mardood e Haram’ who had come out with hope in their eyes. When the fateful day started as ‘Eid’ and the night brought ‘Shaam e GhareebaN’ upon us. When the tyrants rose to retaliate while their elite offspring mocked and jeered a national heroine and democracy icon.

When exactly five years ago in the midnight of 18 and 19 October, 175 PPP workers, who had gathered to welcome and greet their leader Shaheed Mohtarma Benazir Bhutto, were killed by proxies of Pakistani state in twin bombings in Karachi.

Karsaz tragedy was nothing but the continuation of the state’s tradition of suppressing and in most gory aspects killing the voices that raised the flag of a progressive, democratic and a secular Pakistan. Myriads of ‘untouchables’ who had gathered to cheer the hope herself embodied in Mohtarma Benazir Bhutto were the ones who had actually posed the real threat to the state.  As always, the pro-democracy masses stood in stark contrast to upper middle class urban elites who masked their anti-democracy sentiments in their blind support  of corrupt, compromised, dictator-facilitating bureaucrats with a God complex!

The voice had been raised and the corridors of power were trembling with the echoes. The tricolor, dreaded by dictators, had come out in open to redeem the traditions of people of Pakistan. The flags of PPP were flying all over in Karachi. People from every nook and cranny had come in order to support the cause for which Benazir Bhutto had come back to her country i.e. to get her country free from extremism. The tyrants in higher echelon of the state could not brook the sight and proxies were dispatched to ruin the enthusiasm and rejoice of the people. Hundreds were martyred without knowing what supposedly their crime was. After that Benazir Bhutto escaped the attack in Karsaz, she came up with most defiant words ever spoken in political history of Pakistan.

In her book “Reconciliation: Islam, Democracy and the West” that published posthumously she wrote about Karsaz tragedy:

“I was informed of a meeting that had taken place in Lahore where the bomb blasts were planned… Three men belonging to a rival political faction were hired for half a million dollars…. However, a bomb maker was needed for the bombs. Enter Qari Saifullah Akhtar, a wanted terrorist who had tried to overthrow my second government. He had been extradited by the United Arab Emirates and was languishing in the Karachi central jail…. The officials in Lahore had turned to Akhtar for help. His liaison with elements in the government was a radical who was asked to make the bombs and he himself asked for a fatwa making it legitimate to oblige. He got one. The bomb blasts took place in the army cantonment area in Karachi.”

She was finally assassinated in Rawalpindi. Her people were targeted from Karachi to every corner of Pakistan. The workers of Pakistan Peoples Party have always remained in forefront when it comes to sacrificing lives for democracy in Pakistan. They are the ones who are real unsung heroes in this bloody feud of liberty against oppression and tyranny. They never get fame or get mentioned in headlines for that matter, but they are the very reason that Pakistan is on the road of democracy today. Salute to the martyrs of Karsaz !

In the desire for the flowers that were your lips

We were sacrificed on the dry branch of the scaffold

In the yearning for the light of your hands

We were killed in the darkening streets…

As the evening of tyranny dissolved in your memory

We walked on as far as our feet could carry us

A song on our lips, a lamp of sadness in our heart

Our grief bore witness to our love for your beauty

Look, we remained true to that love

We, who were executed in the dark lanes.