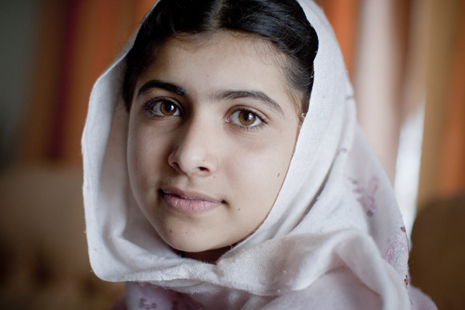 Some selected excerpts:
“Any military action in North Waziristan could only be taken, however, with corresponding anti-militant steps by United States and Afghan military across the border. So far, this has been a problem. Afghans officials have quietly admitted to me that Fazlullah’s actions are being backed by the Afghan intelligence services.”
“Afghan support for extremists like Fazlullah is, in a sense, return pay. Pakistan’s army has done exactly the same thing for the past twelve years—allowing Afghan Taliban to launch strikes into Afghanistan against United States and Afghan forces and then retreat back into Pakistan. Now both countries are more evenly balanced in this dangerous, brutal, bloody proxy war”

The shooting of Malala Yousafzai, a fourteen-year-old student, along with her two friends by Pakistani Taliban has created intense anger in Pakistan. Pakistanis have spent days in prayer for her life as she lay comatose in an army hospital in Rawalpindi and, Monday, was put on a plane to London, under tight security, for a brain operation (the Pakistani government will pay her expenses), and have held vigils and marches in support of her vision of education for all girls. But they are now also calling on the army to carry out its much delayed offensive in the tribal territories of North and South Waziristan to wipe out the ever growing networks of extremists, including Mullah Fazlullah, who is believed to be the mastermind of the attempted murder of Malala.

I live in Lahore and, like my neighbors, have spent this time watching the news and hoping that Malala survives. This is a simple human reaction, but one affected, too, by a sense of what she means for Pakistan. Malala may become a role model not just for girls in the region but also for peace. Her story now has the potential, if fully utilized, to bring about a serious geo-political change in the region that could actually help stabilize both Pakistan and Afghanistan.

For several years, the United States and NATO forces based in Afghanistan have demanded that the army carry out just such operations, but Pakistan has declined. After the shooting of Malala, there is unprecedented domestic pressure to finally do so. Pakistanis want to make it clear that they, the majority, do not support this brand of Islamic fundamentalism. If the army refuses to act now it may find itself ostracized by the very public whose support it seeks. On Monday, Interior Minister Rehman Malik was still insisting that there would be no operation in Waziristan—but the civilian government does not have the last word on any military operation.

Fazlullah’s forces were defeated by the Pakistani Army in 2009 after the public was incensed by a video showing Fazlullah’s gunmen flogging naked women. The army, also under enormous American pressure, moved some 2.5 million people out of the Swat Valley and sent in eighty thousand troops to clear Swat of militants—except that Fazlullah and his commanders escaped across the border into Kunar province, in northeastern Afghanistan. From Kunar, which is under the control of like-minded Al Qaeda affiliates, the Afghan Taliban, and multiple other groups from Central Asia, the Caucasus, China, and Europe, Fazlullah has recently relaunched his movement, attacking army posts inside Pakistan’s tribal belt and then retreating back to Kunar, where Pakistan cannot touch him.

Any military action in North Waziristan could only be taken, however, with corresponding anti-militant steps by United States and Afghan military across the border. So far, this has been a problem. Afghans officials have quietly admitted to me that Fazlullah’s actions are being backed by the Afghan intelligence services. (Officially, Afghanistan denies all such charges.)

Afghan support for extremists like Fazlullah is, in a sense, return pay. Pakistan’s army has done exactly the same thing for the past twelve years—allowing Afghan Taliban to launch strikes into Afghanistan against United States and Afghan forces and then retreat back into Pakistan. Now both countries are more evenly balanced in this dangerous, brutal, bloody proxy war—one that is leading to open war, with Pakistan’s army shelling Fazlullah’s camps and Afghan villages in Kunar almost every day, angering the Afghan public who demand that Karzai take action against Pakistan.

There are no American forces in Kunar to keep the peace, and very few Afghan forces. The United States has been silent on a flareup that could lead to “hot pursuit” incursions across the border and then a full scale war between the two neighbors. This could have devastating effect on the U.S. withdrawal from Afghanistan in 2014. To complete the circle, the American military’s silence is, in turn, due to its unanswered demands that Pakistan attack North and South Waziristan and rein in the Afghan Taliban, especially the Jalaluddin Haqqani network, and cease destabilizing Afghanistan.

The big change is that the public mood in Pakistan at present is playing directly to a moderate view of Islam, tolerance, democracy, and good neighborliness—or it would, if only there were a serious leader in the country who could take advantage of it. But the country lacks effective leadership.

The mullahs, who have refused to name the Taliban as the culprits in the shooting of Malala—even though the Taliban has claimed responsibility—speculating that the shooters were working for the Americans, the Indians, or even for the army, are becoming marginalized for the first time in more than a decade. Other right-wingers who have suggested that Malala deserved to be attacked for supporting Western democracy have been ridiculed.

Political leaders on the right, like Imran Khan—who has been sympathetic to the Taliban and has sought the advice of retired intelligence agents, reactionary mullahs, and others of the extreme right—have also been sidelined by Malala’s shooting. Khan has said that the Taliban are fighting a jihad in Afghanistan against an American occupation. His campaign to highlight the American policy of sending drones into Pakistan has fizzled at a time when more and more people regard the Taliban as the real threat. So, even as the army is under extreme public pressure to show its teeth and move into Waziristan, its core constituencies of right-wing politicians and mullahs have been weakened.

But the army will not and cannot attempt to clear out the Taliban as long as the Afghans continue giving sanctuary to Fazlullah. The fear is that any Pakistani offensive in the tribal badlands will lead to the bulk of the Pakistani extremists just fleeing across the border into Kunar and neighboring Nuristan. The Americans, busy with elections and withdrawal plans, are in winding-up mode, not in offensive mode. And so Afghans would have to be the ones to act.

If the Afghans would be willing to throw out Fazlullah and his men, then the Pakistan Army could embrace the previously unthinkable. Pakistan could prevent the Afghan Taliban from crossing the border, push them to negotiate a powersharing deal with Karzai—and then ask them to go back home. The next American President, whoever it is, should support such a settlement, rather than fighting to the last day of 2014.

Since 9/11 the Pakistani military has failed to adopt a comprehensive strategy toward terrorism and extremism. Is this the moment for one to develop? For years, critics like me have been voices in the wilderness trying to point out that the military needs to change its narrative and stop backing extremists in the name of countering India if it is to allow Pakistan to develop as a modern state. Now could be that moment—one provided, tragically, by the shooting of a fourteen-year-old girl who is now fighting for her life. It won’t last forever.

FOOD FOR THOUGHT:
What the article does not discuss how far the actions of the Afghan intelligence are backed or sponsored by the Americans. They have been mostly in charge of Afghan security for the last decade.

As ISAF withdraws from Afghanistan, we need an integrated political, military, and intelligence strategy. Standard narratives and cliches, staple of Pakistani media and analysts, won’t do. Most don’t even touch the surface of the complexity of the challenges we face. To start with, those who are condemning Malala’s shooting (and very rightly so) don’t seem to have an answer what exactly should be the response of Pakistani government.? President and Army Chief, two individuals who matter the most, have not given any concrete indication. They didn’t even condemn the TTP by name.

Retaliation against Fazlullah group might involve a commando operation in Fazaluulah’s bases in Afghanistan. Should we do that? That’s one sure way to hurt the capability of TTP to spread terror in Pakistan. If not, why not, and what are the other options besides statements of condemnation.