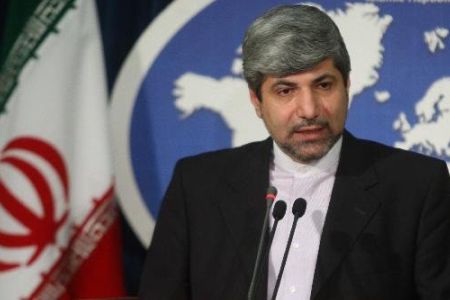 Attack on Iranian diplomat is an attack not only on Iran but also on American values and international obligations.

The unfortunate attack on senior Iranian diplomat Ramin Mehmanparast in New York has all the hallmarks of Saudi Salafist lobby trying to ignite yet another counter-productive war in the Middle East, by luring the USA to attack Iran and Syria.

As a matter of principle, we remain critical of the theocratic regime in Tehran. As a secular blog, we believe in separation of State and religion and have in the past condemned Iranian clerical regime’s excesses against its political opponents, women and minority groups. However, that does not mean we are oblivious to the growing influence of the Saudi Salafist lobby in Washington DC and other Western capitals, which has resulted in unholy sponsoring of Takfiri Salafist militants in Libya, Syria, Bahrain, Eastern Saudi Arabia and South Asia. In Pakistan alone, we have lost 19,000 Shias, hundreds of Sunni Sufis, Ahmadis, Christians etc at the hands of Saudi-funded Salafist-Deobandis.

Ramin Mehmanparast was escorted from a Manhattan street by police after he was surrounded and threatened and attacked by violent protesters outside the UN building.

An honourable American woman showed true American values (concern for peace, civility, human rights) when she screamed for the safety of the Iranian diplomate:”Drive away””Oh my god what is he doin?” 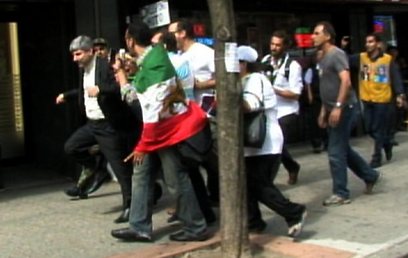 Saudi-funded Salafists can’t be allowed to attack diplomats in the streets of New York to implement their global Jihadist agenda.

We are sure that honorable, peace loving American citizens will not allow their country to be taken over by greedy Oil corporations and the Petro-Dollar rich Saudi Lobby. We can’t ignore the fact that Western Oil companies were the only victorious party in the aftermath of the US attacks on Libya and Iraq whereas the Al-Qaeda flag flew in both countries. We are also aware that Salafists are currently sponsored by Saudi Arabia and Qatar in Syria just as they were sponsored in Afghanistan and Libya. In Syria, it’s also Al-Qaeda doing all those terror attacks and again Saudi Arabia is backing them up. Thanks to the Saudi Lobby, the MEK terrorists have been recently taken off the official USA list of terrorist organizations.

As a standing protocol, NYPD is ordered to arrest anyone who tries to attack Presidents﻿ or diplomats; in this case they were very slow to act. THE NYPD stood strong and let the Salafist thugs attack the Iranian diplomate for a full 4:40 seconds. That is not acceptable.

The message sent from the street of New York to other cities of the world does not add to the USA’s honour and image as a responsible and law abiding country. If American government too allows attacks on foreign diplomats, then they don’t present themselves much different from the Islamist goons who attacked the US embassy in Tehran in 1979. US government must take all necessary precautions to protect diplomats from Salafist thugs and their paid proxies of Iranian, Libyan and Syrian origin.

In a text message, Alireza Miryusefi, a spokesman for Iran’s UN Mission, blamed the aggression of the protesters towards Mr Mehmanparast on the MEK. The “MEK is going to be delisted and you can expect such a aggressive behaviour of a terrorist sect. It would be another wrong step by US administration. The responsibility of protecting all diplomats is on behalf of government of USA”, Mr Miryusefi said.

Perhaps it is high time that the Obama Administration reviews its decision to delist MEK from list of terrorist organizations and also reviews its increasing reliance on discourses and agendas of the Saudi Lobby.