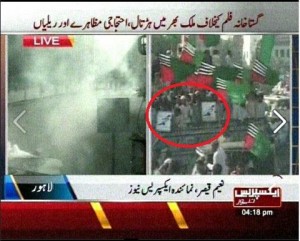 In protesting against a controversial and hateful youtube, the Islamists validated all the negative anti-Muslim stereotyples and then some more.

As shocking images of the police battling these Islamofascist thugs is relayed all over the world, Pakistan’s Pro Taliban media is doing its best to misrepresent the situation.  Inspite of pleas from the government, the media is blaming the Government and the police instead of the violent mobs that have killed 4-5 policemen in the last couple of hours.  It is also helping the various Islamist groups (JI, JuD, ASWJ and PTI) in coordinating their violence against the State.

While the current PPP government wants to use the United Nations forum to address this issue, Islamist parties, generally allied with the Taliban and Al Qaeda, are using the situation to terrorise the public and cause maximum damage.

What is lost in this madness is that hate cannot be countered with more hate, violence and destruction.

Nothing would be more disrespectful to the Holy Prophet than the misuse of his memory to justify arson, destruction and murder.  The makers of the ridiculous insensitive video have succeeded in their provocation – their hate counterparts, the Islamists, have ensured this success.

In the smoke and rubble, muslims worldwide need to engage in serious introspection.  They need to understand that the Salafi-Takfiri misrepresentation of the Holy Prophet needs to be challenged at the intellectual level.  Muslims also need to realize that the disrespectful and caricaturized versions of the Holy Prophet have their biggest support in extremist narrative.  Muslims need to study and understand that this selective narrative is often based on their own secondary and tertiary sources.  Moreover, violent acts by extremist muslims reinforce negatives stereotypes.

Pakistan’s corporate media is typically deflecting attention away from its  Islamist allies(JI, ASWJ, JuD, PTI) whose activists and supporters wrecked mayhem in Karachi, Lahore, Islamabad and Peshawar.  They are blaming the PPP-lead government for not leading these rallies.   While the Government certainly bears responsibility for its failure to curb this violence, the major responsibility, as dictated by common sense, lies with the perpetrators.  If today had not been declared a national holiday imagine how much greater the casualties would have been given.  Imagine what these hooligans would have done to schools and commercial offices.   From Zaffar Abbas (brother of ISPR General Athar Abbas) to Ansar Abbasi to anti-Ahmadi bigot Aamir Liaquat, the media kept chiming the same script:

“The Government should have lead these mobs!”

One can be critical of the PPP on many fronts but surely, choosing the UN forum as opposed to an extremist mob is the right correct decision.

“Today in Islamabad protest Imran Khan appeared near enclave. Asked protestors to march towards US emb. Said I am in front. Then disappeared ! via Taha Siddiqui
@TahaSSiddiqui (Twitter)” 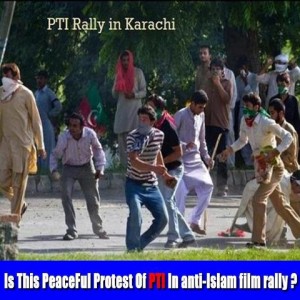 Will the Supreme Court take Suo Moto notice of the vandalism and violence done by its allies like PTI, ASWJ and JI?

Given their current record of releasing terrorists, the answer is fairly obvious.