Shias of Pakistan are suffering genocide in the co 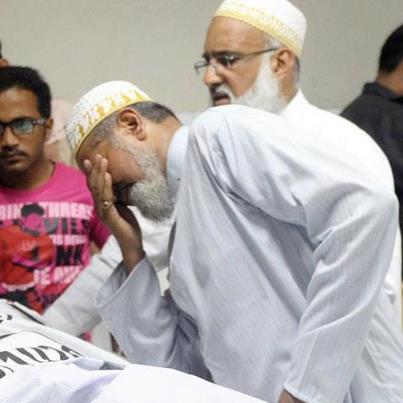 untry they played a vital role in creating. Thousands of Shias have been killed by the state-sponsored jihadi outfits in the last 3 decades but their plight has been considered unimportant to be cared for by the State,  civil society and the intelligentsia. The right-wing nuts as well as the so-called liberals, both of whom have had their different shares in the public sphere have unfortunately either ignored the killings of Shias, obfuscated the issue, or even worse, justified it. But the recent bombing of Hyderi market, a center of the Bohra Shia community in Karachi, has left all these people bereft of any further justifications.

Previously, the, ironically similar, justifications/misrepresentations proffered by both right-wing nuts and fake liberals have been:

To the right-wing nuts I have nothing to say.  I would have surely despised them if I had given them a second thought, but I do want to address those who stand (or think that they stand) on the other parts of the political spectrum.

None of the above-mentioned justifications hold water anyway and have been disproved on several occasions at different fora. But except a few honorable exceptions even celebrated liberals and human rights champions of Pakistan, and the kings and queens (and jokers) of the Kingdom of Social Media and journalism are not ready to embrace the obvious, which is:

Shias, irrespective of cast, ethnicity, area and profession are being killed in large numbers, which should now be termed, categorically and unequivocally, as genocide.

Even if Shia Genocide was  evident, it was previously ignored, obfuscated or justified by fake liberals. But this heinous act against the peace-loving, business-oriented Shia Bohra community leaves them with no more justifications, because:

While even the Twelver Shias cannot be blamed for most of what Bohras have been absolved of, but the latter were previously somewhat lucky, and at times even presented to other Shias as example. We have heard that Bohras are not attacked because they are apolitical, do not do tabbarra, and aren’t an Iranian proxy.

But now the Bohras too have been attacked. And this leaves our liberal friends with few options left at their disposal to continue misrepresenting Shia Genocide.

They should either prove that Lashkar-e-Jhangvi was not involved in targeting Shia-Bohras (as some did), or admit, as much as they don’t want to, and say, as much as they can’t, that Shias (along with moderate Sunnis, Sufis, Ahmedis, Christians and Hindus) are being killed by Takfiri Deobandis who do not need to have reasons beyond their identity to kill Shias. Shias are being killed by the state-sponsored jihadis because they are Shias. Period.