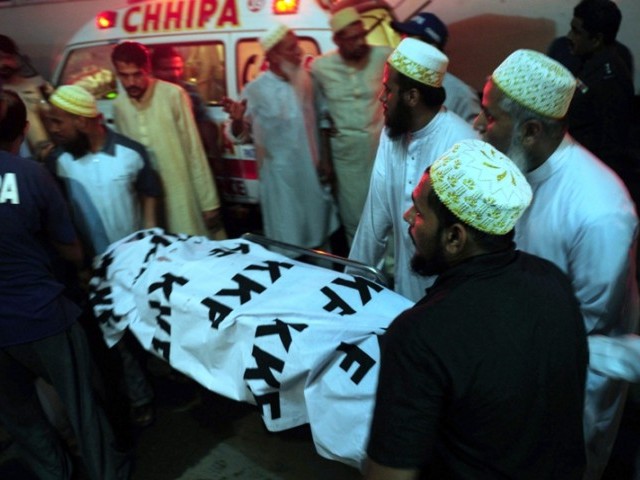 On Tuesday (18 Sep 2012), Takfiri Deobandi militants of Sipah-e-Sahaba (currently operating as Ahle Sunnat Wal Jamaat ASWJ) set their eyes on a new target: Karachi’s Shia Bohra community. Amid the evening hustle and bustle, Tuesday saw two bomb explosions, both at the same spot, in a Shia Bohra area (Hyderi) in North Nazimabad, Karachi. The bomb was planted just a few hundred metres from the area’s Bohri Jamaat Khaana and many were returning from prayers at the time of the first blast. So far, six of the seven dead in both blasts belong to the Bohra community.

The twin blasts were, perhaps, the first targeted attack against the community (a sub-sect of Shia Islam) and came just one day after the visit to Karachi of Syedi Mufaddal Bhaisaheb Saifuddin, the designated successor to the office of Da’i al-Mutlaq of the Dawoodi Bohras. The Bohra community was abuzz with activity and excitement over the visit and a large number of the community’s members from across the country and India were visiting Karachi for the occasion.

The dead included a three-month-old baby, a 12-year-old girl and a woman, 22 others injured.

On the same day when Shia Bohras were slaughtered in Karachi, in Balochistan’s Mastung district — the same area where pilgrims were pulled out of a bus and killed last year — a car bomb targeted a bus carrying Shia pilgrims returning from Iran. At least seven were reported dead in the Mastung attack by ASWJ-LeJ militants.

In the Karachi killing, the Takfiri perpetrators targeted, perhaps for the first time, the Bohras, a peaceful, industrious, mercantile community. The perpetrators knew what they were doing: the site of the blasts is close to the city’s main Bohra mosque, while community members usually gather in the bustling commercial-cum-residential area after evening prayers, which is when the bombings occurred. The blasts came only a day after Mufaddal Bhaisaheb, son and designated successor of the current Bohra leader, was in the metropolis. Last month, a bomb had been discovered and defused in the same spot. The bombings add a new dimension to the bloodshed, pulling the apolitical Bohra community into the vortex of violence.

“Six of the dead belong to the Dawoodi Bohra community, while the seventh is an ice cream vendor belonging to Rahimyar Khan,” a doctor at the Abbasi Shaheed Hospital said. Almost all the victims had suffered pellet injuries.

Nooruddin, 45; Fukhurdin, 55; Umema, 12; an unknown woman; Ismail who died during treatment; ice cream vendor Sajid and three-month-old Shabbir, son of Asghar Ali, were killed. The baby’s body was taken away by his family from the hospital without allowing legal formalities, sources said.

The explosions took place on a road between two apartment buildings — Qasr-i-Kutbuddin and Burhani Bagh — in Block C of North Nazimabad, commonly called Bohra Compound. Pellet marks were left on the walls of both the buildings.

“At the time, many people, especially youngsters, were on the street buying eatables from stalls,” Mustafa Hussain, a witness, said. The compound has around 600 apartments.

“I helped pick up four injured people and put them in ambulances,” said Shabbir Husain, who was wearing a bloodstained shirt.

Indeed, is the Shia Bohra community – numbering half a million – going to become the next big target of Takfiri Deobandi terrorists and, if yes, do the powers that be even care? The second half of the question is easy to answer. The extent to which Shia Muslims of all ethnic backgrounds are facing a gradual genocide in al areas of Pakistan, and the extent to which government, army and judiciary have shown insensitivity to routine massacres of innocent Shiites, the fate of Shia Bohra community does not seem to be much different from other Shias. This then defies the terrorist apologist argument that violence against Shia by Takfiri Deobandis is a tit for tat affair. Of course, Shia Bohras are neither Iranian in their origin nor in ideology. Nor are they involved in any political or religious activity which might offend mainstream Sunni population. The only crime of Bohra community is their faith; they are a sub-sect of Shia Islam.

As Shi’as, Bohras believe that their Imāms are descendants of the prophet Muhammad by way of his daughter Fatima and her husband Ali. They believe that Muhammad chose Ali as his successor while he was returning from his first and last Haj in 632 CE. Dawoodi Bohra as Shi’a believe that after Muhammad, Ali had been the rightful wasi, Imam and caliph, but the actual zahiri (“literalist”) caliphate was usurped by other successors, whom the Sunnis accept. The first through the fifth Imam, who was Ja’far al-Sadiq, are commonly accepted by all the Shi’a. Bohras count Hasan as the first Imam, whereas Nizari Ismailis and Twelvers number Ali as the first. The followers of Ja’far’s son, Isma’il ibn Jafar, became Ismailis, from whom the Bohra descend. Dawoodi Bohras believe Walayah to be the most important of the seven pillars of Islam. It is the love and devotion for Allah, through their Dai, Imam, Wasi (Wali) Ali and Nabi Muhammad. (Source)

Violence against Shias of Pakistan is enabled by Army and its intelligence agencies which remain reluctant to arrest and punish Takfiri Deobandi militants which they intend to use for proxy Jihad in Afghanistan and Kashmir. The police remain crippled by reprisal attacks by ASWJ-LeJ terrorists, honest judges are being killed while right-wing judges continue to release Malik Ishaq and other Takfiri Deobandis, ruling PPP government remains least bothered about Shia genocide, and even senior security officials privately admit they are in no position to fully enforce the law because of Pakistan Army’s support to Jihadi Deobandis. So what should one expect?

Instead of making half-hearted claims about investigating the attacks, the state needs to crush Lashkar-i-Jhangvi, as the outfit is fast becoming the primary source of terrorism in this country. By not taking decisive steps to curb militancy so far, the security establishment has only facilitated the killers. Until the extremists’ infrastructure is dismantled and their operatives and planners tried and punished, there is little chance of the bloodshed abating.

Initial investigations of Tuesday’s Hyderi Market blast revealed that Lashkar-e-Jhangvi’s Shuja Haider group was involved in the attack. Around five to eight kilograms of explosive material was used, Federal Investigation Agency’s (FIA) special unit claimed. “The explosive material contained around 500-800 ball bearing,” the FIA unit added.
Police claimed that LeJ’s members Mohammad Shaqib Farooqi, Murtaza alias Shakil, Arab Miskeen, Murad Shah and several others were involved in Tuesday’s twin blasts. Police also detained two brothers of one of the suspects involved in the blast. The suspected LeJ members were also involved in three blasts in 2009 – one in Orangi town on Muharram 8 and another at Paposh Nagar, Chandni Chowk, on Muharram 9 and the third at Light House on Muharram 10. Suspects were arrested from Maripur Road in 2010 but they escaped from the city courts when their accomplices attacked the police with hand grenades. “Ball bearings have been used before in similar explosions by the sectarian terrorists,” said CID SP Investigation Mazhar Mashwani. “So there is a possibility that Lashkar-e-Jhangvi (LeJ) might be involved.” SP Mashwani recalled similar explosive devices planted on motorbikes in the past. “There was one attack in Malir 15, at Nursery Bridge, JPMC and in front of the Darul Sehat hospital,” he said. “They used ball bearings and nut bolts in all of those attacks.” While police is still investigating the case, some officers also suspected involvement of the banned separatist group – the Baloch Liberation Army (BLA). On August 13, the eve of Pakistan’s Independence Day celebrations, police was tipped off about presence of a bomb in the same market. It was defused and SP Mashwani had then pointed at BLA. “In January, we had picked up some men belonging to BLA as suspects involved in attack on Rangers. The way the improvised bomb was made and used was the same as found in the market. It was also the same on August 14 eve, and there was every reason to suspect that the organisation might be behind it.” But the sectarian outfits are bent on spreading terror and the Bohra community, who are basically Shia, can be a target, he said. “Bohras are rice traders and businessmen. It was probably meant to create more sectarian tensions.” Senior police official Aslam Khan said investigators suspected the Bohra community was the target of the blasts, which could be heard several kilometres away, as they own many of the shops and houses in the area. “They are peaceful community that live in tens of thousands in Karachi and mainly do business. We are investigating why they have been targeted,” he said. A police investigator speaking anonymously said officers foiled an attempted bombing in Hyderi Market just weeks earlier. “Just a month ago, we recovered a powerful bomb in the same area,” he said. “They are peaceful people and we are seriously investigating sectarian reasons behind the explosion.” “The community is reasonably afraid because of the attack, but we are intensifying security in the area.” Many of Pakistan’s Bohras are traders, and around half live in Karachi, running food, grocery and clothing businesses. “We are very peaceful people, such attacks have highly shaken our confidence. We are in a state of shock and the government will have to do a lot to restore our confidence,” Naveed Lotia, 42, a cloth merchant in Hyderi said.