The World Economic Forum has released its annual Global Competitiveness Report 2012-2013 which assesses the business environment in individual countries and domestic conditions that improve or impede it.

“The Global Competitiveness Report 2012-2013 assesses the competitiveness landscape of 144 economies, providing insight into the drivers of their productivity and prosperity. The Report series remains the most comprehensive assessment of national competitiveness worldwide.”

Although Pakistan’s GC ranking went up five places to 118 (out of 142 world economies) in 2011, the year 2012 saw a deeper drop in the country’s position as it slumped to 124th place, its lowest ranking in the last three years .

The WEF did, however, give a resounding ‘thumbs up’ to the PPP-led coalition government in certain areas. 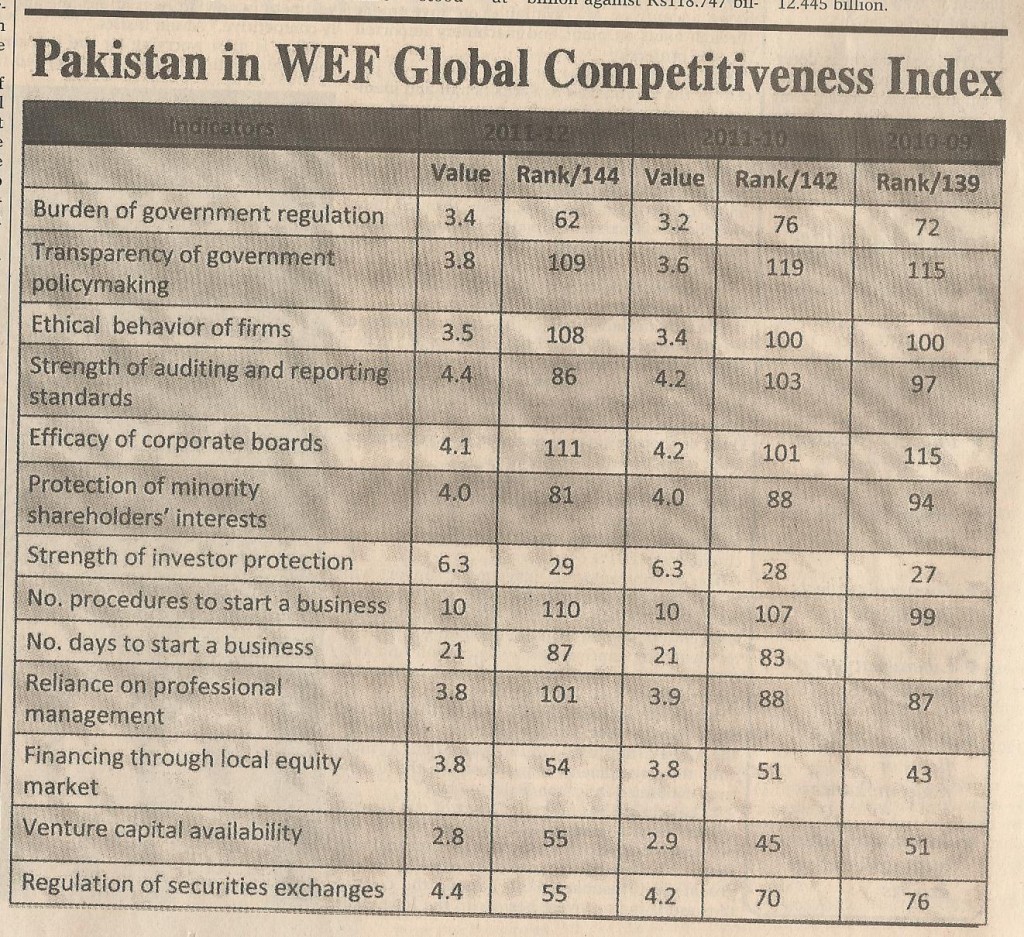 The government’s efforts to reduce red tape in the performance of business activity have been recognised by the WEF which ranked Pakistan at 62nd out of 144 world economies. A whopping rise of 12 places over its 2011 ranking of 76!

Transparency of policy development was another area where the government was appreciatively judged. Pakistan saw a rise of 10 places to 109 in its current year ranking.

Regulation of security exchanges improved in the period 2011-2012. The rise in Pakistan’s ranking in this area was the highest by far. It appreciated by 15 places to 55th rank this year. Coincidentally or otherwise, 2012 was also the year in which the Karachi Stock Exchange was de-mutualised and converted into a public limited company in a landmark re-structuring of the exchange.

Other areas in which Pakistan was highly ranked include:

A cursory glance at the statistics compiled in the GCR clearly show Pakistan has been ranked low in far more areas than where it has been ranked high. Many of the readers of this post will want to draw attention to that. Solely to those aspects of this report in fact. The purpose of this post, as with this blog, is to fight the negativist and hateful propaganda of right wing and fake liberal critics of this PPP-led coalition government that seek to draw a bleak picture of the Pakistani economy. The areas where the WEF recognised improvements in Pakistan’s economy are few. But they are more than enough to appreciate the work done by this Peoples government in some very trying financial difficulties.