The Baloch National Council for Human Rights (BNCHR) has released a report titled “Sorry Saga of Baloch Miseries” highlighting Baloch Genocide. Previous reports by HRW, HRCP etc have documented that hundreds of Balochs have been killed by Pakistan Army and hundreds more abducted by its various agencies in the last few years.

Shia Muslims are Pakistan’s most target killed and suffered community, with more than 19,000 dead and an equal number permanently maimed or injured. At least 1000 Shias including Hazaras, Balochs, Pashtuns, Punjabis etc have been killed in Balochistan in the last few years.

Consistent with our principled stance on human rights, we completely sympathize with our Baloch brothers and sisters, and their sufferings at the hands of Pakistani Army and State.

However, it was distasteful to see the misrepresentation of Shia genocide in the said report. The following are some observations:

1. The BNCHR Report remains selective on issues of human rights. With documented cases of approximately 1000 Shias, both Shia Hazaras and non-Hazara Shias, killed in the last few years, Shia Muslims remain the largest target killed community in Balochistan. However, unfortunately the sufferings of Shias of Balochistan have been grossly ignored in the Baloch human rights report. Are Baloch, Hazara, Pashtun Shias not a part of Balochistan? Do their issues of human rights not deserve mention and sympathy?

2. The country-wide and province-wide Shia genocide has been misrepresented as a Hazara ethnicity specific issue. At least 200 non-Hazara Shias killed in Balochistan have been wiped out form the report.

3. False neutrality has been shown between the ISI-sponsored Takfiri terrorists (LeJ-ASWJ-SSP) and the Shia community. A phantom organization, Sipah-e-Muhammad, which was annihiliated by the ISI in late 1990s has been shown as equally active and equally vile as SSP-LeJ, and is said to be operating under the leadership of PPP’s senator Faisal Raza Abidi, under ISI’s patronage. First, no such organization exists today. Second, Senator Abidi has nothing to do with violence against any community. Third, reprisal attacks by a few Shia youths against combatant criminals of LeJ-ASWJ cannot be equated with LeJ-ASWJ’s systematic attacks on ALL Shias. Fourth, ISI is a sponsor of Shia massacres, not the other way round.

4. While the Baloch human rights report duly mentions Punjabi roots and leadership of the Lashkar-e-Jhangvi (aka ASWJ) and its patronage by the ISI, it completely wipes out (barring a mention of Mullah Farooq) the fact that a large section of LeJ-ASWJ in Balochistan comprises Baloch recruits, particularly those of Brahvi-Baloch backgrounds. It also completely sets aside evidence of increasing links and functional cooperation between Baloch nationalists and LeJ-ASWJ militants. Latest in this regard is the death of Sanaullah Siddiqi Baloch in Khuzdar who was a joint office bearer and activist of the Baloch Republican Party of Bramdagh Bugti and ASWJ of Maulana Ludhianvi.

5. The report wrongly describes LeJ-ASWJ as a Sunni organization instead of discarding and describing it as a Takfiri Deobandi group.

6. Of course, the report makes no mention of at least 800 Punjabi settlers including Shia settlers killed by Baloch nationalists.

Here are some excerpts from the report.

Sipah-e-Muhammad
A Shia militant group, active in southern Punjab and Karachi mostly. Formed by Maulana Mureed Abbas Yazdani in 1990, to counter the attacks of Sipah-e-Sahaba than, now known as Laskhar-e-Jhangavi. Though the group is believed to be funded by Iranian extremist regime but ISI uses them time and again the sympathies of Saudia specially. It is widely believed that the ruling PPP Senator, Mr. Faisal Raza Abidi is running the racket from Karachi. In Balochistan ISI uses the group to eliminate Sunni Muslim scholars of Baloch Nation. By this ISI is trying to achieve two main objectives , one is to get rid of Baloch Scholars and the other is to blend Baloch National struggle of freedom as a sectarian issue. He is known for his stance against Supreme Court. 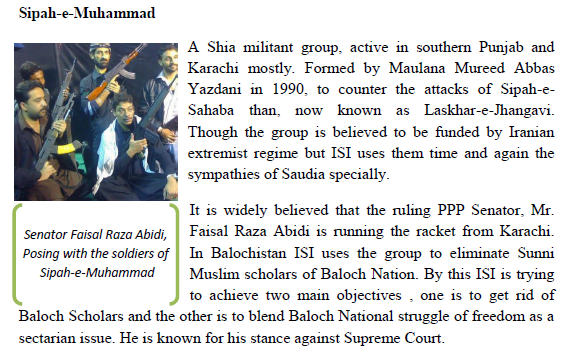 State sponsored private militias:
Once ISI took the matters in hand, they established various State sponsored private militias to eliminate Baloch. Criminal elements of the society are gathered, trained and financed to carry out the fascist agenda of the corrupt state. To compensate these militias financially, they are given free hand for the illicit trade of drugs and arms. These militias also kidnap the citizens for huge amounts of ransom. They can operate with impunity till they are working for the oppressor, and ready to eliminate the given targets. Peace force, Tehrek-e-Nifaz-e-aman, Musalah Difai Tanzeem, and Mutahida Mahaz are the state sponsored terrorist outfits. While on sectarian grounds, Laskar-e-Jhangavi and Sipah-e-Muhammad are funded to carry out the massacre.

Lashkar-e-Jhangavi
Laskar-e-Jhangavi with extremist ideologies is a sister concern of Taliban. Though their official secerteriate is in the Jhang city of Punjab, but in Balochistan they are operating from Quetta. Head of the gang is
Molana Ishaq, a close ally of Mian Nawaz Shareef the ex-Prime minister of Pakistan. He has been arrested from Lahore after his reported differences with Mian Brothers of Punjab. Their provincial chief is known as Mullah Farooq, who lives with the Chief Minister of Balochistan. They claim the killings of Hazara community in
Balochistan specifically. Hazara community is Shia Muslim by religious beliefs while Lashkare-Jhangavi is known as Sunni extremist outfit. Killings of Hazara community escalated in recent years and termed as genocide literally. After failing to pursue the Hazara community against Baloch Nation, ISI started to target them. ISI also accuse the Hazaras of being trained from Iran against Sunni extremist army of Pakistan. They consider them a potential threat for the State. Lashkar-e-Jhangavi targets the liberal section of Baloch nation on allegation of infidelity. They are even dangerous because of their suicidal squad. This organization is sponsored by the Punjabi extremists, and mainstream political parties of Punjab. Extremist faction of Pakistani military also helps them generously, while they are considered as strategic assets of ISI. In result of expected evacuation of NATO and America from Afghanistan, Lashkar-e-Jhangavi will play a great role in favor of Pakistan. 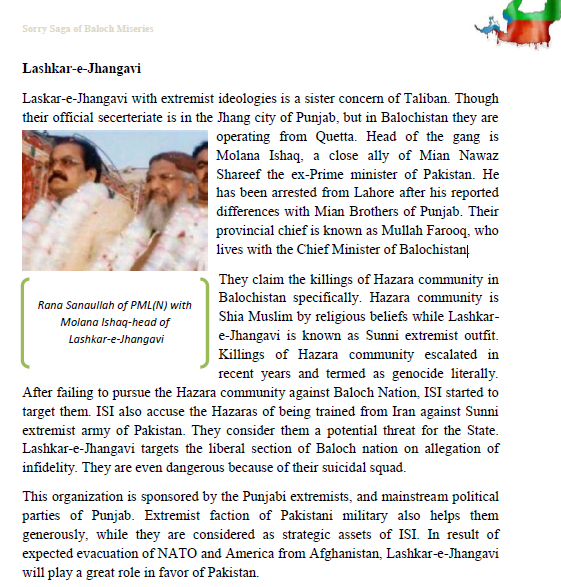