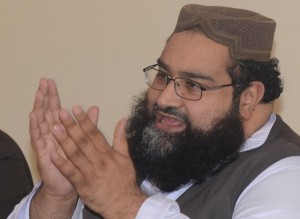 I recently happened to read a really heartwarming piece written by Hafiz Maulana Tahir Ashrafi which was published in the opinion pages of one of Express Tribune, a popular English daily of Pakistan. In the midst of all the negativity that surrounds the social divide between lift and right wings, which is inflicting cracks in the structure of Pakistani society, the piece seemed like a breath of fresh air. The good Maulana emphasized on rights of minorities, discouraging the misuse of the law for personnel vendetta and above all, practicing ‘restraint’.

The ‘restraint’ part is most compelling because if what have been seen from the many debates that have occurred in TV shows, ‘restraint’ is something hardly seen among our good old politicians and religious clergy. Our very own good Maulana included among them. If one reads the piece before watching the following video, it comes as a jolt that both the piece written and the following speech made is by the same person:
(Caution: Explicit language used in the video)

I hope many readers remember who late Shahbaz Bhatti was right? You know, the poor guy whom we made our Federal Minister for Minorities Affairs as a token gesture to show that we do care about a thing called ‘minority’. The one who dared to speak against Pakistan made blasphemy laws alongside late Salman Taseer and stood firm on it even after the latter’s assassination? Yes, that same poor creature.

In the video, Hafiz sahib is seen (apart from using vulgar language and testing the pitch of his throat) issuing threats to late Shahbaz Bhatti; of mutilation of his body parts including eyes, tongue and arms.

Wait, what was about that ‘restraint’ thing again? O yes, in words of Maulana sahib himself:

“The Holy Quran prescribes restraint and distancing from blasphemous persons or situations. The emphasis is on restraint.”

Not once but twice the emphasis is on (as he very kindly reminds us) ‘restraint’. The only crime of late Shahbaz Bhatti was about the misuse of the law, the same law about which Maulana sahib has also very rightly referred to. To this day, I have not seen any evidence whether Mr. Bhatti actually made any blasphemous remarks. All he did was the same thing which Mr. Ashrafi has been saying on different talk shows and recent article. So what to make of it?

Is it the case of simple hypocrisy which plagues not just our religious clergy but society in general? If my memory serves me correctly Mr. Ashrafi even had spoken in defense of late Salmaan Taseer with strong words. Why so harsh in case of Shahbaz Bhatti? Could it be because he was a Christian?

This is not the only time Hafiz sahib has shown his biases towards a certain side. Consider the following case:

According to Maulana’s hate speech (can’t think of any other word), some supposedly obscene books are responsible for all the deaths of innocent passengers in Gilgit, vegetable seller Shia Hazaras in Quetta and common white collar workers in Karachi? Not just that he uses national TV as a platform to go on and launch further sectarian hatred when he accuses Khomeini of instigating attack on Kaaba. There are so many things wrong about this statement. First of all what does Ayatullah Khomeini have to do with innocent Shia killings in Pakistan? Secondly, no Iranian or Shia ever attacked Kaaba. Only time Kaaba was ever under an actual siege was done by group of Takfiri Salafist tola which find excuses for every one to be declared Kafir or Wajib ul Qatl. Or is it just the case of Maulana sahib’s being in the elite’s good books on rare occasions of compassion? It is plausible. After all, he works as a host with Business Plus as well; a channel owned by Taseer family. If it so than I am afraid that compassion will not help when it will matter.

Will the real Maulana Ashrafi please stand up and tell us what the real case is? If I would not be that cynic, I may think that Maualana Sahab sometimes have to satisfy the scary lot of clergy so that they may ignore his slip of tongue in other cases. If that is so, I hope he can be more consistent in his compassionate side and shun the fears like great Salman Taseer and Shahbaz Bhatti.

That was only Satan who intimidated his adherents. But do not fear them—fear Me if you are believers. (Surah Al `Imran. 3:175)