The real story about CJ Iftikhar Chaudhry – by Peja Mistri 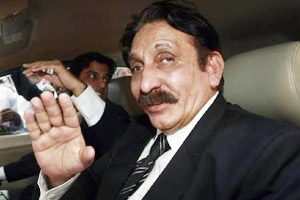 The story is very simple though.

IMC a criminal by nature

Iftikhar Muhammad Chauhdary (IMC) proved to be a thief and criminal minded person. My late father used to say that never judge a person if he steals a paltry amount as you don’t know whether he was really in need of that sum, but keep an eye on him in future and entrust him with a bigger amount, if he steals that too then he is a thief. Back in 2007, when I read the news about how and his son used fake petroleum receipts to embezzle the government money, I actually thought him to be a very honest person, so honest that even being a Chief Justice he had to embezzle through petroleum receipts of few thousands. But truth was that he and his son were basically thieves it was only a matter of chance that they could only steal the money via petroleum receipts at that time. And as soon as he got a chance he really proved himself to be a thug.

Lifetime Opportunity
After his restoration, by sheer luck, he and his son had the once in a lifetime opportunity to make the real money. However being a cunning criminal they wanted to ensure that they play safe but make money. Their plan reminds me of the stories in “Suspense” and “Jasoosi” digest in Pakistan. They prepared a perfect trap for the simpleton “Malik Riaz”. Malik Riaz already had a bad reputation and has so many cases in the supreme court so he was a perfect target. Malik Riaz was also trapped because of his association with Asif Zardari.

ISI Connection
But it is important to note that this operation was not the brain child of IMC & his son, the whole operation was planned and funded by ISI. After the departure of Pervez Musharraf and strict audit measures by US, it was not possible for ISI to dole out large sums to Supreme Court judges particularly when PPP is in government, therefore a new funding source was needed. It is also worth noting that ISI & IMC connection was established on 9th March 2007, when Pervez Kyani sat with IMC for 4 hours in Pervez Musharraf’s house chalking out the details of plan against Musharraf.

Why “PCO” Judges were fired
We must note that a huge sum was needed for keeping the “brother” judges in check. Not only that since at the time of his (IMC’s) restoration the number of supreme court judges was maximum, it was needed to get rid of few of few judges particularly the ones which were under the influence of Justice Abdul Hameed Dogar. Therefore IMC devised the strategy to fire those “PCO” judges through the SC judgement. Since it was expected that funding to bribe the judges will be small therefore the number of judges were reduced.

Scheme
So for the two years Arsalan Iftikhar extracted more than Rs. 340 million from Malik Riaz by deceiving him that his father will help Malik Riaz in his cases. It would be worth noting that exactly Rs. 250 million were used for the “brother judges” while IMC netted Rs. 90 million.

Malik Riaz who considered himself a smart businessman tried using the same means that a businessman will use i.e. document and have proof of each transaction. He thought that with those proofs if Arsalan Iftikhar tried deceiving him he will be able to get his money back. But did not know that he has been trapped. When he started getting impatient, ISI activated their moles in media to extract all the proofs from him. It is not without reason that the people like Molvi Ansar Abbasi, Hamid Mir & Kamran Khan were the first one to get in touch with Malik Riaz. Malik Riaz considering himself smart, thought that by using these “journalists” he will be able to exert pressure on IMC & Arsalan to either give his money back or at least get him some relief. He did not know that it was the trap he was falling in. Since they had extracted from him the money that was needed therefore his time was up and he was going to be dumped by ISI.

It is important to note that it was indeed a very delicate operation, ISI had to use their full strength in media and other channels to keep the damage as little as possible. But the damage could not have been avoided.

Defence Strategy
The defence strategy of IMC to save himself and his son has all the hallmarks of an ISI perpetrated operation. It is important to note that there were three clear and present dangers that could have caused irreparable damage to not only IMC & his son but also to ISI & Military.

1. The first was the media (both national media and social media).
It was not possible to control the whole media, particularly on such an explosive issue. Therefore it was imperative to put the media in such a controversy so that they have no time to concentrate on this issue. Mubashir Luqman & Maher Bukhari episode was a great success and it diverted a good bit of attention. Then with the help of PTI friends the “list” of journalists and now Dr. Sazish Barood’s (Shahid Masood) media gate, all of the efforts are integral part of defense strategy.

2. NAB/FIA and other government agencies. (State Machinery in Motion)
Since it was a criminal case and it was quite clear that even a slightest delay could get Arsalan and his father in a great trouble. Therefore the first thing was to ensure that no “state machinery gets in motion” (For those who have read the judgment by Khilji and Khwaja will now understand the real meaning of this pharase). Therefore first a suo motto was taken to ensure that no police get in motion, and then through review ensuring that NAB or FIA don’t get in any “motion” against the poor son.

3. PPP Government and it’s coalition partners
It was also important to ensure that on the political front PPP and it’s government are put on the back foot during this period. It is not without reason that the cases against PPP government were expedited during that period.

What went wrong?
As I said that the damage was unavoidable, the whole effort was to control the damage as much as possible. There were quite a few unexpected and uncontrolled events. First of all the reaction on Malik Riaz was quite uncontrollable, in the first week both ISI and IMC went on back foot against the business tycoon. Then with Faisal Raza Abdi in action, things were quite out of control, he caused some irreparable damage to IMC. Finally some of the media men and channels were completely unmanaged.

What Next
To me looks like IMC has now become a used toilet paper and his only destination is the gutter with a full flush. Only issue at the moment for ISI is how to easily flush this used toilet paper. Things will calm down in the upcoming days, however IMC might actually face an impeachment shortly. The question will be would he turn against his benefactors. So far as I understand him, he is a coward and would be content with Rs. 90 million to live a quiet retired life.

Disappointment
Personally for me it is indeed the most unfortunate thing for our nation. IMC had a great chance to become a legend in our history. He could have preferred name in history over money. But he choose the later.

P.S. All of my articles are based on fiction, any resemblance or truth is accidental and unintentional.