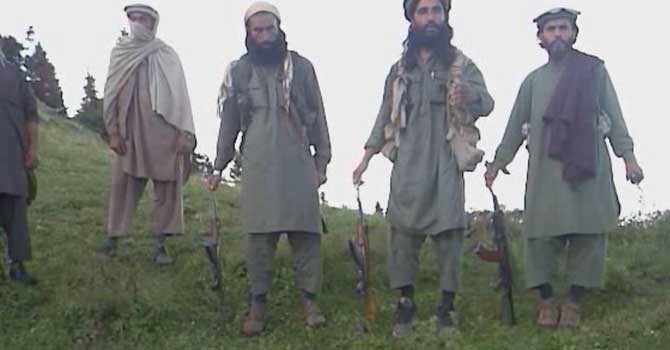 This frame grab taken from avideo footage received August 31, 2012 from the Taliban (Lashkar-e-Jhangvi LeJ) shows armed Taliban standing above severed heads of soldiers they had killed at an undisclosed location in Pakistan.

Enemies of Pakistan have once again attacked Pakistani nation, this time beheading 12 Pakistan army soldiers who were cowardly abducted by the Jihadi Deobandi-Wahhabi terrorists (Lashkar-e-Jhangvi / Taliban) a few days ago.

The latest incident shows that the LeJ-Taliban terrorists are nobody’s friends. It was foolish of Pakistani generals to nurture and treat them as a strategic asset of the state. The beasts indoctrinated with narrow minded Deobandi-Wahhabi ideology are single major threat to national security of Pakistan and the entire region.

Only a few days ago in Quetta, the LeJ-Taliban released a video of beheading of two Shiite Muslims.

If General Kayani and other commanders of Pakistan army are sincere with Pakistan, we ask them to take the following steps:

1. Immediately cut down all kind of support to the Taliban, Al Qaeda, Lashkar-e-Jhangvi (including Sipah-e-Sahaba aka Ahle Sunnat Wal Jamaat), Jundullah, Difa-e-Pakistan Council (DPC) and other affiliated militant groups;

2. Arrest all leaders of the banned Deobandi-Wahhabi terrorist groups including those operating with new names; they must be executed in full public sight as per Pakistani law because of the crimes they have committed against Pakistan army and civilians;

3. Order immediate military operation against the Taliban, Al Qaeda and LeJ/ASWJ hideouts in North Waziristan, South Waziristan, Kurram, Orakzai, Mastung, Quetta, Karachi and all other areas of Pakistan where such rats are holed in;

4. All arrested leaders and operatives of the Taliban, LeJ/ASWJ, Jundullah, JeM etc must be tried in summary military courts and executed in full public sight as per Pakistani law;

6. We also suggest that the U.S.A. administration must now overcome its lethal fantasy of dialogue and peaceful settlement with the Taliban, a fantasy in which they were lured by Pakistani intelligence agencies. USA and Pakistan are still stalking the Taliban as a peace partner while they continue to kill innocent civilians, women, religious and ethnic minorities, behead children, poison girls schools and slaughter soldiers and civilians. Any policy based on dialogue with the murderous Taliban is madness. Just last month, Barack Obama used the NATO summit to press Afghan leader Hamid Karzai to engage with greater urgency with the Taliban about a political settlement in Afghanistan. “Political settlement” is Obama-speak for surrender to jihad. The media’s silence on proposed talks with the Taliban-LeJ terrorists borderlines on sedition. (Source)

Pakistan army must stop treating them as our strategic assets. Exactly what is the ultimate goal for Pakistan in having the Taliban controlling land in Afghanistan and perhaps a few isolated parts of Central Asia? Why can’t we learn from China which has changed some of its strategic policies over the decades so that it could get economic development going and thus being able to raise the standard of living for its citizens. For Pakistan to get economic development going, it will need to change from the current path – direction that it is on. Based on news and trends, Pakistan is unable to change direction and will continue going around the world with the Begging Bowl and dealing with ongoing massacres and beheadings within its own territory (Source). 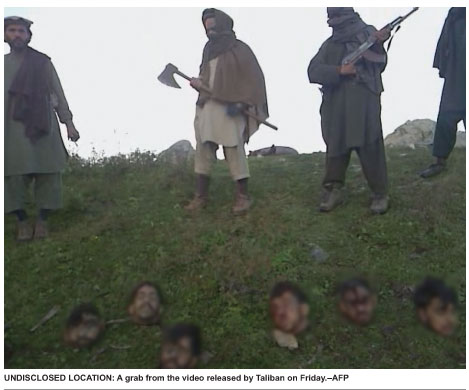 A still taken from a video released by the Pakistani Taliban showing armed militants standing over the severed heads of what they claim to be Pakistan army soldiers.

Pakistani Taliban have beheaded 12 soldiers captured during a recent attack on a security check post in the restive Bajaur tribal region and released a video showing their severed heads, a militant spokesman said on Friday (30 August 2012).

Sirajuddin, a spokesman for the Swat chapter of the Tehrik-e-Taliban Pakistan, told reporters in the country’s northwest by phone that the militants had released a video showing the severed heads of the soldiers.

The Pakistan Army says Sirajuddin is operating from Pakistan and speaks for Mullah Fazlullah, the former commander of the Taliban in Swat Valley who is now believed to be based in a border region of Afghanistan.

Journalist Enayat Saafi in Kunar province of Afghanistan said he had seen the video, which shows the bullet-riddled and beheaded bodies of the Pakistani soldiers. He said on phone that the soldiers were beheaded after being shot.

Sirajuddin said the Taliban in Bajaur Agency had killed the “infidel soldiers of Pakistan”. The Taliban video showed a militant commander flanked by several armed men, including one wielding a large axe.

The Taliban’s claim came hours after the Pakistan Army acknowledged that 15 of its soldiers went missing three days ago after clashes with the Taliban in Batwar area of Bajaur Agency, which borders Afghanistan.

Clashes in Batwar area between Taliban militants and Pakistani forces began a week ago. The Pakistan Army has said that troops have killed nearly 60 Taliban fighters, a claim disputed by Sirajuddin. Sirajuddin claimed the militants have made advances and were now fighting Pakistani forces inside the remote region.

Local residents said the army was using gunship helicopters and artillery to target militant positions in the mountains.
The army has said that several Taliban leaders fled to Afghanistan to escape military operations launched in the Swat Valley, Bajaur Agency and other tribal regions. Afghan authorities deny the claim.

The claim was made yesterday by Ishanullah Ihsan, the spokesman for the al Qaeda-linked Movement of the Taliban in Pakistan, in an email sent to The Long War Journal.

Ihsan said that 20 Pakistani troops were killed after the Taliban attacked their camp in Badar, and that 29 assault rifles, three RPGs, a machinegun, a sniper rifle, a submachine gun, and “thousands of cartridges and many small military equipments” were seized during the raid. Ihsan said seven of the soldiers were beheaded in accordance with sharia, or Islamic Law.

“Mujahideen also chopped off the heads of 7 captured soldiers as Shariah directs them to do with enemies of Islam,” Ihsan said.

In the past, the Taliban previously released videos of the execution and beheading of Pakistani troops. On June 28, a video showing the heads of 17 Pakistani soldiers who had served in the district of Dir was released by the Taliban.

The Taliban have been battling the Pakistani military in the Mehsud areas of South Waziristan for nearly three years. In the fall of 2009, the military launched an operation to defeat the Movement of the Taliban in Pakistan, and in mid-November of that year claimed to have defeated the group in South Waziristan. But the Taliban group withdrew the bulk of its forces from the Mehsud tribal areas and relocated to neighboring tribal areas, maintaining a rearguard to fight the Pakistani military.

The Movement of the Taliban in Pakistan’s South Waziristan branch, which is led by Waliur Rahman Mehsud, later returned to the tribal agency and stepped up the fight against the Pakistani military. Most of the engagements in South Waziristan are initiated by the Taliban, who have assaulted bases and checkposts, and ambushed military convoys.

Although it is now nearly three years since the Pakistani military commenced the South Waziristan operation, only one of the six areas targeted — Sararogha — has been certified by the military as cleared, according to a report in Dawn that was published on Aug. 5. The other five areas — Shawal, Sarwakai, Tairza, Makeen, and Ladha — are still contested.

Fighting in Bajaur in the past week has claimed at least 50 lives, including           31 militants and two members of a government-backed peace committee who were killed on Monday.

Bajaur is one of seven districts in Pakistan’s semi-autonomous tribal belt, where Taliban and al Qaeda-linked militants have carved out strongholds used to plot attacks on Pakistan.

Tehreek-e-Taliban Pakistan (TTP) spokesman Sirajud Din sent AFP a video showing a militant commander posing with 12 heads arranged on the ground which he claimed were from soldiers they had killed.

“Praise be to God that the mujahideen in Bajaur agency have managed to kill the infidel soldiers of Pakistan,” he says.

“Many of them were killed by bullets, 12 of them as you see have been beheaded, you see 12 heads here, and more heads are on the way.”

The commander, his face unmasked and wearing traditional tribal dress, is flanked in the footage by armed men including one wielding a huge axe.

The video also showed the identity cards of the dead men, but military sources have so far not said whether they are the missing soldiers or confirmed that those shown in the video are Pakistani troops.

The speaker said they had been killed to avenge “brutalities” carried out by Pakistani troops.

Fighting in Bajaur in the past week has claimed at least 50 lives, including 31 militants and two members of a government-backed peace committee who were killed on Monday.

Bajaur is one of seven districts in Pakistan’s semi-autonomous tribal belt, where Taliban and Al-Qaeda-linked militants have carved out strongholds used to plot attacks on Pakistan.

Pakistan has lost more than 3,000 soldiers in the fight against homegrown insurgents but has resisted US pressure to do more to eliminate havens used by those fighting the Americans in Afghanistan.