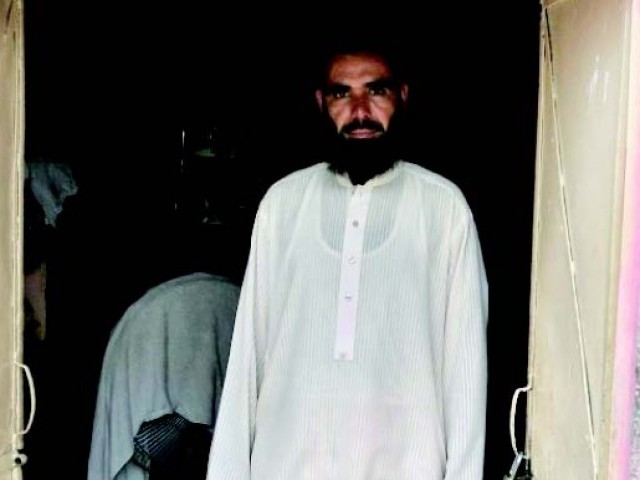 After Mumtaz Qadri, this man could be next icon for Punjab's educated middle class

Hafiz Mohammed Khalid Chishti, the imam of the mosque who allegedly issued a decree on his mosque’s loudspeaker to burn Christians of Mehrabadi village alive in the aftermath of 11-year-old Rimsha Masih being accused of blasphemy, denied instigating a hate campaign against the community. Chishti was said to have declared that, ‘All you chooras (a derogatory term for South Asian Christians) must leave here immediately or we will pour petrol on you and burn you alive …You sweepers are only deserving of such treatment.’

However, he told The Express Tribune on Friday that he never played a pivotal role in sparking any tensions, after Rimsha, who reportedly suffers from Down Syndrome, allegedly burned pages inscribed with verses from the Holy Quran.
“Neither I, nor any of my followers participated in the protest rallies. Nor did they instigate any hate campaign against the Christian community of Mehrabadi,” Chishti said, adding that “It was a legal issue that involves Rimsha and the eyewitnesses, which will be resolved in the court of law.”

Clarifying his position, the imam told The Express Tribune that he went to Rimsha’s home after people showed him the papers Rimsha had burned.

He found an angry crowd outside and three to four women attacking her. He claimed that the protestors demanded custody of Rimsha to burn her alive, but he rescued her and later handed her over to the police.
Rimsha committed ‘conspiracy’

Despite backtracking from his earlier stance, Hafiz Chishti was still scathing of the alleged blasphemy committed by Rimsha Masih, saying what she did was a “conspiracy” to insult Muslims.

He told AFP that “The girl who burnt the Holy Quran has no mental illness and is a normal girl. She did it knowingly; this is a conspiracy and not a mistake. She confessed what she did.”

Chishti claimed that the local Christian community had previously caused antagonism by playing music in services at their makeshift church during Muslim prayer time and said burning the pages was deliberate.

“They committed this crime to insult us further. This happened because we did not stop their anti-Islam activities before,” he said.

“Last Christmas, they played musical instruments and there was vulgarity in the streets during our prayers time. I warned them but they did not stop.”

During his sermon at Friday prayers, Chishti told worshippers it was “time for Muslims to wake up” and protect the Holy Quran. (Source) 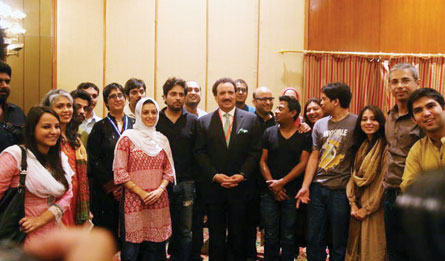 Rehman Malik with this admirers in Pakistan's elitist civil society

The Interior Ministry, led by Federal Interior Minister Rehman Malik, has asked the Islamabad police to oppose the bail request of Rimsha Masih, an 11-year-old Christian girl accused of burning pages of the Holy Quran, on the pretext that her release would put the lives of Rimsha and her family in danger, BBC Urdu reported on Saturday.

An Interior Ministry official, asking not to be named, told BBC Urdu that the Intelligence Bureau and the Special Branch of the Islamabad Police had informed the Interior Ministry in writing that there was serious threat to the lives of the Christian family if the girl, reportedly suffering from Down Syndrome, was released on bail.
The official said that Rimsha was more safe in jail and the administration should keep her in custody until the matter was fully resolved and public sentiment ‘cools down’. The report said that the matter could turn more serious if it was tried to resolve in haste.

Investigating officer of the case, Munir Hussain Jaffery told BBC Urdu that the police prosecution branch had not received any notice from the court regarding Rimsha’s bail application, the hearing for which has been scheduled for August 30.

The BBC Urdu report said that the Islamabad Police had sent a preliminary report to the Interior Ministry which said that Rimsha could not read or write but she had admitted to setting the holy pages on fire. The police have also decided to set up a medical board to ascertain the age and mental health of the accused minor girl. Additional Deputy Commissioner Farasat Ali Khan told BBC Urdu that the police had asked the Polyclinic Hospital to form a medical board and Rimsha would be presented for examination before them on August 27 (Monday). The board will present its report within one week, he added. (Source)

Based on the security argument, all PPP ministers, Ahmadis, Shias, Balochs etc should be thrown in jail to save them from never ending murder, harassment and persecution by religious fanatics and trerrorists.

If protection is a valid reason for Rimsha being jailed, then Rehman Malik too deserves to be in jail because of immense threat to his life by “foreign-sponsored” TTP, LeJ etc. That will be apt as the LeJ chief Malik Ishaq, ASWJ chief Ludhianvi and LeJ-ASWJ regional operatives in Karachi, Quetta, Peshawar are allowed to freely incite violence by federal and provincial governments.

How else can we describe a State which can provide security to an innocent, mentally-handicapped girl in a prison only: a failed state!

Hats off to Rehman Malik and of course Pakistan Peoples Party.