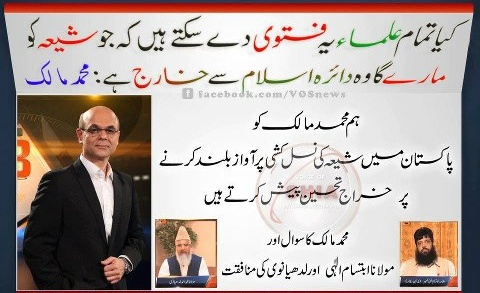 In his recent episode of Dunya @ 8 (on 22 Aug 2012), Mohammad Malick presented a very balanced and objective programme on Shia genocide taking place in Pakistan at the hands of the Taliban and Lashkar-e-Jhangvi (also operating as Sipa-e-Sahaba and Ahle Sunnat Wal Jamaat).

In particular, they highlighted the following:

1. Complicity of Pakistani security agencies with LeJ-SSP terrorists;
2. Hypocrisy of Deobandi-Wahhabi clerics and their reluctance to issue fatwa against killers of Shias;
3. The wide scale of Shia genocide taking place in all areas of Pakistan, from Gilgit to Quetta and from Karachi to Parachinar, against a community comprising at least 20 million people.

In short, Mr. Malick’s coverage of Shia genocide will put many so called liberals to shame who haven’t written a single column or hosted a single TV programme on this topic (barring an one off tweet or comment).