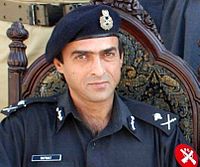 A Pashtun hero in Pakistan's war on Jihadi extremism

Earlier this month (4 August), it was the second martyrdom anniversary of Safwat Ghayur, the brave Pashtun police office who sacrificed his life in saving Pakistan from the Jihadi-sectarian assets of the Deep State. LUBP has archived a few posts dedicated to Ghayur. https://lubpak.com/archives/tag/safwat-ghayur

Additional Inspector General of Police Safwat Ghayur (July 14, 1959 – August 4, 2010) was a senior two-star police officer serving in the Khyber Pakhtunkhwa Province of Pakistan as commandant of the Frontier Constabulary. A respected police officer, and a leader in the country’s fight against terrorism, he was killed in a suicide attack by the Pakistani Taliban.

Before joining Pakistan’s civil services, he used to be an active member of PSF, which is a student body affiliated with the ruling Pakistan Peoples Party.

Here is a worth quoting excerpt from Ismail Khan’s tribute A hero who died with his boots on: A tribute to Safwat Ghayur

After interrogating a rabid anti-Shia militant he had cap tured in 1995, he sent a report to the government, asking for a “dispassionate review” of Pakistan’s policy of patronising the various militants groups. “These are nameless, faceless people”, he would say then. “One day, these chickens will come home to roost.” But then Safwat’s encounters with militants started back in the 90s, with local ones as well as foreigners, when he was SSP, Peshawar. Then he rounded up hundreds of foreign militants, after Islamabad ordered a crackdown following an attack on the World Trade Centre in New York which was traced to a Peshawar-based group led by Ramzi Yousaf. Later, in April 1997, he planned and executed Operation Garbage Dump to flush out a group of foreign militants holed up inside a compound in Jalozai just outside of Peshawar.

Apparently, his appeal for dispassionate review of the policy of appeasing and supporting Taliban, ASWJ-LeJ by the Pakistani State fell on deaf ears.

Two years ago, in August 2010, women gathered around the coffin of Frontier Constabulary commandant, Safwat Ghayur, who had been killed earlier in the day by a suicide bomber at a busy intersection of Peshawar, as he stopped at a traffic signal on his way home. Amongst the mourners was his young widow, shocked but composed. Near her sat other young women who had lost their husbands, wives of police officers who had been the mainstays in Khyber Pakhtoonkhwa’s police service. All had been killed by militants.

In villages in faraway Punjab, women tremble in fear and uncertainty; women uncertain about their martial status as their husbands lie entombed under tonnes of snow on the Siachen Glacier. There are thousands of them all over the country. These are the faces of Pakistan’s convulsions the world won’t ever see—a continuing tragedy where the military frames the nation’s foreign and security policies, decisions marked by a steady trickle of soldiers’ deaths.

Today, policies on Kashmir and Afghanistan and bilateral relations with the US and India have come home to roost in Pakistan’s blood-soaked cities. Demoralised Pakistanis hardly repose faith in a discredited government as it battles the judiciary in a fight for life, all the while laying claim to constitutional power and invoking the inviolability of democracy.

Though Chief of Army Staff General Pervez Ashfaq Kayani has, in his Independence Day address, strongly hinted at a fresh offensive against Al Qaeda operatives and the Haqqani network in North Waziristan (also referred to by the US secretary of defence Leon Panetta), inaction has been the rule of the game till now. When asked why he was not taking on Punjabi jehadis, Kayani responds, “We can’t afford to open too many fronts.” The presence of Afghanistan’s Haqqani network in Pakistan has also, till now, been ignored on the same pretext.

This inaction by the Pakistani State against Jihadist militants has also been recently explained and lamented upon by Urdu columnist Saleem Safi who is concerned that inaction can bring no good for Pakistan and Afghanistan.

The lack of concerted action against Jihadi-sectarian militants in the Punjab, KP, Balochistan, Sindh and GB is not only injurious to the already bleeding nation, it is also an insult to the sacred memory of Safwat Ghayur.