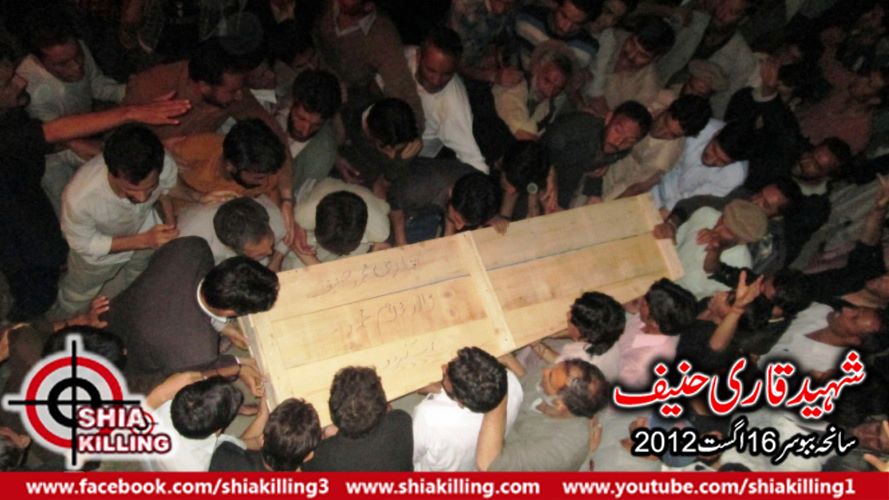 PAKISTAN: Men in uniforms of the armed forces went on a rampage of sectarian violence attacking and killing Shia Muslims who make up the second largest Muslim sect after the Sunnis. According to the reports from Gilgit-Baltistan, the northern district of Kohistan, where sizeable numbers of Shia Muslims reside, on three different occasions this year, members of the Shia sect were dragged out of passenger buses, asked to show identity cards and after confirming they were from Shia sect they were put in the line and killed.

On the same day (August 16) when Shias were massacred in Mansehra district, in a pre-dawn attack around a dozen persons in uniform entered the well-guarded air base of the Pakistan Air Force at Kamra, 50 kilometers from Islamabad, the capital of the country. They remained there for some time and damaged one of the surveillance aircraft; used rocket propelled grenades and killed two officers. This is the fourth attack since 2007 and it is believed that terrorists are attempting to steal the nuclear assets which are stored there.

It is interesting to note that in the attacks on the General Headquarters of the Pakistan Army in Rawalpindi, the naval base in Karachi, the headquarters of the intelligence agencies and several attacks on air force bases not one person has been held responsible. In fact, it has been revealed that persons employed on the bases worked in collusion with the attackers. The armed forces are attempting to hide the fact that their own men are involved in these attacks and it is evident that militancy has seeped into their ranks. This is one reason why killings and violence against religious minorities are never fully investigated as they are being carried out by serving soldiers.

There is very obviously a nexus between the perpetrators of these incidents, the armed forced and the criminals released earlier on the instructions of the judiciary. It is too much of a coincidence that the killers are in possession on military uniforms and weapons. High ranking military officers are trying to place the blame on the judiciary for releasing these men, however, it cannot be denied that they are receiving assistance from the military, even if it is only in turning a blind eye to the killings that take place in close proximity to army check posts.

The Pakistan judiciary, particularly the Chief Justice of the Supreme Court, who is very famous for taking Sou Moto action on the petty issues, is being held responsible by the Shia religious groups, (30 percent of the population), that the judiciary is responsible for releasing all the terrorists who were involved in the killings of Shia members. General Pasha, former chief of the notorious intelligence agency, the ISI, has also blamed the judiciary during the briefing at Parliament, that 992 terrorist were released by the courts who had been arrested by the law enforcement agencies after a great deal of hard effort. Another accusation by the Shia leaders is that in 2010, the Chief Justice visited the Karachi jail during the evening and had 28 terrorist released and it is those people who were involved in the killings.

In the recent incident of August 16, in the early morning, the four buses, carrying passengers from Gilgit to Rawalpindi, a city of Punjab, were halted by around 50 men in military uniform who placed heavy stones and wooden logs on the main road at Babusar Top in Kaghan valley, Mansehra district. All the passengers were asked to alight from the busses and show their national identity cards, after identifying 25 persons as Shia Muslims they were instructed to stay at the side of the road. Their hands were tied and more than a dozen assailants opened fire at them. After the shooting they marched away in military style shouting Allah ho Akbar.

Earlier on February 28, 2012, gunmen in military fatigues hauled the passengers from a bus and in the same fashion killed them on the road side after checking their national identity cards. The passengers were travelling from Rawalpindi to Gilgit, the northern district of Kohistan.

On April 3, a mob dragged nine Shia Muslims from buses and shot them dead in close proximity to a military check post that was fully manned. There was no response from the soldiers.

People from the Hazara community of Balochistan belong to the Shia community and on many occasions have been massacred near military check posts.

One of the amazing things to come out of these killing is that the blame is always placed on the Taliban Pakistan or Lashkar-e-Jhangvi and Sipah-e-Sahaba (banned Islamic militant organizations). It is believed that the intelligence agencies issue such statements in an attempt to cover up the crimes of their men who are very much close to the Taliban and other banned militant organizations. These agencies are in turn very much involved, along with the armed forces, in the politics of the country and in maligning the civilian representatives for putting the country on the road to democratic norms.

There is a very real need for the parliament to ensure that there is complete transparency in the affairs of the military. Their budgeting allocations, disciplinary proceedings and investigations into the criminal activities of their own personnel must be brought out into the open. The hierarchy of the armed forces must be made responsible for the actions of the officers and rank and file under them. Command responsibility must be a high priority and it is only the government that can ensure this. If the military hierarchy consider themselves above the government then the time is ripe for another military take over.

The Chief Justice of Pakistan is keen on taking sou moto action in cases that are relatively minor. He should now use this judicial action against the involvement of persons from the armed forces in militancy, killing and sectarian violence. Pakistan cannot afford another period of military rule and it is only the parliament and the Supreme Court that can ensure that this does not happen by bringing the military into line.