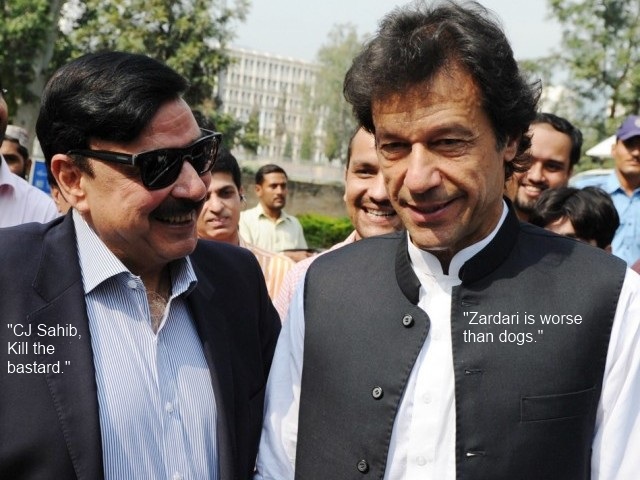 In a joint political rally by Imran Khan’s PTI and Sheikh Rashid’s Awami Muslim League in garrison town of Rawalpindin, Sheikh Rashid Ahmed called upon the Chief Justice of Pakistan to “kill the bast***d before he kills you”. He is alleged to be referring to President Zardari.

There can be no doubts about Sheikh Rasheed’s intent which is incitement to murder.

This gives rise to some uncomfortable questions:

1. Why would a failed Jihadist politician refer to the judiciary to kill anyone, let alone the elected President of the country?

2. Can Pakistan’s upper-middle class, the bulk of whom support PTI, PML-N, MQM and the Judiciary afford to associate themselves with such reprehensive, violent and abusive behavior.  Given Pakistan’s bloody history of military coups and extremist violence, this question answers itself.

3. Will Pakistan’s Judiciary take notice of this incitment to murder and more importantly, will it prosecute Sheikh Rashid for his public admission of such crime?

President Zardari is the  symbol of the federation of Pakistan and has been elected by the Parliament.  Parliament must take notice of this incitement to murder and take action against Sheikh Rashid. If the Supreme Court does nothing, then by default it becomes a party to this incitment to murder.  The failure of the higher judiciary to take action on this may make it complicit in this hate crime. In such an instance, Parliament must also take action against the Supreme Court.

Will Pakistan’s elected parliament show enough spine to take appropriate action against a judge who is so blatantly hostile to constitution and parliament?

Sheikh Rashid like his fellow DPC comrades, Malik Ishaq of ASWJ-LeJ and Hafiz Saeed of JuD-LeT, does not belong to the Pakistan Peoples Party (PPP).  By now Pakistanis know that this PCO Judiciary is only concerned in derailing the elected Government.  Jihadis, PTI, PML N, family members and the ISI enjoy immunity from the Law.  To reiterate, failure of the Judiciary to take notice of this incitment to murder makes them complicit.

A judiciary that undertakes judicial activism for two bottles of liquor, a slap inside a polling booth in a remote town in Sindh and the prices of samosas cannot pretent to ignore this incitement to violence within a few miles radius of the Supreme Court!

It will be most interesting to see the response of Pakistan’s partisan media (both English and Urdu) and civil society on this.  Will their romance with the PTI, CJP and its violent Jihadi allies continue? Like many of the earlier questions, the answers are all too clear.

Post Script: Barring the exception, much of Pakistan’s media continues to mantain a silence on this issue. Failed politicians like Shiekh Rashid and Imran Khan are after all media darlings.  Unlike elected PPP leaders, they are given ample and disproportionate media space to spew their hateful, bigotted and xenophobic message.  Nusrat Javeed is one of the few journalists who took up this issue in his Bolta Pakistan show yesterday (14th August, 2012).

Not only did Sheikh Rashid incide the CJP to murder, he also called Mullah Omar “Amir-ul-Momineen” (Leader of the Faithful) and requested the latter to issue Imran Khan with a visa for his pro-Taliban rally in North Waziristan later this year. Similarly, he extorted General Kiyani, albeit in a more roundabout manner,  to stop the military operations against the various Taliban militias in Swat and North Waziristan.

And this man is the political ally for Kaptaan Imran Khan. Enough said!