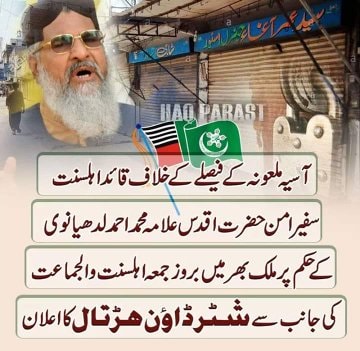 While the situation in Pakistan is precarious countrywide, there is a silver lining.

1. Both PPP and PTI leaders support the SC decision. They represent the majority of parliament.

2. TLP has overreached itself by threatening SC Judges and the army

3. PM Imran Khan seemed confident and he would only do so if he was sure of support from the right place, i.e. the army.

4. TLP and ASWJ are both exposing themselves on the global level.

5. If TLP fail – and they have set themselves up for failure – then they have little to fall back on. Their foundation as a Barelvi supremacist organisation is predicated on the assumption that a security guard who shot an unarmed man is somehow a Saint. The Supreme Court decision is a huge blow to this very foundation

6. Similarly, the more Rational and armed Deobandi supremacist organisation, ASWJ-LeJ is also shook by this decision. Their reason to exist is to equate Caliph Yazeed with Divinity and redefine basic human morality. But they lack the numbers and this verdict harms their already weak case.

7. The boutique Left-liberals in Pakistan are dependant on portraying themselves as an elitist island of moderation within a sea of crazies. A weakened crazy segment harms their emotional blackmail to (selectively) sell the blood of victims and extort money from NGOs, donor agencies and consulates. The same section had hailed the PML N leadership as the epitome of liberalism, democracy and resistance in Pakistan. When in fact the opposite was mostly true.

No other political party has been as complicit in supporting TLP and ASWJ/Sipah Sahaba as PML N has. And No other political party has seen as much sympathy from the boutique left-liberals in recent times as PML N has. The Sharif dynasty is at the nexus of both ASWJ and TLP and the largest patron for Pakistan’s boutique left and commercial liberals.

Post Script: Obviously, this is a fairly fluid situation. A lot can go wrong and as Pakistanis, the overwhelming majority of us don’t revel in the misfortunes facing in the country. We strive for solutions instead of cheering destruction. It is in that light that this post has been composed. Some of us see a sliver of opportunity to see a transition to a Pakistan where TLP and ASWJ have overextended themselves and are paying dearly for their hubris. If PM IK, SC Judges and General Bajwa are forced to respond with force against these Yahoos, then it would be good for Pakistan.