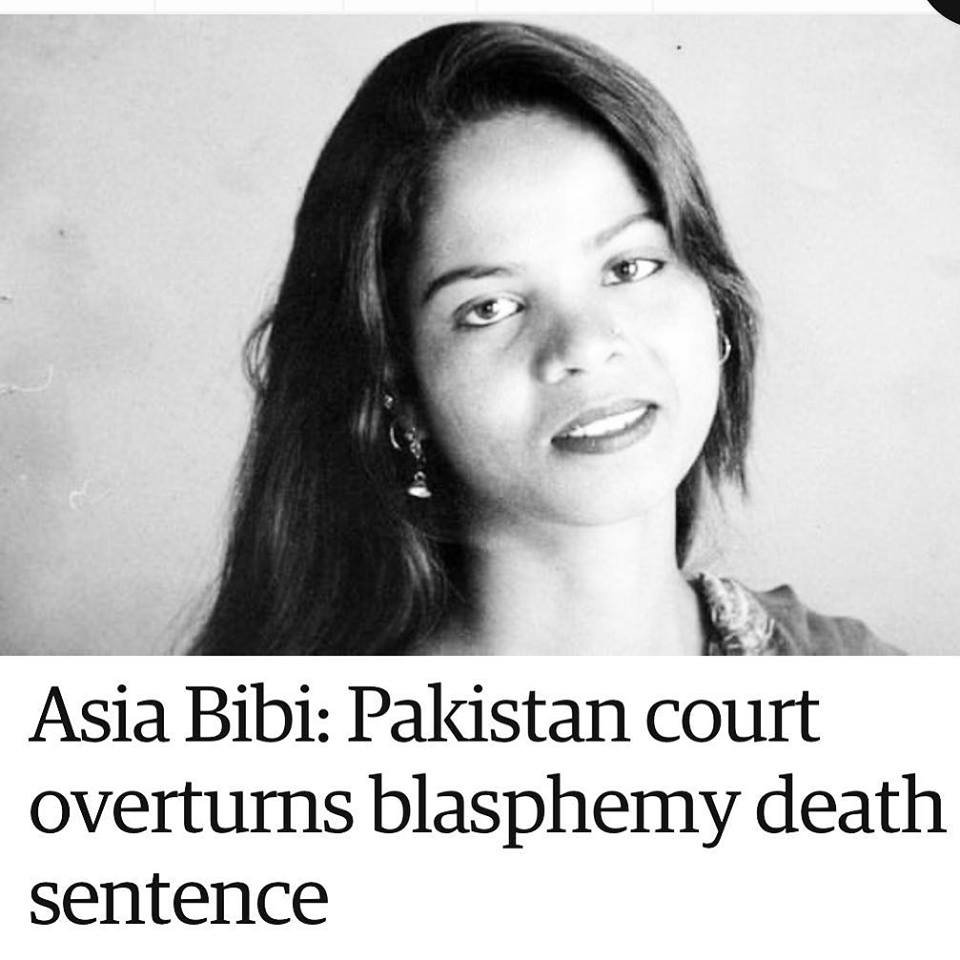 As a Pakistani, We ought to hang our heads in shame after the ordeal this innocent Christian sister of ours has gone through.

This raises so many questions about the culpability of the State itself as well as the right wing-dominated establishment of Pakistan.

The Supreme Court has actually failed on list counts because a) it took them nearly a decade to acquit Asia Bibi when it should have taken them a few hours! Pakistan’s spineless judiciary once again failed to go after Khadim Rizvi and Afzaal Qadri. It had failed to go after Sipah Sahaba and Abad Dogar – a PML N/Sipah Sahaba ticket holder who put head money on Taseer that lead to his murder by the PML N appointed security guard Malik Mumtaz Hussain .

And the Supreme has failed to go after the PML N and PTI leadership for their criminal role. The Sharifs were deadly enemies of Taseer and backed the Blasphemy brigade in Punjab. PM Imran Khan justified Taseer’s murder on CNN (with Elliot Spitzer)

It takes hours for the Supreme Court of Pakistan to intervene and pass judgement in cases against the PPP. It took the same Supreme Court nine years to finally acquit an innocent Christian woman #AsiaBibi. During this time, we lost Salman Taseer and Shahbaz Bhatti. This delay caused the state of Pakistan that much more space to hate mongers.

“It may be advantageous to read again what the appellant (Aasia Bibi) had stated in her statement recorded under section 342, Cr.P.C.:

“I am married woman having two daughters. My husband is a poor labourer. I used to pluck Falsa from the plants of Muhammad Idrees along with number of ladies on the daily wages basis. On the alleged day of occurrence, I along with number of ladies were working in the fields. Both the ladies Mst. Mafia Bibi and Mst. Asma Bibi PWs quarreled with me over fetching water which was offered by me to bring for them but they refused saying that since I am Christian, so, they never took water from the hand of Christian. Over this, quarrel was insued and some hot words were exchanged between myself and the PWs ladies.

The PWs then approached Qari Salaam complainant through his wife who remained teaching the both ladies, hence, the PWs were conspiring with Qari Salaam got a false, fabricated and fictitious case against me. I offered my oath to police on Bible that I had never passed such derogatory and shameful remarks against the Holy Prophet (PBUH) and the Holy Quran.

I have great respect and honour to the Holy Prophet (PBUH) as well Holy Quran and since police had conspired with the complainant, so, the police has falsely booked me in this case. The PWs are real sisters and interested to falsely involve me in this case as they felt disgrace and dishonor on the basis of altercation and hard words extended to them.
Qari Salaam complainant is also interested person and both the ladies remained teaching Holy Quran from his wife. My forefathers are living in this village since creation of Pakistan. I am also about 40 years old and since the alleged occurrence, no complaint likewise this never exist against me. I am uneducated and no priest of Christian. So much so there is no church of the Christian in the village, so, being ignorant ofany Islamic thought, how can I use such clumsy and derogatory remarks against the beloved Prophet (PBUH) of Allah and the Divine book viz Holy Quran. PW Idrees is also a interested witness who has close family links with their above said ladies.”