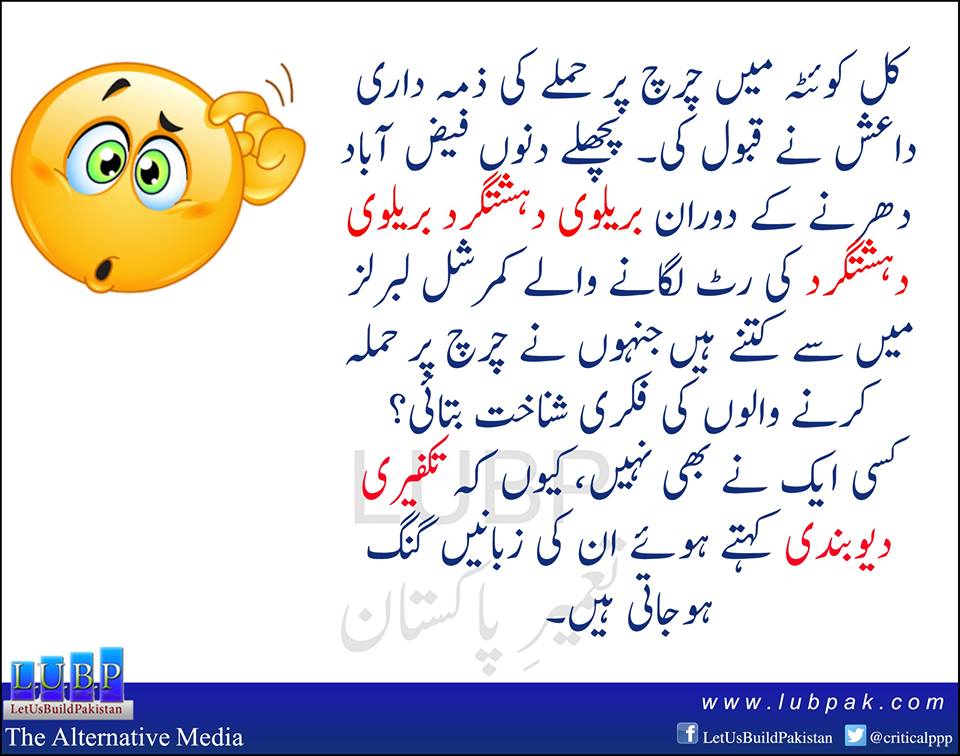 Last month as the spineless and complicit PML N government fomented the thug and abuse rally of Khadim Rizvi, PML N’s blind supporters all remembered the Barelvi identity of Khadim. Pakistan’s civil society is quick to call out any stupid bigotry from Aamir Liaquat and applaud his censure ship by an obscurantist judge.

Where is their proportional outrage and identification of the Deobandi sect – whose Takfiri terrorists have killed over 70,000 Pakistanis – including Pakistani Christians in Quetta yesterday!

When Raza Rumi, Sherry Rahman, Nasir Jamal and Marvi Sirmed are promoting a Deobandi hatemonger #TahirAshrafi, Pakistan’s commercial liberals either go mute or backtrack. When Deobandi terrorists perpetrate their latest atrocity – like yesterday, their identification is wiped out by the media, civil society and commercial liberals. As are their links and patronage by Nawaz Sharif and Saudi Arabia.

To reiterate, those who are selective, sectarian and dishonest and obscure the Deobandi identity of terrorists and who create excuses for #DeobandiTerrorism are also complicit in yesterday’s atrocity against Christians.

1. Khadim Rizvi is conflated with all Sunnis (Barelvis)

2. When the massacre of Shias, Sunnis, Hindus and Christians – ALL by Takfeeri Deobandis- is justified as a)Saudi vs Iran/Sunni vs Shia “proxy war”, b) Street Riot ala NFP style c) Reaction to Jhangvi feudals by General Zia ul Haq/Saudi Arabia/CIA backed Deobandi Marxists d) Response to annual Milad and Ashura commemoration

4) When Khadim Rizvi and Mumtaz Hussain’s (aka Mumtaz Qadri) association with Sunni Barelvis is clearly and excessively spelled out but the Taliban/ISIS/Sipah Sahaba/JeM association with Deobandis is always omitted.