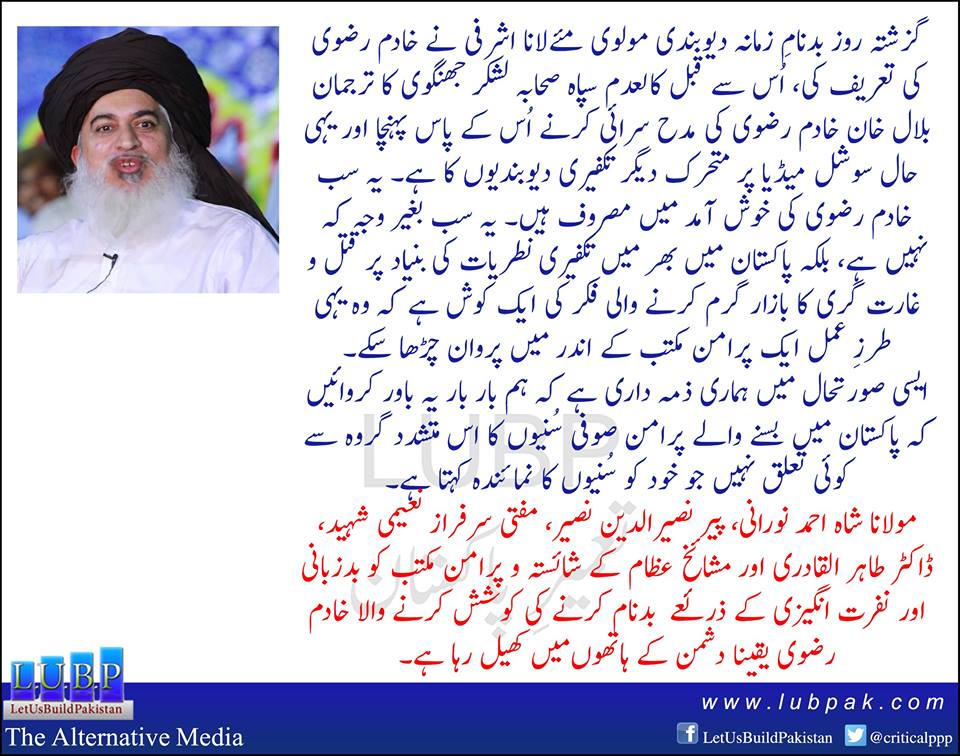 Blocking the roads of Islamabad, engaging in boorish, thuggish behaviour and voicing hate will ensure that Sunni Barelvis are categorised as extremists. However, killing 70,000 Pakistanis from all faith groups in targeted as well as indiscriminate attacks will ensure that commercial liberals will still not mention the Deobandi identity of the perpetrators. Not only that, they will label anyone as a “sectarian” for simply pointing out this fact.

It is precisely these double standards that are pushing other faith groups to imitate and adopt the reprehensible postures of Takfeeri Deobandis.

Sunni Barelvis have suffered thousands of casualties when Deobandi suicide bombers targeted Sufi shrines across all of Pakistan. Sufi shrines are mainly frequented by Sunni Barelvis. For decades, they stood up to the Taliban and watched their leaders and activists get blown to bits. Sunni Barelvi leaders like Saleem Qadri, Abbas Qadri, Iftikhar Bhatti and Sarfaraz Ahmad Naeemi paid with their lives for standing up to the terrorism of the Deobandi Taliban and Sipah Sahaba.

Pakistan’s sectarian liberals ignored or simply dismissed the sacrifices of the Sunni Barelvi leadership from the 1980’s to the present in standing up to the Taliban. Not only was civil society apathetic to their suffering; sections of civil society dismissed it in their typical False binary justifications.

This Fake liberal Mafia displayed an indecent glee at the radicalisation taking place within some Sunni Barelvi factions. It is as though they are reading from the same script as Establishment hacks as Talat Hussain. The reprehensible idea of equating entire Sunni Barelvi and Shia communities with Deobandi terrorist organisations is a tactic shared by both right wing Apologists as well as Fake liberals. 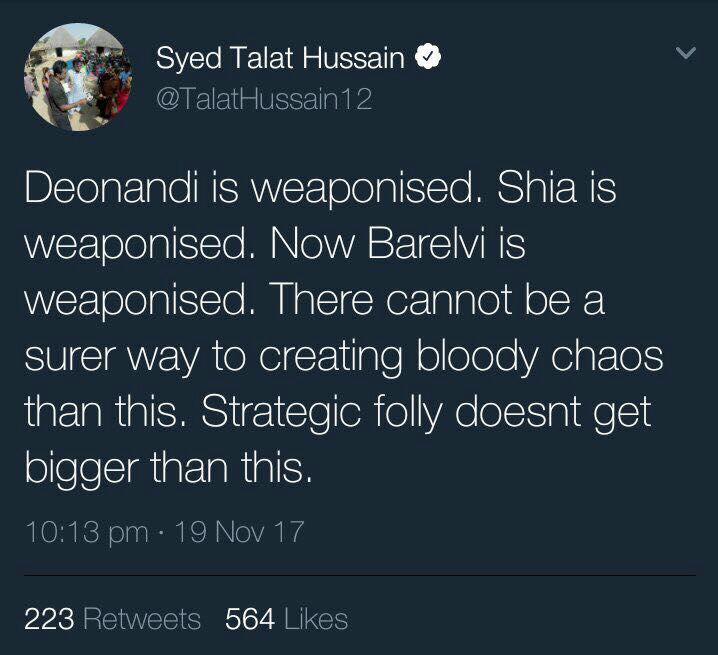 This instance of False Moral Equivalence continues to obscure the glaring reality that terrorism in Pakistan is dominated by ISIS-affilated Deobandi terrorist groups. Both rabid right wingers as well commercial liberals often share the same sectarian tendencies as Sipah Sahaba/ASWJ.

Therefore, it is hardly surprising that an increasing number of Pakistanis felt that the only way to survive in this society of double standards is to adopt the despicable acts of those who targeted them. Others have seen the State and the “liberal intelligentsia”‘s support and obscuring of #DeobandiTerrorism.

Did one honestly think that decades of this behaviour by one group was not going to affect other faith groups?

Since 1978, US-backed military dictator General Zia ul Haq formally applied State resources to create and sponsor Deobandi mobs and militias that were used to attack and murder Shias. The locality of Ali Basti Golimar, in Karachi, Sindh was attacked by Zia ul Haq backed Deobandi mobs. These mobs drawn from IJT, killed scores of Shia Muslims and burnt down their houses.

All this happened before the Iranian Revolution even took place. Pakistan’s commercial liberal sellouts, like Nadeem Paracha, frequently misuse the revolution in Iran as an excuse to justify terrorism and bigotry in Pakistan.

For the next 33 years, Sunni Barelvis, Shias, Christians and Hindus were relentlessly targeted, lynched and marginalised under General Zia ul Haq and his Legatees like Nawaz Sharif. Nawaz Sharif frequently and publicly supported Deobandi hate and terrorist groups like Sipah Sahaba aka ASWJ-LeJ during this time and ostensibly even today.

However, for Pakistan’s commercial liberals, extremism, terrorism and bigotry was not a big deal when their Deobandi co-sectarianists were engaging in it. It only became a problem when sections of other faith groups started to adopt the Deobandi tactics of hate, Takfeer and violence.

So when PPP Governor Taseer was cowardly gunned down by a PML N appointed security guard in 2011, it was the rare occasion when Pakistan’s commercial liberals were clear about the murderer’s Sunni Barelvi faith identify. All other important details were quickly cast aside and the commercial liberal Mafia quickly went about holding the Sunni Barelvi community collectively responsible.

Crucial details such as the condemnation of Taseer’s murder by leading Sunni Barelvi clerics like Dr Tahir ul Qadri were deliberately omitted from the manufactured consensus. So was the complicity of Sipah Sahaba Deobandi politicians like Abad Dogar who had placed a multi million ruppee “head money” for Taseer. Missing from this narrative was the insidious role of Deobandi parties like JUI F which supported some Sunni Barelvi clerics against Taseer.

Governor Taseer was murdered weeks after the Religious Affairs Minister, Hamid Saeed Kazmi was entrapped by the Saudis and Nawaz Sharif in the Hajj scam. With Hamid Kazmi out of the way and Deobandi JUI intent on betraying the PPP coalition, the restraints were off. The media along with JUI and PML N encouraged and supported rogue Barelvi Mullahs in their hate campaign against Taseer.

Deobandi hatemonger Tahir Ashrafi, a favourite Mullah for Pakistani liberals supports the current rallies by Barelvi clerics. After Taseer was killed, Tahir Ashrafi publicly painted the next target on Minorities Minister Shahbaz Bhatti. Weeks later, Bhatti was killed by the Deobandi Taliban. The liberal double standards was evident once again in their vague and generic response to the murder of Bhatti.

It was as though the last 33 years had not occurred.