Home  »  Newspaper Articles   »   An anathema for the system 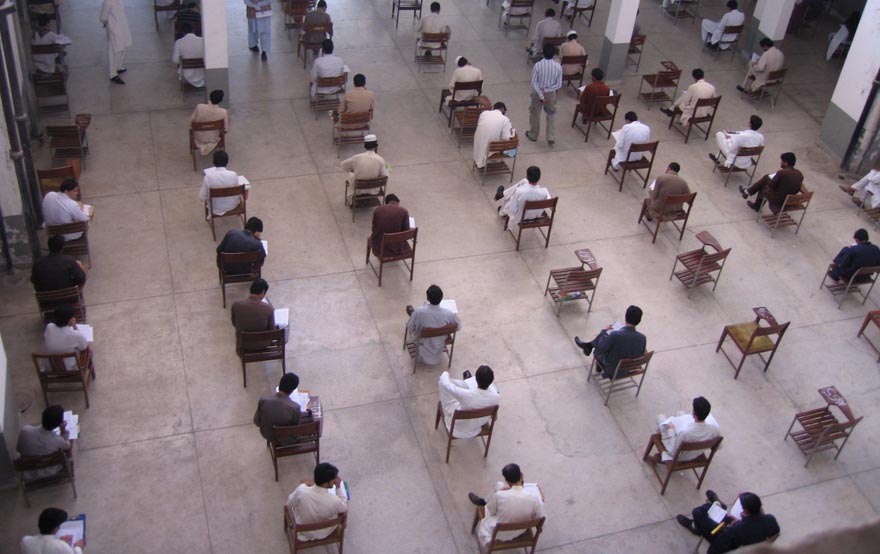 In a recently held entry test for the Punjab medical colleges, even a student scoring 93 per cent marks in F.Sc failed to make it to any government-run institution offering instruction in medicine. The situation is alarming to say the least. It is not because the standard of education has rocketed to the skies; conversely it has plummeted, which ironically does not reflect in the exam results. Thus the whole system of imparting instruction and conducting assessment has become a mockery.

Many students, having passed their respective examinations in flying colours, when appear in an entry test for any good university generally fail to secure admissions.

Among the many pitfalls of our system of education, a flawed system of assessment is the most prominent. Lamentably, over the years, most examinations conducted through government-run assessment boards (including Provincial Public Service Commissions) deploy short/objective/multi-choice questions casting aside the tested and tried practice of descriptive-analytical method of testing the student’s capability.

It is highly ironical that the Punjab Public Service Commission, for the past many years, has resorted to multiple choice questions in the written tests, conducted in order to ascertain ability of the candidates aspiring for government employment in the province. Even the tests meant to judge any candidate wanting to become a lecturer in History has to memorise huge corpus of small details. That is despite the evident fact that history is descriptive-analytical discipline in its very essence.

In order to facilitate the candidates, MCQs book are being printed at Urdu Bazaar in a large number. The descriptive-analytical narrative of history (as well as of other social sciences) seems to have gone redundant in the public sectors schools and colleges. Memorising small nuggets of historical information has become a definitive mantra at the matriculation and intermediate levels. Therefore, the method of constructing an argument in a systematic fashion or engaging with tenuous questions by employing theoretical tools are not the part of instruction that is provided to them at the matric and intermediate levels.

The whole educational set-up is working to the benefit of private entrepreneurs. We have such entrepreneurs catering to the needs of every social strata of our society. The elite system of schooling has flourished in the Lahore Grammar Schools and Beacon House schools Systems where MCQs and objective type assessment is being used in a very guarded fashion. Thus the students going to such schools are tested by giving essay (you may also read ‘theoretical’ here) type exams. Even in the science subjects the proportion of MCQs does not exceed more than 25 per cent. The outcome of instructing students on that pattern yield dividends in the form of their rate of acceptability in the world class universities which is staggeringly high in relation to the public sector schools and colleges.

The social stratum that is financially constrained tends to send its kids to affordable set(s) of schools and colleges which too are privately owned. The chains like KIPS and Punjab Schools and College are the main beneficiaries of the skewed education policies, put in place by the government.

Dar-e-Arqam is yet another such chain that has its presence in most cities of Punjab. These schools/colleges specialise in preparing students specifically for the board exams. It will be really interesting to carry out a study on the teaching methods being used in these schools and colleges. What else than the promotion of the rote learning will be on offer? It will of course be a pertinent question here.

One cannot also rule out devious means and practices used by these institutions to ensure good pass percentage of their students. Obviously one can argue that with MCQs and objective questions having become the norm, manipulation becomes easy. Can we therefore conclude that exams largely based on MCQs serve the vested interests which are well-entrenched in the educational setup.

More so, these institutions have been modelled on the pattern of tuition academies which had mushroom growth from 1980s onwards. Needless to emphasise, they prosper at the expense of government schools and colleges.

The consensual take on that particular situation among the educated people is very critical; nevertheless, that catastrophic practice continues with impunity. Rote learning and sheer absence of critical thinking is an established norm resulting in the socio-moral degradation of our society.

The aggregate that students score at matriculation and intermediate levels is absolutely mind-boggling. The student securing the first position at the Lahore board for Secondary Education scored 1087 out of 1100 marks. The merit for the students in the category of premedical at GC University Lahore closed down at 1057 which is 95 per cent of the total marks. Is not it amazing? The students scoring 90 per cent don’t stand any chance of getting into medical colleges.

Testing students with MCQs tends to contravene the very rationale of examination. In the current milieu, the spirit — in which the examination was held as a universal means of assessing what individual knew and how well they were able to reason out — is lost irretrievably. When the formal written exams were first introduced in China around 210 B.C.E., to hundreds of aspirants competing for civil service jobs, the spirit was the same as mentioned above.

One should be mindful of the fact that the MCQs are “best adapted for testing well-defined or lower-order skills”. The higher order reasoning skills are better assessed through short-answer and essay tests. It has been noticed that multiple choice tests are usually preferred not because of the type of knowledge being assessed but because such an exercise is cost-effective and practically convenient for testing a large number of students. This has become an established norm in countries like United States and India where the sample size of test-takers is considerably large.

Yet one can say with a degree of certainty that this practice does not suit Pakistan; therefore we must go back to the system of the yore.