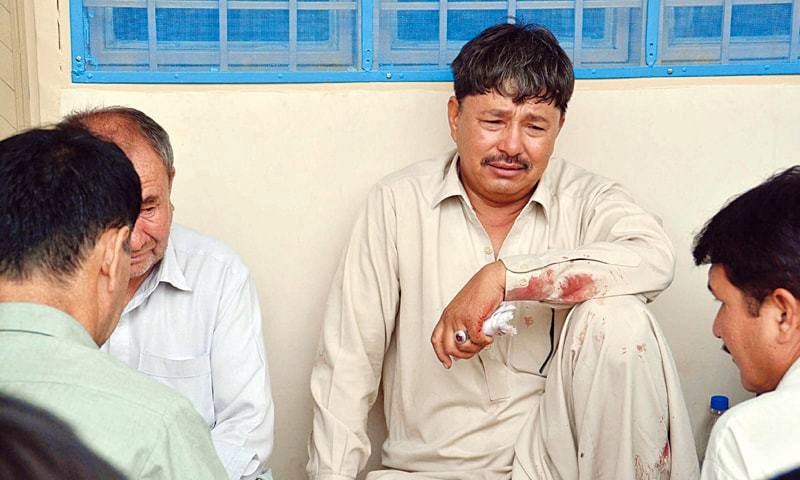 QUETTA: There was always that cloud of fear whenever Murtaza Ali’s parents put him on a bus to Karachi or had to wait for him to arrive home in Quetta for the Eid holidays. For the 24-year-old Hazara student, like most members of the ethnic community, travelling by road in and out of Quetta or even out of Hazara localities could prove to be a life-or-death gamble.

Like most Hazara parents, Murtaza’s father Captain Safdar Ali, too, would be under constant anxiety till his son arrived safely at his intended destination. “Murtaza would sometimes mind that because I would call him again and again till he got to his destination,” says Mr Ali.

Shortly before Murtaza was shot dead on Wednesday, along with three members of his community, near the Chutho village of Mastung, nearly 49km away from Quetta, his father had placed the Holy Quran on his head and had sent him off with prayers.

The Hazaras of Quetta had migrated from Hazarajat in Central Afghanistan in the 1880s to escape persecution at the hands of Afghan King Abdul Rehman. Gradually, they settled on the western and eastern outskirts of Quetta. Mr Ali lives in the western outskirts in a place called Hazara Town.

As many as 200,000 members of the Hazara community reside here. A narrow road leads up to Block 2 where the bereaved family lives.

Mr Ali had worked as a paramedic at the Helper Eye Hospital on Sariab Road for over 20 years. He explains that he resigned in March last year, before his superannuation, because, “twice, I was followed by unidentified people while leaving Helper Eye Hospital. I escaped miraculously”. He recalls how he discussed the matter with his wife and “we agreed that I would resign and that my retirement funds would be invested in my son Murtaza’s future”.

Murtaza had been born and raised in Hazara Town. He had studied at the Perfect Model High School and enrolled in the Government Science College, situated in the heart of Quetta, for his bachelors degree.

“My son began his studies at the Government Science College just as a wave of Hazara killings and bombings had begun. He could not attend college regularly due to security issues and failed in a subject,” Mr Ali recalls.

When Murtaza finally told them that he wanted to learn graphics designing in Karachi, the parents were glad. Karachi would have been safer for their son.

“He was an ambitious and talented boy. He would teach children in Hazara Town when he visited during his holidays in Quetta,” he says.

“He was returning to Karachi so he could take his last test in graphics design. I had saved up to fund his further studies in Lahore, as his name was on the waiting list of the National College of Arts (NCA).”

Recounting the dreams for his son’s future, the father breaks down. “What was his sin that he was shot 18 times?” At the imambargah in Hazara Town, Muhammad Moosa, a labourer, is mourning the deaths of his wife Rukhsana Bibi and 19-year-old son Muhammad Asif — both of whom were on the ill-fated vehicle that was targeted on Wednesday. His wife, who had fractured a disc in her backbone, had to travel between Quetta and Karachi for treatment every two months.

“I am unemployed…I lost a leg after slipping down a flight of stairs and have been unable to work since. I had taken a lot of loans to afford my wife’s treatment. This time when she left for Karachi, I told her to tell the doctor that we could no longer afford her treatment and that this would be her last visit,” he says.

The distraught man recalls that his son had wanted to follow in the steps of one of his uncles and join the army. “I told him he couldn’t because he had quit his studies after grade three!”

In Block 2, Mr Ali recalls that his grandfather Ali Raza had fought for Pakistan in the 1965 and 1971 wars with India. “We have certificates for that…Is that the reward we get? I lost my young son!”

Three men arrive at Mr Ali’s house just as I am about to leave. One of the men, dressed in plain clothes, identifies himself as a policeman from Mastung and hands Mr Ali a bag. Tears roll down the father’s face as he picks up Murtaza’s bag with all his belongings.