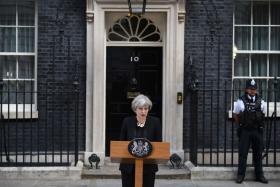 Was that really the best Theresa May could do? It was the same old tosh about “values” and “democracy” and “evil ideology”, without the slightest reference to the nation to whom she fawns – Saudi Arabia, whose Wahhabist “ideology” has seeped into the bloodstream of Isis, al-Qaeda and the Taliban.

Tony Blair used the same garbage language when he claimed – untruthfully, of course – that the 7/7 London bombings had nothing to do with Iraq. He, too, like George Bush, claimed that they were perpetrated because the bombers hated our values and our democracy, even though Isis would have no idea what these values were if they woke up in bed next to them.

And then there was the patronising monomorphic language that our wretched Prime Minister used, as if everything she says is false. Which it is.

“Enough is enough.” What on earth does that mean? “Terrorism breeds terrorism.” What nonsense. It’s the same baby language as “Brexit means Brexit”, the double emphasis mere proof that May has lost the ability to convince us of anything she says.

Jeremy Corbyn – not, I have to admit, one of my heroes – got it right. May needs to talk to us about the “difficult conversations” she must have with the Saudis and their Gulf allies, not to Muslim British citizens. But she is too gutless, too cowardly, to deal with the Gulf Arab autocrats to whom she sells weapons, whose principal Arabian dictator, the head-chopper-in-chief, is so worthy of our mourning that May’s predecessor lowered the British flag to half-mast on his death.

Yes, to confront this Salafist-Wahhabi state and Gulf citizens’ financial contributions to Isis would be a “difficult conversation” indeed for Theresa May. Instead, she’s going to have her “embarrassing conversations” with Britain’s Muslims who have no power to switch off the “evil ideology” which Wahhabism represents.

She does have that power. But she won’t use it.

It was laughable to hear the Prime Minister utter the awful clichés that she has obviously picked up from the world of business – she spoke of “safe spaces”, for example, three times. Those of us who have been attacked with abuse and hatred on the internet for more than two decades could have told her there was a problem here a long time ago. But she’s only just grasped it. Hence her disturbingly Orwellian intention to “regulate” the internet.

Had she used it in 1998, for example – May was already an MP back then – she would have noticed a sermon by a prominent Wahhabi Muslim clergyman who called upon God “to seize the Jews and Christians in the grip of your punishment … send down upon them a torment most grievous … they have filled the entire world with tyranny, oppression and sins … We seek thy protection against their evil”. This was preached at the Great Mosque in Medina in Saudi Arabia. But this “evil ideology” can still be found on the internet – and nor, I suspect, has Theresa May any intention of “regulating” it now.

A Muslim friend, listening to May’s schoolyard sermon outside Downing Street, wondered if British politicians had not lost their sense of ability to speak with dignity. How dare she talk down to her own people with such childish lessons? And how could one not wince at her reference to British “military action” in the Middle East – the very foreign policy which, along with America, led us into war with the Arabs so many times. One thinks of British “military action” in Palestine and Suez. And now in Iraq and Syria. Yet we continue grovelling to the Gulf monarchies as we assist them in their criminal campaign in Yemen.

And still May will not say what she knows to be true: that Britain can no longer expect to go on foreign adventures and be safe at home.

When Britain fought in the Korean War, no North Korean or Chinese person came to bomb London buses and tube trains. When America waged its bloody campaign in Vietnam, no Vietcong or North Vietnamese person arrived to attack New York or Washington. But those days are over. This is a terrifying lesson because the politicians who support our disastrous wars in the Middle East are safe from its effects. It is the truly innocent – the children, the young, the vulnerable: the very people defined by that incomparable word civilians – who pay the price at the hands of Isis’s insufferable, cruel murderers. It is these innocents who must endure “torment most grievous”.

It is, of course, well past time to change our foreign policy in the Middle East.

Heaven spare us, we shall soon see British politicians, on the 100th anniversary of the Balfour Declaration, congratulating Israel even as it continues to steal land from Arabs for Jewish colonies on the occupied West Bank. What Britain so sorely lacks is a thorough reappraisal of its entire relationship with the Middle East, especially with the Arab dictators and torturers whom we arm. We may frolic with these men for their money but our dalliance is a disgrace to Britain. “Things need to change,” as May lectured us. But this would need a change of prime minister.

Because such a policy needs real courage. It’s easier to threaten UK Muslims with “embarrassing conversations” than to threaten our “moderate”, autocratic allies. For that would indeed need courage.

Courage needs courage, as our Prime Minister might say. But that, Theresa May does not have.