Home  »  Newspaper Articles   »   Trump, Salman and Netanyahu: The match made in Hell 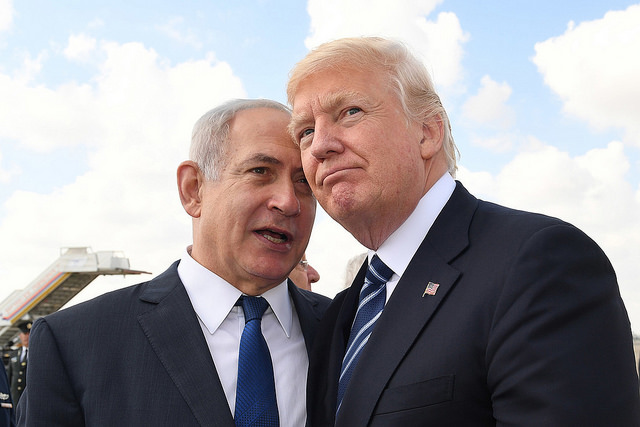 As United States President Donald Trump struts his limited stuff across the international stage, his ‘accomplishments’ during this tour will benefit no one but the wealthy elites at home and abroad. Let us look first at his time in Saudi Arabia, and what that means for the U.S. and the Middle East.

The reality-tv-star-turned-president signed a $100 billion weapons deal with the Saudi kingdom. If anyone in power in the U.S. would like to look closely at this, he/she would find that this deal is, in all likelihood, illegal. It seems that Mr. Trump and Congress should be reminded of the U.S. law referred to as the Leahy law; it is described thusly:

The “Leahy law vetting is a process through which the U.S. government vets U.S. assistance to foreign security forces, as well as Department of Defense training programs, to ensure that recipients have not committed gross human rights abuses.  When the vetting process uncovers credible evidence that an individual or unit has committed a gross violation of human rights, U.S. assistance is withheld, consistent with U.S. law and policy.  This obligation to vet foreign security forces can be found in section 620M of the Foreign Assistance Act of 1961 (FAA).”

So, based on Mr. Trump’s action, one would think that Saudi Arabia does not commit “gross human rights abuses”. A look at a report from Human Rights Watch about Saudi Arabia is instructive:

“Through 2016 the Saudi Arabia-led coalition continued an aerial campaign against Houthi forces in Yemen that included numerous unlawful airstrikes that killed and injured thousands of civilians. Saudi authorities also continued their arbitrary arrests, trials, and convictions of peaceful dissidents. Dozens of human rights defenders and activists continued to serve long prison sentences for criticizing authorities or advocating political and rights reforms. Authorities continued to discriminate against women and religious minorities.”

ell, what’s a little crime against humanity when $100 million is on the table? And what a benefit to those holding stock in the so-called U.S. ‘defense’ industry! A report in Moneywatch from May 22 of this year is headlined: ‘U.S. Defense Stocks Jump on Saudi Arms Deal’. The article is very clear: “Investors hailed President Donald Trump’s visit to Saudi Arabia by boosting the share prices of major U.S. defense contractors. Their stocks advanced on Monday in the wake of announcements of arms sales to the kingdom that could be worth $109 billion over the next decade, one of the largest-ever deals of its kind.”

The article continues with rather puzzling information: “The Saudi Arabian deal could lead to additional sales for both Israel and the Persian Gulf countries, all of which are concerned with Iran’s aggressive foreign policy and its support for terrorist groups in the region.”

Now, this simple statement requires further study. We will break it down to its component parts and attempt to make sense of it.

Once again, perhaps we could consider the Leahy Law, referenced above, and see just what Human Rights Watch has to say about Israel: “Israel continued in 2016 to enforce severe and discriminatory restrictions on Palestinians’ human rights, to facilitate the transfer of Israeli civilians to the occupied West Bank, and to severely restrict the movement of people and goods into and out of the Gaza Strip.” There is more, but for our purposes today, this will suffice.

If we are to talk about ‘aggressive foreign policy’, perhaps we should point out that the U.S. is currently bombing six countries, including Afghanistan, Iraq, Libya, Somalia, Syria, and Yemen. Its minions are causing tremendous unrest and suffering in Venezuela. It might also be worth noting that, since World War II, the United States has either invaded or intentionally destabilized at least thirty-three (33) countries, including Angola, Argentina, Bosnia, Brazil, Cambodia, Chile, China, Cuba, Democratic Republic of Congo, Dominican Republic, El Salvador, Greece, Grenada, Guatemala, Indonesia, Iran, Iraq, Korea, Kuwait, Laos, Lebanon, Libya, Nicaragua, Panama, Peru, Philippines, Poland, Somalia, Sudan, Syria, Tibet, Turkey and Vietnam. Some of these countries have been invaded by the U.S. more than once in that time. This doesn’t include Palestine, which the U.S. has only bombed by proxy, by giving Israel the weaponry and the permission (cover at the United Nations) to bomb that country.

We should also not forget that the U.S. is the only country to have ever used nuclear weapons, bombing two, heavily-populated cities in Japan that had no military importance. Hundreds of thousands died, some instantly, and other later, as a result of the horrific injuries they suffered.

And as far as support for terrorist groups is concerned, the U.S. military can be seen as the biggest, most powerful and most dangerous terrorist group in the world. And there is ample evidence to suggest that the U.S. initiated ISIS, and supports groups that actually fight each other.

We would look at the list of countries that Iran has invaded since World War II, but there are none to see. So any ‘fear’ of Iran’s ‘aggressive foreign policy’ is being invented by the U.S. to sell weaponry, and to help Israel maintain military superiority in the Middle East.

We will now turn to Israel, and the president’s short visit there. Certainly, there can be no doubt that Mr. Trump is an adoring Zionist, willing to kiss the feet of Israeli Prime Murderer Benjamin Netanyahu. He has proclaimed that he can make a ‘deal’, settling the ‘conflict’ between Israel and Palestine. He never refers to ‘occupation’, ‘human rights’ or ‘international law’ in the context of this ‘conflict’.

But, significantly, prior to his visit, he back-tracked on one of his main Zionist promises, the vow to move the U.S. embassy from Tel Aviv to Jerusalem. This may be because the only other nation on the planet that supports such a move is Israel, and it is vehemently opposed by everyone else. It appears that even the immature, narcissistic Mr. Trump can be prevailed upon when the opposition is strong enough.

Nothing of any significance was done in Israel, either helpful or detrimental to Palestinians. What Mr. Trump may have said to the Israeli Prime Murderer about compromising Israeli intelligence during his meetings with Russian diplomats, is unknown, although he has denied ever having done any such thing. The confusion by his staff over where the Western Wall is located, Israel or Palestine (it’s in Palestine), did not sit particularly well with his apartheid hosts. And his sunny optimism about brokering a deal was generally dismissed as the nonsense that it is.

If Mr. Trump has any thoughts in his rather limited brain, he must realize that the controversies he left behind in Washington, D.C. will still be there when he returns. He will dismiss them, no doubt, and talk about his successful visits to the Middle East and the Vatican (heaven only knows what he and the most progressive pope in centuries will have to talk about).

To summarize: one of the world’s most egregious violators of human rights has struck an historic weapons deal with another one, the U.S.; no discussion of those human rights abuses is known to have occurred. Israel hosted the U.S. president, but nothing of substance, other than a strengthening of the ‘special relationship’ the U.S. has with that apartheid nation, was accomplished. And next stop is with a religious leader who has condemned war and capitalism, two of Mr. Trump’s disreputable gods.

Much as one would like to see Mr. Trump leave office, the thought of his vice-president, the Zionist, Christian-right conservative Mike Pence taking the reins, is, perhaps, even more frightening.

What happens next in foreign or domestic policy remains to be seen, but the indications are not favorable for any but the ruling elite.