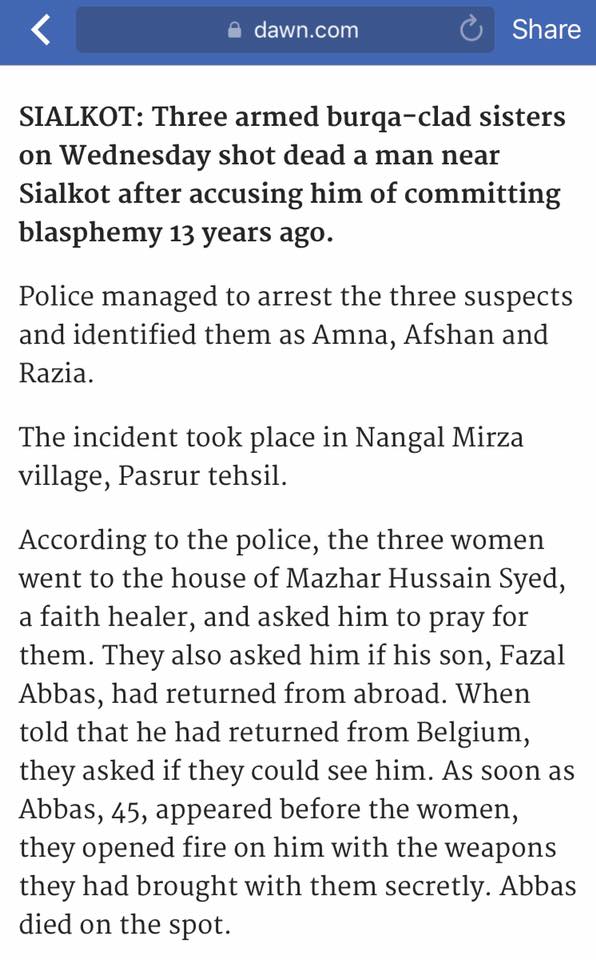 #FazalAbbas a Shia Muslim was shot dead by 3 Burqa clad Deobandi women who sneaked into his house on false pretences. His alleged crime was the “blasphemy” of being critical of Caliph Yazeed Bin Muawiya – a Deobandi icon who massacred the Holy Prophet’s family at Karbala.

Abbas was alleged to have made these critical remarks 13 years ago! He was not even based in Pakistan anymore but was visiting from Belgium. He is one of thousands of Shia Muslims who have been lynched, massacred, bombed and targeted collectively for the critical remarks made against Caliph Yazeed and other historical personalities excluding the Holy Prophet.

In the 1980, Pakistan’s military dictator General Zia ul Haq publicly sponsored and supported the establishment of the Deobandi terrorist group Sipah Sahaba (Protectors of (the Honour) of Companions) whose stated goal was to kill anyone who “blasphemed” against a certain set of historical figures. General Zia also codified the Blasphemy clause into Law. Exceptions were made when fellow Deobandis like the evangelist Junaid Jamshed engaged in this form of criticism.

Those who correctly condemned the brutal lynching of #MashalKhan for the alleged crime of blasphemy conveniently omitted the context of General Zia and Sipah Sahaba’s role. This blatant dishonesty is laced with sectarianism.

Free Speech and Freedom of religion cannot be selectively implemented. Pakistan’s Neoliberal hypocrites do their best to omit the context of how Blasphemy was codified into law and how Sipah Sahaba established that collective violence against vulnerable groups was kosher.

Acknowledging this context also exposes the hypocrisy of those who selectively protest against the Blasphemy Law. When it comes to Shias being targeted by this concept, many liberal hypocrites justify the murder of Shias as part of some fictional “proxy war”