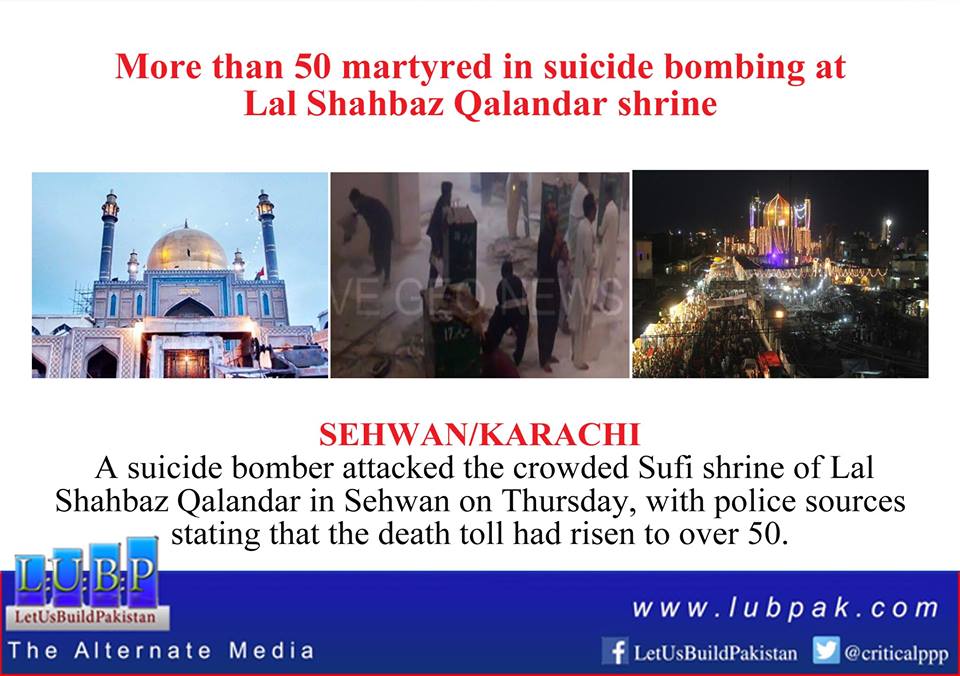 It is quite puzzling to see the disproportionate blame for the Lal Shahbaaz Qalandar suicide attack being placed on the provincial PPP government’s incompetence in not building a hospital near the shrine. There is much to blame the PPP government; including their inability to make hospitals nearby. But the disproportionate outrage on this issue is both counterproductive and actually serves a a diversionary tactic to take the blame away from the ISIS-affiliated Deobandi terrorist groups who perpetrated the blast.

The major sin of the PPP is their surrender to Deobandi terrorist and ideologue groups such as the ASWJ-LeJ. The former CM and the opposition leader Khurshid Shah have publicly hobnobbed with ASWJ-LeJ leadership. PPP has also capitulated to the mass proliferation of JUI’s Deobandi madrasahs across the length and breadth of Sindh. These madrasahs have changed both the demographics and ethos of Sindh’s ancient culture.

The PPP should have built proper hospitals but then again, it is the proven tactic of Deobandi terrorists to first strike at their targets and then immediately target the hospitals that the victims are treated in.

This happened in Quetta (lawyers blast), DG Khan, Chehlum in Karachi and the 2010 attack on Ahmadis in Lahore. Perversely, Deobandi terrorists are known for bombing hospitals in the immediate aftermath of conducting terrorist attacks. In Karachi – a stronghold of MQM- Deobandi hospital staff have admitted to facilitating the deaths of the wounded victims (of terrorism) after they have been rushed to the city’s premium hospitals.

Curiously, the Federal Government has been mostly absolved for the terrorist attack in Lahore which has been blamed on the victims, cricket haters, CPEC opposition and RAW.

This bait and switch tactic of the disproportionate and inaccurate criticism of the PPP by social media activists like #JibranNasir only serves as an obfuscation. It absolves the Deobandi terrorists as well as their handlers and creators in the PML N government as well as the Security establishment.

It absolves the decades old policy of Strategic Depth for which the State apparatus was deployed to create Salafi and Deobandi terrorists for proxy wars.

Jibran Nasir could be better served by asking PPP socialite Sherry Rahman on why she promotes hate mongering clerics like Tahir Ashrafi and why her Jinnah Institute publishes reports that try to mainstream and justify the Taliban.

This tactic absolves the Saudis for funding the vast Deobandi madrasah networks all over Pakistan who are deadly opposed to the fraternity and tolerance that is emphasised at these shrines.

This tactic is seeped in selective outrage, hypocrisy and self righteousness that ironically absolves PPP for its real sin in capitulating to the terrorists – the same terrorists that murdered hundreds of PPP activists including its leader, Benazir Bhutto.