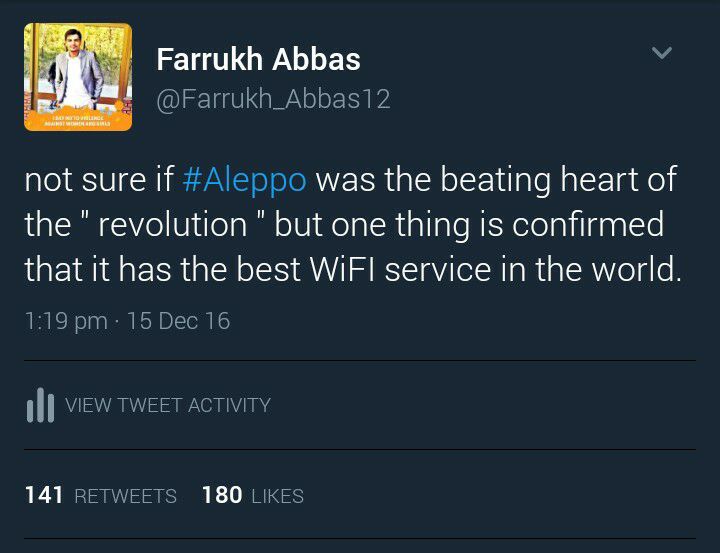 The liberation of Aleppo by the Syrian government forces has united two seemingly disparate groups who are essentially using the same sectarian incitements. On the one hand, there are Pakistan’s banned outfits. On the other hand are established and budding members of the civil society intelligentsia who are using the same rhetoric of banned sectarian terrorist organisations in their prejudiced commentary on Syria.

The following commentary and links on social media expose the staged news and videos.

Here’s the truth about the war in Syria:

For the past five years, the US and its allies have been supporting terrorists in Syria in an effort overthrow Assad in what amounts to a war against the Syrian people.

The US government has spent over $1 billion training and funding terrorists. There are no moderate rebels in Syria. They are supporting the Syrian Al Qaeda affiliate Al Nusra and ISIS. The opposition forces are completely sectarian, not united in any way, and there is little to no chance that they could help form a competent government if the current one was overthrown. The terrorists intentionally establish bases in places like hospitals and force civilians to remain in rebel-held areas as a buffer, so that when airstrikes target their bases, they have propaganda to feed to the Western media. But Syrian civilians have fled en masse to the areas controlled by the government, and are constantly being targeted by the terrorists- these attacks are never reported by the Western media because it does not support Western interests to view the rebels as terrorists.

The Syrian people wanted no part of this war and support Assad in large numbers- they held an election in 2014 in which Assad won the majority of the vote, with about a 75% turnout of the Syrian people. It was largely dismissed by the West of course, but the election did happen and there is plenty of evidence for the massive turnout.

Western interest in Syria comes down to money, of course. They planned to use western Syria to build an oil pipeline from Qatar through Syria to Turkey to supply Europe and America, while a competing Russia-backed pipeline wished to bring oil from Iran through Syria.

Meanwhile, Western mainstream media has glorified the “White Helmets” as a Non-Governmental Organization that is rescuing tens of thousands of Syrians from the horrors imposed by the Syrian and Russian airstrikes in rebel controlled places like eastern Aleppo. They claim to be independent from any foreign funding and totally impartial in the Syrian conflict, made up of everyday Syrians just trying to help in any way possible. There is a well-funded and beautifully directed documentary on Netflix (The White Helmets) which shows them rescuing people and children amidst bombings. The White Helmets were even nominated for a Nobel Peace Prize.

But in reality, they are funded extensively by foreign governments (including at least $23 million from the US), and are used primarily as propaganda for imposing a no-fly zone and overthrowing the Syrian “regime”. They only operate in terrorist controlled areas, meaning 1) they do not assist any civilian victims in government controlled areas, and 2) they are not targeted by the opposition forces. At best they are a Western funded humanitarian force that is friendly with terrorists and used heavily for agenda-driven media propaganda.

However there is plenty of evidence to suggest that they are one and the same as the terrorist organizations such as Al Qaeda, operating as white helmets by day and as militant terrorists by night. They also provide a means for the terrorist groups to freely travel to Turkey. And there is evidence that much of their humanitarian rescue efforts are in fact staged (for example they have pulled the same children out of wreckage at different sites on different dates, or this blunder: https://www.youtube.com/watch?v=Zgl271A6LgQ, or this obvious staging: https://www.youtube.com/watch?v=vDahN6tv1dA). The linked video shows plenty of that evidence.

America is on the wrong side of this conflict, and the Syrian people are paying the price.

Here are some of the articles and videos I drew from to gather these conclusions: 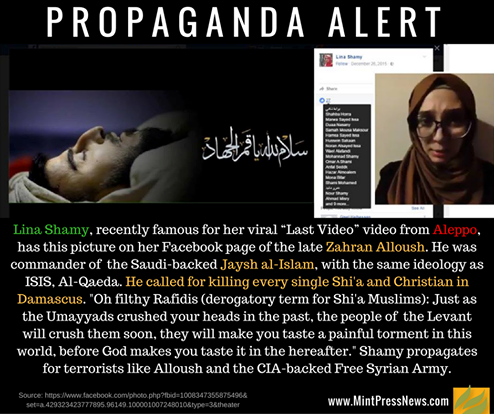