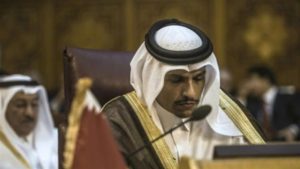 Qatar says it will continue to supply terrorist groups in Syria with arms even if US President-elect Donald Trump halts US support.

According to Press TV, Qatari Foreign Minister Mohammed bin Abdulrahman bin Jassim Al-Thani made the remarks on Saturday in relation to Trump’s recent remarks signaling that he is opposed to US support for anti-Syrian government terrorist groups.

Trump has also suggested that he might even side with Russia in their fight against Daesh in Syria. In a last month interview, Syrian President Bashar al-Assad noted that Trump may be a “natural ally” if he decides to “fight the terrorists.”

During a March interview, Trump said that the US “approach of fighting Assad and Daesh simultaneously was madness, and idiocy. You can’t be fighting two people that are fighting each other, and fighting them together. You have to pick one or the other.”

He noted that Qatar would not be supplying the militants with shoulder-fired missiles for the time being and that if Syrian forces retake the divided city of Aleppo, the militants will always have the “ability to capture it back.”

Aleppo, Syria’s second largest city, remains divided between government forces in the west and foreign-backed terrorists in the east, making it a frontline battleground.

On September 22, Syria announced the start of a new military operation in Aleppo aimed at driving out the terrorists occupying the eastern part of the strategic city