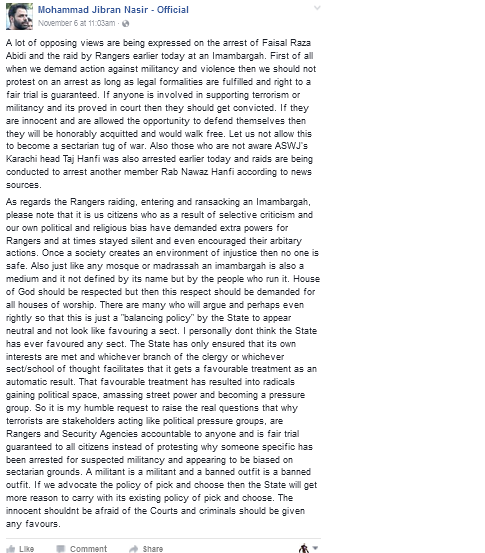 Jibran Nasir needs to stop telling us what to do!

Jibran Nasir recently felt the urge to tell us what we should do, be it arranging protests for Faisal Raza Abidi’s release or affecting the operation in any possible way.

“First of all when we demand action against militancy and violence then we should not protest on an arrest as long as legal formalities are fulfilled and right to a fair trial is guaranteed,” says Nasir. I have a problem with the ‘we should not protest’ part. If someone is protesting against his arrest, are they venerating a criminal? Any charges proven? Any conviction? No.

He goes on to say that we should ‘not allow this to become a sectarian tug of war’. This is one subtle tactic that we are all familiar with. We will label any rights movement ‘sectarian’ or ‘nationalist/separatist’ to suppress their voice and fight for rights. If Shias are being targeted for their beliefs, proof of which are statements of any leader of ASWJ, they have every right to fight for their right to religion. Of all people, Nasir, who claims to be a human rights defender, should refrain from resorting to such tactics.

I agree with his stance that many of us are responsible for demanding extra powers for Rangers and have stayed silent and even encouraged their arbitrary actions.

Nasir is perhaps right about the fact that the State has no sect and will only ensure its own interests – proof of this is the fact that the chief minister of Sindh is Shia and the IG is an Ismaili, yet Shias continue to get targeted in this very province, particularly in Karachi.

In his concluding paragraph, he goes on with his nauseating neutrality and requests us to ‘raise the real questions’, which includes the question of security agencies’ accountability – the very security agencies who he justified in his preceding paragraph for raiding and desecrating the imambargah by his absurd equation of a madrassa and imambargah. He then goes to discourage people from protesting over ‘why someone specific has been arrested for suspected militancy’ and from ‘appearing to be biased on sectarian grounds’. Protests are the right of any democratic people. Nasir can seriously take a back seat now because we are not falling for the nonsensical labelling of bias over sectarian grounds. If fight for rights is sectarian to him, he can rant all he want for all I care.

Many of us have neither stayed silent or encouraged the arbitrary powers of the Rangers. This is not only another False binary, it is blatantly untrue. KZ protested Rangers actions against MQM. On the contrary, it is Jibran Nasir who publically castigated and backstabbed KZ for not coordinating his protests against Lal Masjid.  It takes a special kind of degeneracy to make the comparisons that Jibran has made”