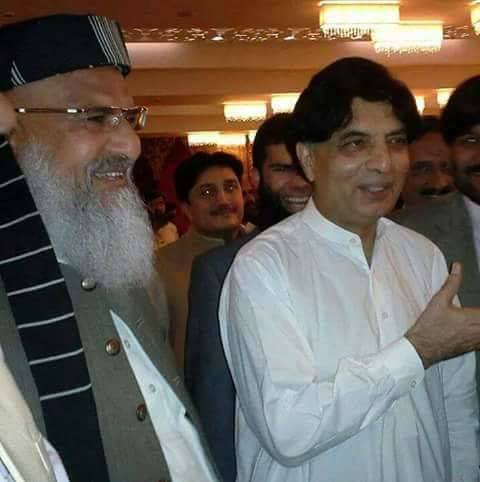 We can see that after exclusive meeting with COAS Raheel Sharif, PM Nawaz Sharif, CM Punjab Shahbaz Sharif, Finance Minster Ishaque Dar allowed a banned Takfiri ISIS affiliated Deobandi #ASWJ aka #SAP/ LeJ to hold a public meeting in Islamabad. In that meeting anti-Shiite slogans were being chanted and Takfiri hatred was spread through loudspeakers and violated 144. This is not first time happened when PML-N and Sharif Brothers ( who are Gods of our some liberals and anti-Establishment Devtas) used Takfiri Deobandis to counter their political opponents and gave free hand Takfir Deobandi Goons to do their hateful job. We saw such things happened during sit-in episode of PTi-PAT and 14 people including women were killed in Model Town.

After meeting with COAS PML-n used police and FC against workers of PTI on one side and on other side gave free hand #ASWJ and #JUD of Hafiz Saeed. This shows that Takfiri Deobandis and Salafi so called Jihadis are not only assests of Military Establishment but also of PML-N.

Liberal Commercial Mafia again is shying to reveal this reality. Fake Liberal God Nawaz Sharif and Fake Emancipater General Raheel Sharif once again have been exposed and unmasked. They are on same page in case of getting help from Takfirists and Jihadists.