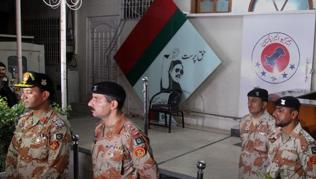 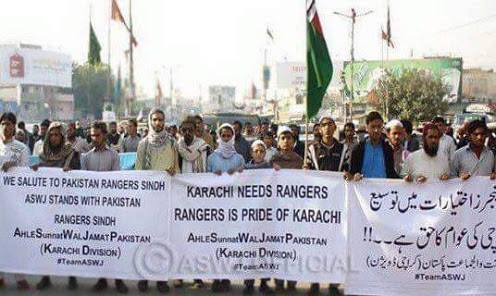 Three pictures above tell a story.

Farhatullah Baber’s statement is on the record in which he had called Rangers as discredited organization after sending fake report of a dubious NGO about non-violation of human rights in Karachi during operation.

Where are our so called law abiding citizens who are shouting against Altaf Hussain, Harbiyar Marri , Karima Baloch, Brahamdagh bugti, Dr. Allah Nazar and against all those dissenting voices who show us those ugly scenes of Pakistan which are being created by state institutions.

One is my friends from moderate Sunni community reveals that Rangers in Sindh does not go after ASWJ or raid on head office of ASWJ because DG Rangers Bilal Akbar is former student of Deobandi religious seminary Jamia Ashrafia as he admitted himself during his speech in notorious Takfiri Fascist Deobandi seminary Jamia Banoria Karachi.

Why is commander of Pakistan Army in Karachi Naveed Mukhtar is silent on activities of a declared banned terrorist organization?