Home  »  Original Articles   »   Barbarians inside the gates- by Alexander Athos

We in the West are so gentrified that we think that others in the world share our values and its no harm to our body politic to allow preachers of hate and intolerance to enter into our society and brainwash our Muslim citizens.

Take for example how we in Greece allow the radical dawah activity of an Athens based Muslim Association named “El-Rahman” which runs thewww.islamforgreeks.org  website which is a Wahhabist outreach controlled by Ahmed Eldin and Mohi Eldin Ahmed Ali to radicalize as many Greek people as possible to the puritanical Wahhabi Salafi sect of Sunni Islam.

‘Wahhabism is an extremist, puritanical and intolerant strand of Islam which is the official state religion of Saudi Arabia. Since the 1960s Wahhabism fueled with Saudi money has spread all over the world. Osama bin Laden, the leader of Al-Qaeda, a Saudi himself is considered to be an advocate of a more militant form of Wahhabism known as neo-Wahhabism.’ 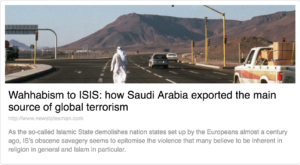 See Articles on the sect of the Wahhabi-Salafi: 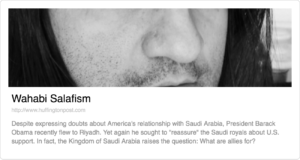 See article here on the Takfir aspect of the Wahhabi-Salafi puritanism: 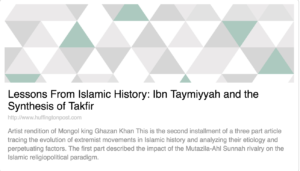 “Riyadh has underwritten Islamic radicalism around the world. The government funds fundamentalist madrassahs even in Europe and America. Intolerant Wahhabist teaching creates the foundation for violence. (Under pressure the kingdom is addressing intolerance in domestic school textbooks.) While the royal regime apparently has not directly supported terrorism, individual Saudis have, both funding and joining al-Qaeda (providing 15 of the 9/11 terrorists). The George W. Bush administration refused to release a 28-page section of the 9/11 report dealing with apparent Saudi support for terrorism. Wikileaks disclosures indicated that Secretary of State Hillary Clinton acknowledged the continuing flow of Saudi money to terrorists. 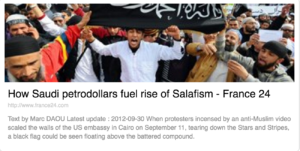 Finally, the kingdom does not share values with America, democratic or other. Saudi Arabia is at best a slightly more civilized variant of the Islamic State. Intolerance toward religious minorities, mistreatment of women, dictatorial politics, employment of religious police. What’s the real difference? ” See Article: 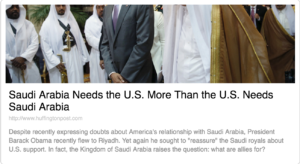 In the aftermath of the Paris and San Bernardino attacks, the world can no longer afford apologist and politically correct discourses on terrorism. see article: 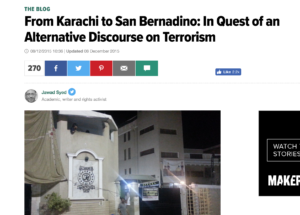