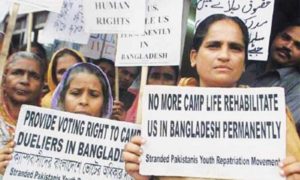 Pakistan is an unfortunate country where a majority of its population is busy harming the country by carrying out corruption, terrorism and making money through unethical and illegal ways. These traitors claim themselves to be the most patriotic and sincere within the country, but this could not be any further from the truth. If we try to reveal it, we will only find the tale of pain and misery. History is witness to those who have sacrificed the most for this country, and they have always become victims. Biharis are a prime example of this gross injustice. They have sacrificed their lives, wealth, honor, and everything they had for this selfish nation twice but in return, were sentenced to miserable lives in refugee camps in Bangladesh for almost 45 years.

In 1947 during the time of partition from India, 7.5 million Muslims migrated from East to West Pakistan, 1.3 million Muslims migrated to East Pakistan, one million from Bihar, and the rest was from Orissa and West Bengal. Due to vicious communal riots Biharis had to take shelter in East Pakistan. They were living very peacefully with the Bengali population till 1971. In 1971 during the “Bangladesh Liberation War”, Biharis had provided their support to the Pakistani military. They believed their support will help save their homeland but little did they know that their country would betray them upon the conclusion of the war.

During the war, large numbers of Bengalis had been killed by the Pakistani military. According to Bangladeshi authorities, 3 million were massacred during the war. The Hamoodur Rehman Commission states the death toll is at 26,000. Independent researchers estimate the figure ranges from 300,000 to 3,000,000 and the United States intelligence agency, the C.I.A., and the State Department estimates that 200,000 people had been killed in the genocide. Additionally, a large number of Bengali women were raped by the Pakistan military. During the war, a fatwa (declaration) in West Pakistan endorsed that the Bengali ‘freedom fighters’ were Hindus and that their women could be taken as the ‘booty of war’. Radical Muslim scholars publicly declared that the Bengali women were ‘gonimoter maal’ (war booty) and thus they openly supported the rape of Bengali women by the Pakistani military.

Numerous women were tortured, raped and killed during the war. Bangladeshi sources cite a figure of 200,000 women raped, giving birth to thousands of war-babies. The soldiers of the Pakistani military and razakars (volunteers) also kept Bengali women as sex-slaves inside the Pakistani military camps, and many of these tortured women became pregnant. Additionally, a filthy role played by a radical group Jamaat-e-Islami can’t be ignored. They established militant squads with the help of Pakistani intelligence named “Al-Badr” and “Al-Shams” involved which were intricately involved in genocide, rape, and other war crimes. 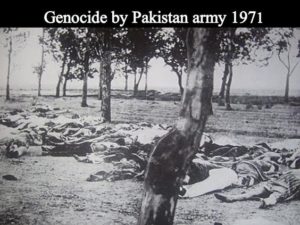 After the Pakistani army surrendered in 1971, a large number of the Bihari population was killed in retaliation and a massive number of women were raped by Mukti Bahini (Bengali militants) with the support of the Indian army. Since then, there are irreconcilable differences that arise between Bengali and Bihari communities.

Since 1971, the Bihari population is living in Bangladesh in a deplorable situation. Neither Pakistan nor Bangladesh has agreed to grant citizenship to the Biharis.

Following the war, the plight of the disenfranchised and stateless Biharis was apparent to the national and international community. Funding soon followed from various sources to rectify the sorry state of Biharis. However, their situation barely improved and its grim legacy is still evident today. This exploitation of Biharis for political purposes is the Pakistani way.

The “International Committee for Red Cross (ICRC)” built a large number of camps in Bangladesh in 1972 to assist this community. The Biharis living in these camps are passing their days in a horrible situation. They do not enjoy any rights, nor are they considered to be citizens of Bangladesh. The human dignity of the Biharis is being undermined and undervalued. They are being constantly intimidated and humiliated in all aspects of their life. Many of their inherent and inalienable rights are being violated; their position in their society is being made increasingly insignificant. 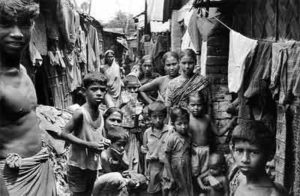 They have very limited access to formal jobs. Lack of work obstructs them from moving out of squalid slums for better living. Their poverty is deep-rooted, infinitive and multi-faceted. It relates not just to the absence of reliable incomes and productive assets; but also to scarcity of safe water, nutrition, health, education and shelter; to injustice, to lack of power and to continuing daily vulnerability, and to disaster and disease. They cannot get jobs, social security, and education.

Biharis were stateless until 2008 when a judgment by the Dhaka High Court gave them the right of citizenship. The judgment does not cover refugees who were adults at the time of Bangladeshi Liberation war. According to one estimate, at least 250,000 Biharis are still living in 70 camps in 13 regions across the Bangladesh waiting for a miracle. 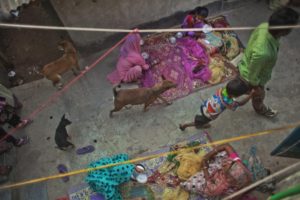 History from the perspective of Pakistan and Pakistanis always neglect to mention the hypocritical role of Pakistan who always claims to be a well-wisher of Muslims world-wide. But in fact plays a self-serving role to bolster its own political agenda. Biharis sacrificed themselves for the nation twice, yet they cannot be accommodated in Pakistan. Pakistan always gives the timeless excuse of its dire economic situation as the reason why it cannot accommodate Biharis. However, Pakistan can accommodate millions of Afghan refugees who made Pakistan hell through their criminal activities, promoting terrorism, violence, and drug trade and use. Pakistan has always played a hypocritical role by showing concern for Kashmir, Palestine, Bosnia, and Burma whilst completely ignoring the Muslims who sacrificed their lives, property, and privileges to save the homeland. The stateless Biharis were condemned to destitute lives in refugee camps. They are wasting away in the camps clinging to the false hope that one day this selfish and heartless Pakistani nation would understand and realize their sacrifices and make good on its promises. For these Biharis, it has become a modern tale of Waiting for Godot.