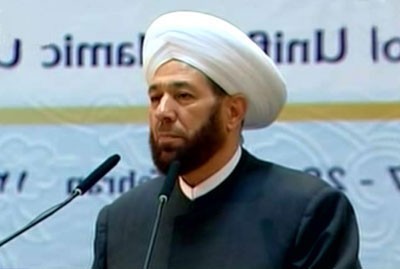 The Grand Mufti of Syria has consistently stood up to to the Takfiri Fascism of the Foreign Salafi Army (FSA) that is constituted from Al Qaeda and Ikhwan. He is at the forefront in supporting the Worlds most ancient Christian communities who are Syrians. He has consistently avoided the vicious and dishonest sectarian binaries peddled by Turkey, Qatar, Saudi Arabia and the U.S. and their media propagandists like Al Jazeera and CNN. He is a Sunni Muslim.

In Pakistan, we also have a notorious, allegedly foreign funded, opportunist who peddles the same dishonest binaries that one hears from Saudi and Qatari mouthpieces – binaries such as Sunni vs Shia/Saudi = Iran, Bani Ummayah vs Banu Hashim. He is employed to jump on every cause and swiftly hijack and obfuscate it. Lately, some of his collegues have suffered an embarrassing setback when they allowed this peddler of lies to micturate not just over their conference but also the cause they support. Currently, he is busy obfuscating and misappropriating the situation in Kashmir while also distancing himself from a corrupt rabid supportor of ISIS; the former Chief Justice. This peddler was a diehard supportor of this pro Taliban Chief Justice and publically supported the policy of setting terrorists free.

Those of my Friends in Syria who have bravely stood up to Takfiri Salafi fascism of Al Qaeda and provided the facts on the ground can relate to how such peddlers are financed – apparently/allegedly both the White Helmets and this Pakistani peddler have the same source of funding.