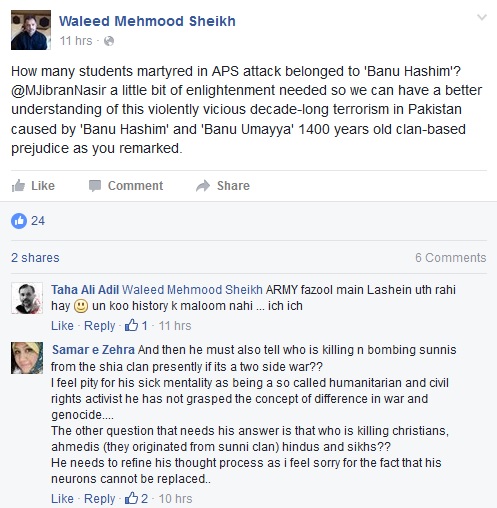 False Binary Peddler ‪#‎JibranNasir‬ has once again obfuscated ‪#‎ShiaGenocide‬ ; this time to a conflict between Banu Hashim, the family of the Holy Prophet and Banu Ummaya, the political dynasty that massacred the Banu Hashim in Karbala. FYI to Jibran Nasir: ISIS and FSA/Al Qaeda that is supported by his Deobandi bigot pals like ‪#‎IlmanaFasih‬ draws its inspiration from Banu Ummaya!

Incidentally, India’s notorious Saudi-sponsored Salafist proselytiser Zakir Naik uses a similar dishonest binary to Jibran’s to absolve Yazid (a Salafi idol) of the murder of Imam Hussain.
This is the same Jibran who draws a False moral equation between Deobandi terrorist groups and their Shia victims. He equates a Shia vigilante group that has been extinct for 20 years with the Sipah Sahaba and the Taliban. 70,000 dead Pakistani victims of Takfiri Deobandi terrorism must be wishing that Jibran’s lies were true because then there would actually be a Shia militia taking on the Taliban and preventing them from murdering our school kids. But this would be incidental because Jibran’s malicious intent is clear; i.e. To equate victims with their perps.

Jibran’s Rapidly declining coterie of Uncle Tom Shia apologists had been warned many times about this peddler of lies and how he will continue to betray the Shia victims of Deobandi terrorism – after all, he had even betrayed Shaheed Khurram Zaki on more than one occasion. But for some over inflated egos, the lessons have to be learned the hard way.

As hundreds of Afghanistan’s and Iraq’s Shias are massacred by Salafi-Deobandi terrorists, this Jibran Nasir continues with his insensitive apologist rubbish.

The Beena-Sethi Mafia and their protégés are best at selling blood and peddling half truths and lies.